Moustapha Akkad: Director of the Movie: The Message — Mohammad, Messenger of God 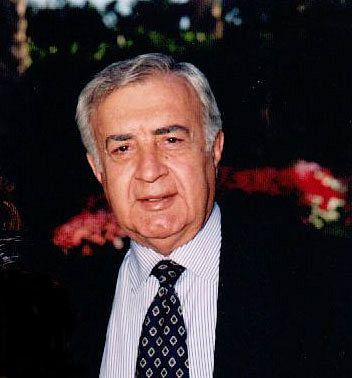 Moustapha Al Akkad (Arabic: مصطفى العقاد‎; July 1, 1930 – November 11, 2005) was a Syrian American film producer and director, best known for producing the original series of Halloween films and directing Mohammad, Messenger of God and Lion of the Desert. He was killed along with his daughter Rima Al Akkad Monla in the 2005 Amman bombings.[1][2]

Al Akkad was born on July 1, 1930 in Aleppo, Syria.[3] He received his high school degree from the Aleppo American College. His father, then a customs officer, gave him $200 and a copy of the Quran before he left for the United States to study film direction and production at the University of California, Los Angeles (UCLA). Akkad spent a further three years studying for a Master’s degree at the University of Southern California (USC), where he met the director Sam Peckinpah. Peckinpah became Akkad’s mentor in Hollywood and hired him as a consultant for a film about the Algerian revolution that never made it to the big screen, but he continued to encourage him until he found a job as a producer at CBS.

In 1976, he produced and directed Mohammad, Messenger of God (released as The Message in 1977 in the United States), starring Anthony Quinn and Irene Papas. Al Akkad faced resistance from Hollywood which forced him to make the film in Morocco.

While creating Muhammad, Messenger of God, he consulted Islamic clerics and tried to be respectful towards Islam and its views on portraying Muhammad. He got the Approval from “Al Azhar” in Egypt but was rejected by the Muslim World League in Mecca, Saudi Arabia. The Governments of Kuwait, Libya and Morocco promised to support the film financially, but when it was rejected by the Muslim World League, Kuwait withdrew its financial support. King Hassan II of Morocco gave his full support for the production of the film. The production took one year, Akkad filmed for 6 months in Morocco, but had to stop when the Saudi Government exerted great pressure on the government of Morocco to stop the production. Al Akkad went to Muammar Gaddafi of Libya for support in order to complete the project, Gaddafi allowed him to move the filming to Libya for the remaining 6 months until the film was finalized.

Al Akkad saw the film as a way to bridge the gap between the Western and Islamic worlds, stating in a 1976 interview:

I did the film because it is a personal thing for me. Besides its production values as a film, it has its story, its intrigue, its drama. Besides all this I think there was something personal, being a Muslim myself who lived in the west I felt that it was my obligation my duty to tell the truth about Islam. It is a religion that has a 700 million following, yet it’s so little known about which surprised me. I thought I should tell the story that will bring this bridge, this gap to the west.

In 1978, he helped make low-budget film history when he produced Halloween. Akkad became best known for his key involvement in the first eight Halloween movies, as an executive producer (the only producer to participate in all of these films). The series was highly profitable.

In 1980 he directed Lion of the Desert, in which Quinn and Irene Papas were joined by Oliver Reed, Rod Steiger, and John Gielgud. It was about the real-life Bedouin leader Omar Mukhtar (Quinn), who fought Benito Mussolini‘s Italian troops in the deserts of Libya. The movie is now critically acclaimed, after initially receiving negative publicity in the West for being partially funded by Libya’s Muammar Gaddafi, who invested $35 million in the movie. This negative publicity may have been the cause of its relatively poor performance at the box office. Clint Morris describes the movie as: “A grand epic adventure that’ll stand as a highpoint in the producing career of Moustapha Akkad.”[4]

In the United Kingdom Al Akkad once tried to buy Pinewood Studios from the Rank Organisation and also had a studio at Twickenham. At the time of his death, he was in the process of producing an $80 million movie featuring Sean Connery about Saladin and the Crusades, for which he already had the script, that would be filmed in Jordan. Speaking of the film, he said:

…Saladin exactly portrays Islam. Right now, Islam is portrayed as a terrorist religion. Because a few terrorists are Muslims, the whole religion has that image. If there ever was a religious war full of terror, it was the Crusades. But you can’t blame Christianity because a few adventurers did this. That’s my message.[5]

Al Akkad and his 34-year-old daughter, Rima Akkad Monla, were killed in the November 9, 2005 Amman bombings in Amman, Jordan.[3] They were both in the lobby at the Grand Hyatt when a bomb exploded; his daughter died instantly, and Akkad died of his injuries two days later in a hospital. Moustapha Al Akkad is survived by his former wife, Patricia Al Akkad and their sons, Taric and Malek who helped produce most of the Halloween movies, as well as his widow, Suha Ascha Akkad, and their son Zaid.