WASHINGTON (RNS) — When white supremacist groups announced plans to hold a demonstration in the nation’s capital to mark the one-year anniversary of the “Unite the Right” rally in Charlottesville, Va., many were concerned the day would descend into violence as it did in 2017, when one woman was killed and many more injured after a man who had marched with racists allegedly plowed his car into a group of counter-protesters.

But by Sunday evening (Aug. 12), Washington had hosted far more anti-racist Methodists, Baptists and other religious demonstrators than white supremacists, and the thousands of other counter-protesters spread across the city suggested white nationalists had inadvertently done more to unite people across religious and racial differences than bolster the ranks of racists. 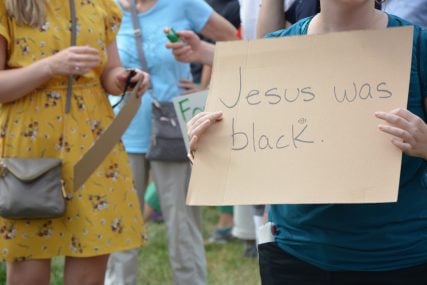 Some religious groups have been actively fighting against racism throughout America’s history, and a band of faith leaders and theologians were among the few who stared down white supremacists in Charlottesville last year. But a broad swath of religious groups began organizing ahead of this year’s rally in Washington, hosting vigils, trainings and events. Auburn Seminary, the Council on American-Islamic Relations) and Bishop Michael Francis Burbidge of the Roman Catholic Diocese of Arlington, Va., also issued statements condemning racism, the planned white supremacist rally or both.