Man Behind Deadly Paris Attack Was on Radicalism Database

(PARIS) — Investigators working to understand why a 20-year-old French citizen born in the Russian republic of Chechnya went on a stabbing rampage in central Paris detained the dead suspect’s parents and a friend Sunday, French officials said.

Counterterrorism investigators want to know if the assailant, identified by Chechnya’s leader as Khamzat Azimov, had help or co-conspirators. The attacker killed a 29-year-old man and wounded four other people with a knife before police fatally shot him Saturday night. 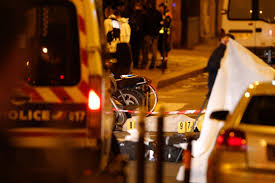 The suspect was on a police watchlist for radicalism, a judicial official not authorized to speak publicly about the case told The Associated Press. But he had a clean criminal record and did not know his victims, Interior Ministry spokesman Frederic de Lanouvelle said.

The parents were detained in Paris’ northern 18th district and the friend was detained in the eastern French city of Strasbourg on Sunday afternoon, the judicial official said.