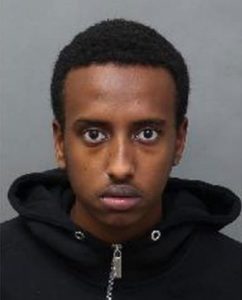 TORONTO — A 20-year-old Brampton man is facing dozens of charges, including seven counts of attempted murder, in what police describe as a string of unprovoked, random shootings in Toronto that narrowly missed being fatal.

Toronto Police said Tuesday that the man, who is currently in custody, allegedly worked his way through neighbourhoods in the northwest corner of the city over the past two weeks, opening fire on a total of seven victims ranging in age from four to 47.

None of the victims were known to each other or the accused, said Supt. Ron Taverner, describing the case as “disturbing” but saying the force is breathing a sigh of relief that things didn’t turn out worse.

“We’re lucky that we’re not dealing with potentially seven homicides or more,” Taverner said in a telephone interview. “I wish we could say we had a motive, but we don’t.”

Toronto Police released this image of a gun seized in the arrest of Adam Abdi, who is accused in five shootings and seven attempted murders.

Taverner said the string of shootings began on Jan. 9 as two teenagers were entering a residential building.

Taverner alleged that the accused, 20-year-old Adam Abdi , fired multiple shots at the 19-year-old man and 15-year-old girl as they stood in the hallway. The girl was not hurt, while the man sustained undisclosed injuries, he said.

One week later on Jan. 16, Taverner alleged Abdi struck again as a 47-year-old man was standing on the sidewalk outside his home. Police allege Abdi walked up and shot him before fleeing the scene.

The next shooting took place five days later as a 20-year-old man was walking past a vehicle in which Abdi was allegedly seated. Police said he came out of the car shooting at the alleged victim before driving away from the scene.

The following day, Taverner said a 35-year-old man and his four-year-old daughter were sitting in their vehicle after dropping someone off when the next alleged attack came.

Taverner alleged Abdi exited a nearby vehicle and fired multiple close-range shots at the father and daughter before fleeing. Neither the father nor daughter were hurt.

One hour later, however, a 19-year-old man was less fortunate, police said. Taverner alleged Abdi drove up beside the teen as he walked down the street, rolled down the window and opened fire. The 19-year-old suffered life-threatening injuries and remains in hospital, Taverner said.

“It’s mind-boggling, quite frankly,” Taverner said. “We haven’t been able to determine any motive whatsoever that these are other than random shootings.”…