“Islam has solutions to all problems of the present day,” said Imam Shamshad 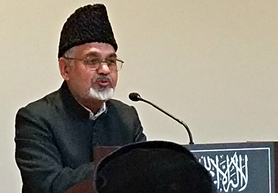 The presenters focused on current day issues including modesty, women rights, extremism, lack of justice and host of other contemporary problems facing the youth and the American public in general.

Dr Mansoor Qureshi, Presedent of the community welcomed the guests and urge all to listen today’s program and make it part of once life, Hasan Qureshi a youth, described the challenges the youth face in todays environment where sexual abuse and harassment has become prevalent. Its hard for the youth to find a true role model one can trust in such an environment. The only way to fashion one’s life with purpose would be to follow the excellent model of the Holy Prophet, he elaborated.

Muhammad Ahmad, director outreach looked at numerous examples of how the opponents of the Prophet Muhammad (pbuh) during his lifetime viewed his character and claim of being the messenger of God. In addition, he presented numerous examples from the writings of recent historians and scholars and their view of the character and accomplishments.

Muhammad quoted from Michael Hart’s famous book The 100. “My choice of Muhammad to lead the list of the world’s most influential persons may surprise some readers and may be questioned by others, but he was the only man in history who was supremely successful on both the religious and secular levels.”

Imam Shamshad Nasir, regional Imam Mid-West region in his concluding keynote address provided practical examples from the life of the Prophet Muhammad (pbuh) that everyone not only can easily implement in their daily lives but can reap the benefits immediately. “From simple and basic matters of health and personal hygiene to larger issues of justice, forgiveness, forbearance and respect and everything in between we can look up to Prophet Muhammad (pbuh) as our role model” said the Imam. 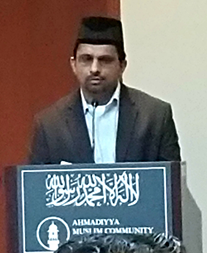 Holy prophet taught us that one should eat less and not completely fill the stomach with food. Leaving some empty stomach keeps us from many health-related issues. Also, Holy Prophet always ate with his right hand and even distribute and share the food by starting from his right side despite the fact that his most senior companions would be sitting on his left side and a child on his right side. He would always start the food from the person on his right-hand side.

Imam shamshad mentioned that Islam is the only solution of present day all problems and said: If we adopt Justice in all our affairs peace will be achieved.

Imam Shamshad also elaborated on many other aspects of the Holy Prophet’s life and how everyone can benefit from them by implementing in our lives.

At the end Imam Shamshad Nasir and Dr Qureshi took questions from the audience.

One of the guest asked questions in regard to the status and meaning of Sharia.

“Holy Quran is the Sharia for Muslims and there is no place in the holy Quran where any violence is permitted or permission to take anyone’s life is given. The only time one is allowed to defend oneself when he/she is being attacked and is in danger of his or her life”

Imam Shamshad Nasir thanked the attendees for their time and listening to the program and concluded the program with silent prayers.