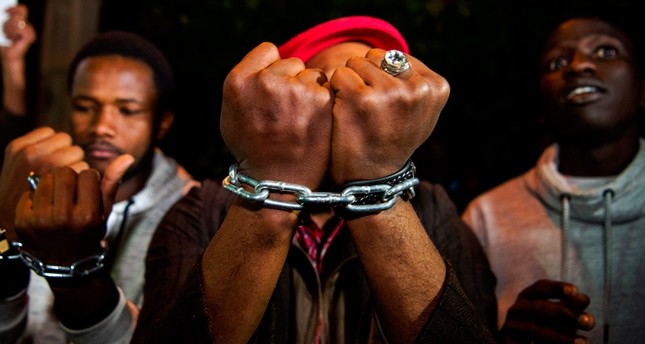 The revelation that migrants are being sold as slaves in Libya is not an isolated case: more than 40 million people were estimated to be victims of modern slavery in 2016.

Here are some of their key findings:

Around a quarter of the nearly 25 million people in forced labour are in private households but they can also be found in factories, on construction sites, on farms and fishing boats.

The study gives the example of 600 fishermen held on boats in Indonesian waters for many years.

More than half of the slaves are in debt to whomever is holding them. Others cannot escape because they have been drugged, paid too little to be able to leave, physically abused or simply because they are too far from home to make the return journey.

Nearly five million among them are forced into prostitution, the report said. Just over four million are victims of work imposed by state authorities such as forced labour in prison or abuse of army conscripts.

Women and girls account for 71 percent of the slaves, or nearly 29 million people.

One in four victims of modern slavery is a child — around 10 million.

Around 15.4 million people are married against their will, of whom more than a third are below 18 years of age. Practically all are female.

Women account for 99 percent of victims of forced labour via prostitution.

However in terms of absolute numbers, 62 per cent of all victims are in the Asia and Pacific region where the prevalence of forced labour is highest, involving four out of every 1,000 victims.

Several studies have established the link between migration and human trafficking, especially on routes taken by the migrants, the report said.

Three-quarters of migrants questioned in 2017 on the route from Libya to Europe by the International Organization for Migration said they had been victims of human trafficking abuses.

“Irregular migrants, for instance, may be subjected to kidnap and ransom demands, extortion, physical violence, sexual abuse, and trafficking in persons.

“They may start their journeys by willingly placing themselves in the hands of smugglers and become trafficked along the way,” the report said.