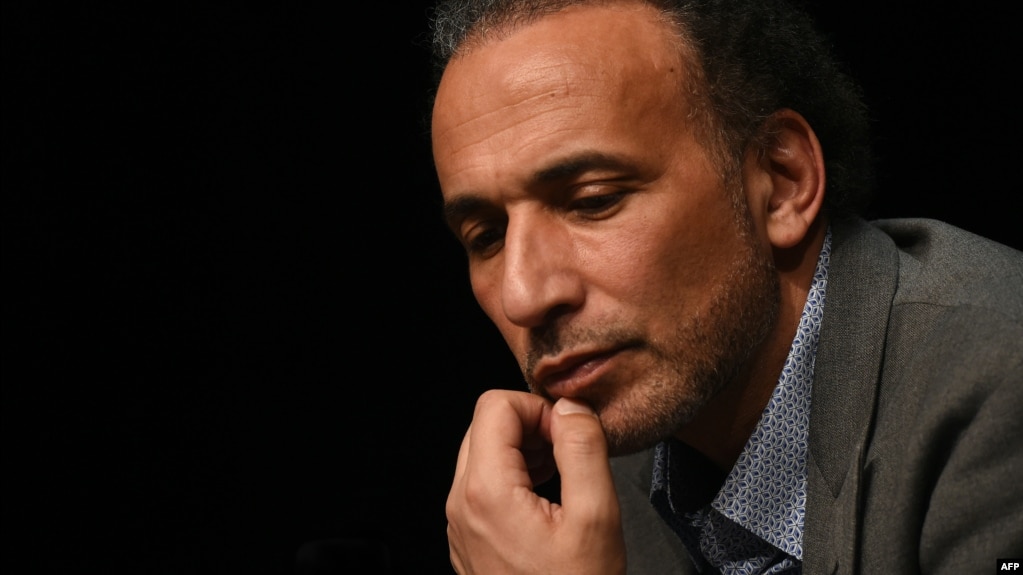 FILE – This file photo taken on March 26, 2016 shows Swiss Islamologist Tariq Ramadan taking part in a conference on the theme “Live together” in Bordeaux.

PARIS — Sexual assault charges targeting a prominent Islamic scholar have left many European Muslims stunned, and triggered sharply disparate reactions within the multi-faceted community, even as many fear a broader backlash.

Swiss-born theologian Tariq Ramadan took a leave of absence from teaching at Oxford University last week, following complaints of rape and assault filed by two French women and reports of similar charges in Switzerland. A statement by the university said the decision was mutual. Ramadan denies the accusations.

While some analysts say Ramadan’s star has been waning in recent years, the impact of the accusations has been immense. Especially in French-speaking countries, 55-year-old Ramadan inspired a generation of young Muslims to believe Islam and citizenship were compatible in a distinctly secular Europe. Unlike many religious clerics here, he spoke in French rather than Arabic during meetings and symposiums that were usually packed. 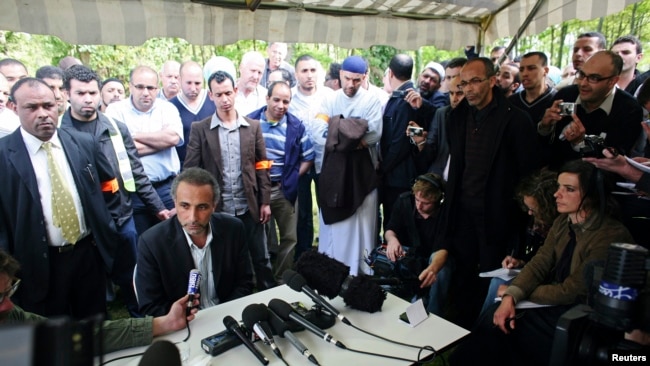 FILE – Tariq Ramadan talks to the media after a conference at the Er-Rahma mosque in Nantes, western France, Apr. 25, 2010.

“I think this affair is going to lead to big changes,” said Alexandre Piettre, a specialist in Islam at the Ecole Pratique des Hautes Etudes, in Paris. “He had a discourse of integration, and without it, it leaves space for political radicalism that was contained by it; those who reject public participation in the West and call for a return to Muslim countries — the Hijra — or even armed jihad.”

The grandson of Egypt’s Muslim Brotherhood founder Hassan el-Banna, Ramadan has long been a polarizing figure. Critics claim he wielded a “double discourse,” hiding political Islam behind unifying rhetoric. He was temporarily banned from the U.S. under the Bush administration, a measure lifted under the Obama one.

Much of the debate surrounding him has taken place in France, where an estimated five million Muslims make up Western Europe’s biggest Islamic community. 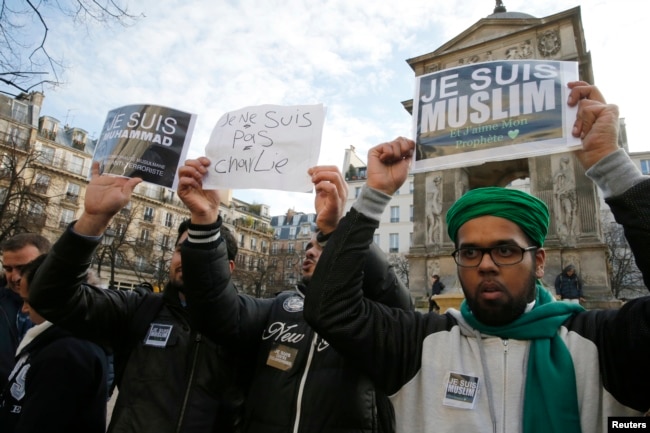 FILE – French Muslim youths hold placards which read, “I am Muslim. I love my Prophet” (R) and “I am Muhammad. I belong to the Muslim community and I am anti-terrorist” during a demonstration in central Paris, Jan. 18, 2015.

The preacher also sparked outrage in 2002, by publishing an article in France’s Le Monde newspaper that supported stoning adulterers — a position condemned by his brother Tariq. 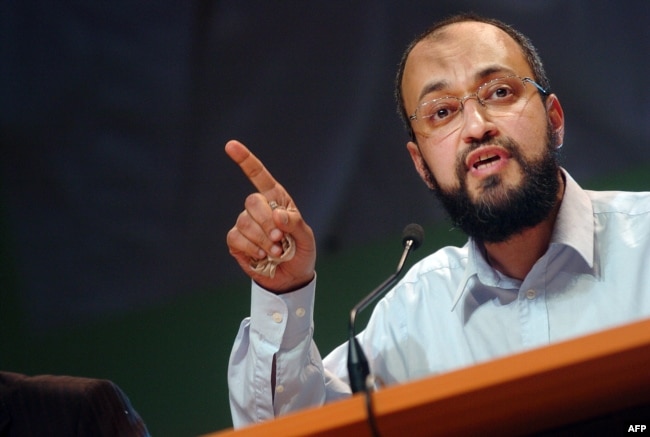 FILE – Hani Ramadan delivers a speech during the annual meeting of muslims in France, 14 Apr. 2007 in Le Bourget, north of Paris.

The assault charges come amid a broader global outcry against sexual harassment, triggered by the Harvey Weinstein scandal that began in the United States. As the charges mounted last month, French activist and former Salafist Henda Ayari filed a police complaint accusing Ramadan of brutally raping her in a hotel room in 2012. Since then, another French woman has come forward with a similar story, according to media reports. French prosecutors are probing the accusations.

In neighboring Switzerland, a Geneva newspaper reported four young women said they had sexual relations with Ramadan as minors when he was teaching at their school — at least three of the incidents were said to be non-consensual. Media reported another rape claim in Belgium.

Meanwhile, Oxford University graduate Aymenn Jawad al-Tamimi posted a blog that gave voice to an American Muslim friend, who recounted an unwanted sexual advance by Ramadan in 2013. The account echoed a pattern described by the two French women: an initial interaction with Ramadan on social media to discuss religious matters, then an eventual meeting in a hotel room because Ramadan said he did not wish to be seen in public.

“For me it’s not about his political views,” said al-Tamimi, who works for a think tank opposed to Ramadan, but says he is not part of that debate.

“I don’t find him particularly insightful or been blown away by anything he’s said,” said al-Tamimi in a telephone interview, adding he had seen Ramadan speak at Oxford only once. “For me it’s about people using their celebrity status to engage in sexual misconduct.”

Ramadan has categorically denied the accusations, and filed for slander.

In a Facebook posting Saturday, he said he remained calm and had “confidence in justice.” For years, he has called for moderation, dialogue and openness, he wrote, and “these are the values we need most today.”

But these are not the reactions swirling in social media and in the press.

Charlie Hebdo, the French satirical newspaper that was targeted in a 2015 terrorist attack, has received death threats over an explicit front-page cartoon of Ramadan. Meanwhile, former prime minister Manuel Valls condemned the scholar on Twitter, saying he had “denounced the duplicity of Tariq Ramadan” for years.

Yet others suggest the allegations against Ramadan are a Zionist or Jewish plot or the manifestation of simmering racism, while a group of Muslim feminists sided with Ramadan’s alleged victims, in a statement published in Le Monde.

“There is no ‘Muslim exception’ when it comes to sexual abuse,” researcher Fatima Khemilat wrote.

These reactions, along with yet another — of Muslim hardliners pleased by Ramadan’s predicament — “are sketching the lines of fracture in the Muslim community that will solidify in the future,” analyst Piettre predicted. “With, in the middle, all those who are distraught at what happened to Tariq Ramadan. Who believe it’s not possible, who are orphans.”

Bordeaux imam, Tareq Oubrou, declined an interview request citing the ongoing investigation. “The affair is of enormous gravity for the person concerned and notably for what he incarnates,” he said in a text message.

But M’hammed Henniche of UAM 93, an alliance of French Muslims in the Seine-Saint-Denis region outside Paris, said the allegations against Ramadan would harden anti-Muslim sentiment.

“Everyone who is against Tariq Ramadan will say this is proof that Islam is not a religion of peace, that it’s a barbaric religion that treats women as objects,” he said.

For his part Abdallah Zekri, a senior member of the mainstream umbrella group, the French Council for the Muslim Faith, is underwhelmed by Ramadan, but criticizes the virulent reaction.

“Tariq Ramadan is a big personality because the media made him one,” he said. “He’s never been my cup of tea. But he has not been judged or condemned, and I respect the presumption of innocence.”