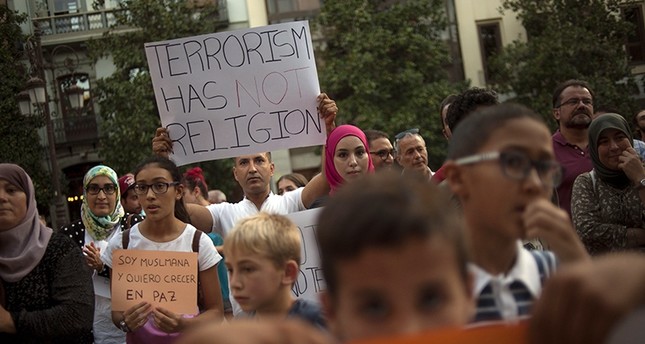 Muslims attend a demonstration in Granada on August 23, 2017 in protest against a surge in anti-Islamic hate crimes following last week’s deadly attacks in Barcelona and Cambrils (AFP Photo)

Tens of thousands of Spaniards and foreigners are to stage a defiant march against terror through Barcelona on Saturday following last week’s deadly vehicle rampages.

The Mediterranean city is in mourning after a van ploughed into crowds on Las Ramblas boulevard on Aug. 17, followed hours later by a car attack in the seaside town of Cambrils.

Fifteen were killed in the carnage and Spanish Prime Minister Mariano Rajoy has called on Spaniards to turn out in force to show their “love” and solidarity with Catalonia where the rampages took place.

King Felipe VI will also attend the march, becoming the first Spanish sovereign to take part in a demonstration since the monarchy was re-established in 1975 after the death of dictator Francisco Franco.

Europe has been shaken by a spate of deadly Daesh terrorist violence with an increasing number of low-tech attacks using vehicles as weapons or knives.

On Friday evening, a man was shot dead in central Brussels after stabbing a soldier and shortly afterward another man with a large knife attacked police in London as they tried to arrest him outside Buckingham Palace.

The Spanish premier said Friday the king would be attending the march to demonstrate “his love for the people of Barcelona, of Cambrils, of Catalonia.”

“There, with all of Catalan society and all of Spain… we will once again give a clear message of unity and condemnation of terrorism, and of love for the city of Barcelona,” he added.

The warm comments contrast with Rajoy’s earlier criticism of Catalan leaders, with whom he has been at loggerheads over their plans to hold an independence referendum on Oct. 1.

But in the aftermath of the attacks which were claimed by the Daesh terrorist group, he and Catalonia’s separatist president Carles Puigdemont made a show of unity and both will attend the march which begins at 6 p.m. (1600 GMT).

Already on Friday evening, thousands of people marched against terror in Cambrils, shouting “no tinc por,” which means “not afraid” in Catalan — as defiantly shouted by locals last week after the attacks.

The slogan of the Barcelona demonstration will also be “no tinc por.”

Those who tended to the victims last week will be given pride of place at the top of the procession.

These include security forces, emergency workers, residents and shop owners in the Las Ramblas avenue and taxis who took people for free.

People like Montse Rovira, the city hall’s head of social emergencies who helped people who were lost or who couldn’t find their loved ones.

Over the following days, she and her colleagues gave families psychological support when they were given terrible news, and also helped others like doctors and firefighters.

“There are a lot of people who are suffering,” she said, adding that even psychologists themselves had struggled.

For her, the march will help “recognize the work of people who have been on the front line.”

Saray Gomez, an 18-year-old who works at a flower stall right next to where the van ended its murderous rampage, said it was important “to give a message of unity and peace.”

“And it’s important to distinguish between Islam and terrorists, because Muslims are the first to be affected.”

Thousands of red, yellow and white flowers — the colors of Barcelona — will be distributed to protesters.

The march will end at Plaza de Catalunya near Las Ramblas where two cellists will play “Cant dels ocells” (Song of the birds), a traditional Catalan melody which has become a symbol of peace.

In 1961, late composer Pau Casals had played it at the White House in a rejection of the Franco regime.