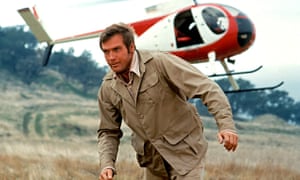 Lee Majors as Colonel Steve Austin in the 1970s TV series The Six Million Dollar Man: ‘Over 40 years later the projected technology has been transformed. Nevertheless, the basic idea is pretty much the same.’ Photograph: Everett Collection/Rex Features

Writing in the fourth century, the theologian Athanasius explained the incarnation thus: “He became human so that we might become divine.” In other words, God’s purpose is to make us like him, to shape us into mini gods. Called divinisation, and still popular with the Orthodox church and also with Mormons, this theology was not the direction the mainstream western church would take. It offended too much against monotheism, the basic source code of the Abrahamic religions. But according to Israeli historian Yuval Noah Harari, divinisation is precisely the direction in which we are now heading – not through the work of the divine, but because of technology. Thus the title of his new book, Homo Deus: A brief history of tomorrow. Technology, argues Harari, is going to transform some of us into gods: powerful, super-intelligent, ageless. The product of evolution, yes – but not through natural selection but through our own super-fast intelligent design.

My own idea of human advancement hasn’t changed much since 1973 when Colonel Steve Austin had a bit of trouble on a runway in The Six Million Dollar Man. “Man barely alive. We can rebuild him. We have the technology.” Over 40 years later, the projected technology has been transformed, and you wouldn’t get a decent Premier League footballer for $6m, let alone a new sort of human being. Nonetheless, the basic idea is pretty much the same. Take human powers and enhance them. Take human intelligence and multiply it. These gods are like human beings, except more so.

The transhumanist step-change is to think beyond the “limitations” of our organic frame. The transhumanist, like the ancient gnostics, imagines that our bodily reality holds us back, rather than making us who we are. What is valuable about being a human being will become uploadable into the digital cloud. Only then, they say, we will truly have become gods. Beyond sex and food, we’d become a string of ones and zeros. This is the reductio ad absurdum of the belief that freedom means the eradication of constraint.

In contrast, what is classy about Harari’s futurology is that it is not suckered by the cheap and vertiginous excitement that such fantasies can generate. For, as advances in robotics and information technology come to push ordinary human beings out of a job, Harari imagines the working class of the future being replaced by a useless class, a group with no function economically, no jobs to do and no reason to get out of bed.

The life of a homo deus will not be nasty, brutish and short, but painless, purposeless and long. In such a future, one can imagine that most deaths will take place though suicide. “Is there anything more dangerous than dissatisfied and irresponsible gods who don’t know what they want?” writes Harari.

Unlike geek mythology, Greek mythology is full of stories of the rejection of divinity, of gods preferring human beings to their own kind. The beautiful goddess Calypso offers the glamorously heroic and emphatically homo sapiens Odysseus an eternal life of sun, sea and sex on her idyllic island. And yet he rejects her offer, preferring his mortal love Penelope and a risky life of seafaring adventure. And that, of course, is precisely why he is glamorously heroic. Without the possibility of death he would be nothing. The life of a homo deus is not all it’s cracked up to be.

What’s interesting about the idea of a god/man is that it’s precisely the thing that philosophically minded Christians argued most about in the first few centuries of its existence: how could this man Jesus also be God? They imagined God becoming human, becoming physical, not the other way round. And far from seeking release from what makes us human, they believed that to imagine a perfect homo deus was also to imagine God as human enough to die painfully. Which is why the Christian homo deus feels far more compatible with basic humanism than the post-human homo deus of robots and technology.