Britain’s largest Islamic convention will see over 40,000 Muslims from more than 100 countries come together to support and pray for peace in the leafy English countryside. Politicians, Ministers and multi-faith speakers from around the world will also be in attendance. Millions of others will watch the live broadcast via satellite and internet streaming.

This year is the 50th anniversary of the annual Jalsa Salana convention, The event will run from Friday, August 12th to Sunday, August 14th at the 200-acre Oakland farm which has been owned by the Ahmadiyya Muslim Community since 2008. Teams of volunteers built a mini-city from scratch in two to three weeks leading up to the convention and will dismantle it in the week afterwards. 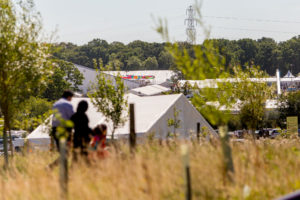 The convention features a tent city overlooking the green farmlands, a bustling bazaar, a dining area, a mini-hospital and flags of the constituent countries. The convention will focus on combating extremism through faith and fraternity. It also aims to promote “spiritual uplifting” among members of the Ahmadiyya Muslim Community.

Food for the soul goes hand in hand with food for the body; feeding the 40,000 convention attendees is a huge task that requires a stand alone “Roti Plant“, which produces over 150,000 pieces of bread a day, Gigantic machines mix the dough, then feeds the dough circles into a machine which in turn flattens them and feeds them into the hot oven. The fresh bread comes out on the other end where volunteers bag them up and transport them to the dining area ready for consumption.

Talking to media, one of the volunteers Javed Uddin said he had been volunteering in the Jalsa kitchens for more than a… continue reading at rabwah.net