The most troubling thing about Pauline Hanson’s view of Muslims? The facts no longer matter 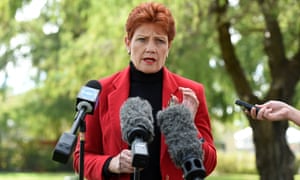 ‘The core of bigotry is not rational. What this debate shows us is that some people are proudly, adamantly not interested in facts.’ Picture – Pauline Hanson fronts the media Photograph: Dan Peled/AAP

The most troubling aspect of the current debate about Muslims in Australia is that facts are irrelevant.

So despite the fact that Australian Muslim leaders and spokespeople have publicly condemned terrorism and Islamic State again and again and again andagain, Pauline Hanson can announce on Q&A that the “Grand Mufti won’t even come out and condemn the terrorist attacks that happened overseas”, and a Glen Iris mother can call ABC Melbourne local radio and say that Muslims need to start condemning terrorism.

These comments have become so commonplace, they’re almost unremarkable.

In fact, Muslims have condemned terrorism and Isis in numerous media reportsacross the country, and even in media around the world.

In fact, contrary to what is alleged, Muslims have led protests against Isis, Australian imams have issued refutations of terrorism, suicide bombing and fighting in foreign conflict, and a cohort of some of the world’s most esteemed Muslim scholars have issued a point-by-point classical, scholarly refutation of Isisand made it available in 10 languages. 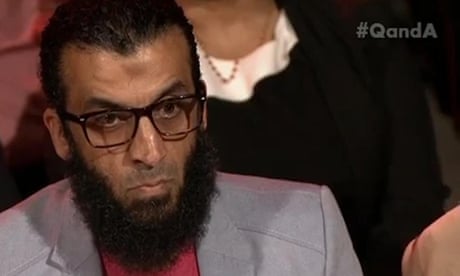 ‘I’m proud of you’: son’s praise after father took on Pauline Hanson on Q&A

In fact, Muslims have done and continue to do grassroots work within their own community to counter violent extremism and build community cohesion, and they have reported their fellow Muslims to security agencies on numerous occasions when they feared they were a risk to community safety.

In fact, Muslims are some of the largest victims of Isis, in terror attacks like those recently in Baghdad and Medina, and within the Isis-controlled area itself. Isis regularly publishes a hit-list of global Muslim leaders in its online magazine, which certainly helps to explain why Muslims from Syria and Iraq may want to migrate to countries like Australia. These are the people Pauline Hanson and Sonia Kruger want to ban.

And, in fact, in the recent horrific Nice attacks, many of the 84 people killed were Muslim.

This is the most worrisome aspect of a conversation that is always framed in the shielding rhetoric of free speech – the facts make literally no difference.

The core of bigotry is not rational. What this debate shows us is that some people are proudly, adamantly not interested in facts. They don’t even need to try to be. They can talk about fears and feelings, and place no demands on themselves to see if those emotions are reasonable.

This might be unremarkable if the fear was about spiders or heights, but when it is about immigration policy, or the strategies of elected politicians, or directly impacts the citizens (who already report abuse and attack on the streets) of a society, disregarding facts is not just foolish and selfish, it’s downright dangerous. 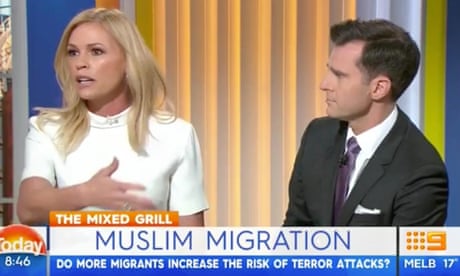 Muslims in Australia have been pushed into a corner. In a wilful rejection of both facts and fairness, Muslims are screamed at for not doing enough, not saying enough, not being enough, and yet when we do, say, and be exactly what is ordered of us, our accusers stick their fingers in their ears and shout “La la la, I can’t hear you over my shouting accusations that you never condemn terrorism or accept the Australian way of life”.

Especially troubling is the grotesque implications buried within the constant demands for condemnations from Muslims – that unless we publicly come out after each and every event perpetrated by a Muslim unknown to us and already condemned by our faith, the default assumption about us is that we must endorse it. That any silence from us necessarily denotes support and agreement. That the previous 10 times we came out and said murder is wrong, terrorism is an abomination, harming innocents is against our religion, was seen as the exception to our otherwise evil standard. That when we act like full human beings, it is an aberration.

Consider how dehumanising it is to know that with every demand for a fresh condemnation, people are implicitly ascribing to you truly monstrous beliefs as your norm.

That has been my exhausted realisation in these last few years: what Muslims do or say does not change anything. And this is not just a terrifying realisation, but a blinding indictment, as it shows just how insidious the demands on Muslims to alleviate the bigotry of others is.

Because when a group can hold fast to prejudiced ideas in spite of factual evidence to the contrary, while at the same time demanding responses from Muslims which they have shown repeatedly they will ignore, that group has not only offloaded any sense of responsibility for addressing their own bigotry, but have created a water-tight echo chamber for the views they will trumpet from the biggest platforms in the land.

This is why Pauline Hanson has likened Muslims to pit bulls, arguing “We have to take a strong stance against Muslims, strong stance against Islam and its teachings and its beliefs. We have laws here that we don’t bring in pit bull terriers because they’re a danger to our society … we have laws in place to protect Australians … Pressure the government to say no more Muslims in Australia, no more Muslim refugees in Australia.”

And it’s why banning Muslim immigration makes sense to people like Sonia Kruger; there is simply no Muslim that can be trusted, irrespective of however many peaceful Muslim “friends” one may have. Every single Muslim, by virtue of our Muslim-ness, is suspicious. And nothing we do will change that opinion. You have shown us that.

The Pauline Hanson resurgence: as a Muslim, I’m surprised it took so long

It is horrifying to realise that nothing we do – short of denouncing our religion entirely – can change the unfair beliefs people have about the group to which you belong, at a time when the stakes have never been higher.

Nearly the same number of people voted for One Nation in the Senate as there are Muslims in this country – more than 500,000 to 476,300 – suggesting the debate will only get more impassioned over the coming years. Already there are letters to the editor of the Australianrecommending internment of Muslims.

Surely the least we can demand is a fair and factual debate, to remind people like me that this is still a conversation worth having.