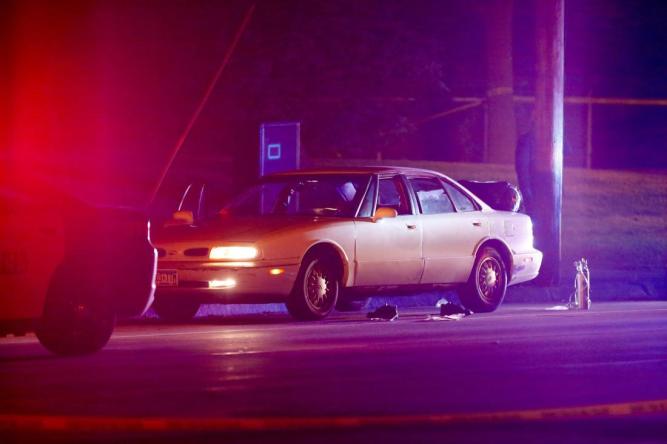 A car at the scene of a shooting of a man involving a St. Anthony Park Police officer Wednesday, July 6, 2016, in Falcon Heights, Minn. Police in Minnesota say a man has been taken to a hospital in unknown condition after being shot by an officer while inside a car with a woman and a child. St. Anthony Police interim police chief Jon Mangseth told reporters at a news conference that the incident began when an officer from his agency initiated a traffic stop around 9 p.m. Wednesday in Falcon Heights, a St. Paul suburb. (Leila Navidi/Star Tribune via AP)

FALCON HEIGHTS, Minn. — A Minnesota officer fatally shot a man in a car with a woman and a child, an official said, and authorities are looking into whether the aftermath was livestreamed in a widely sharedFacebook video, which shows a woman in a vehicle with a man whose shirt appears to be soaked in blood telling the camera “police just shot my boyfriend for no apparent reason.”

St. Anthony Police interim police chief Jon Mangseth said the incident began when an officer pulled over a vehicle around 9 p.m. Wednesday in Falcon Heights, a St. Paul suburb that Mangseth’s department serves. Mangseth said he did not have details about the reason for the traffic stop, but that at some point shots were fired. The man was struck but no one else was injured, he said.

As word of the shooting and video spread, relatives of the man joined scores of people who gathered at the scene of the shooting and outside the hospital where the man died and identified him as Philando Castile of St. Paul, a 32-year-old cafeteria supervisor at a Montessori school.