Paul Ryan: There Will Be No Religious Test For Syrian Refugees 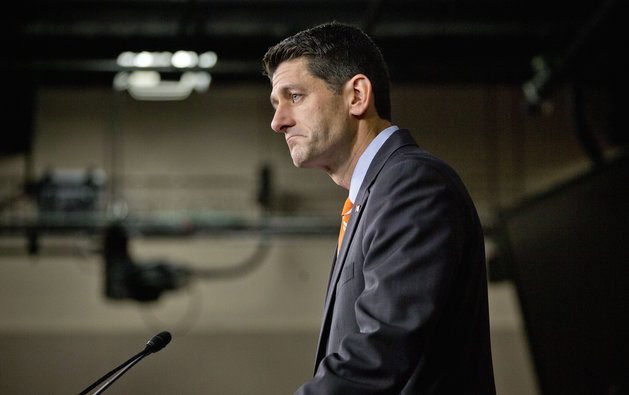 House Speaker Paul Ryan of Wis. listens during his news conference on Capitol Hill in Washington, Thursday, Nov. 5, 2015. The House has voted to continue transportation programs for six years with no significant increase in spending. Thats despite warnings that the nations roads, bridges and transit systems are falling apart. (AP Photo/Pablo Martinez Monsivais)

WASHINGTON — Legislation to restrict the flow of Syrian refugees into the United States will not include a religious test, House Speaker Paul Ryan (R-Wis.) said on Wednesday.

After the Friday terrorist attacks in Paris, which left 129 people dead, someRepublicans have called for the U.S. to accept only Christian refugees fleeing Syria, not Muslims. The Islamic State took credit for the assault, and a Syrian passport was also found near the body of one of the suicide bombers.

In response, the House will take up legislation this week that will effectively “pause” the Syrian refugee program. But “I will also point out that we will not have a religious test, only a security test,” Ryan said of the bill in one of his first speeches as speaker on the House floor.

The plan introduced by Republicans would mandate that officials at the FBI, the Department of Homeland Security and the director of National Intelligence certify to Congress that each Syrian or Iraqi refugee admitted is not a threat to security. The bill also stipulates that the FBI would need to certify that each refugee admitted received a background check and was determined to not be a threat. Finally, the bill would require monthly reports on refugee certifications to Congress from the DHS inspector general.

“People understand the plight of those fleeing the Middle East,” Ryan said. “But they also want basic assurances for the safety of this country.”

“It would mean a pause in the program until we can be certain beyond any doubt that those coming here are not a threat,” he continued. “And I don’t think it’s asking too much.”

Despite increased scrutiny from members of Congress, the administration has stuck by its plan to admit 10,000 Syrian refugees this fiscal year.

While in Manila on Tuesday, President Barack Obama scolded the GOP for its anti-refugee rhetoric, calling the idea of only allowing Christian refugees into the U.S. “offensive.”

The White House has tried to reassure lawmakers and governors in recent days that its screening process for refugees is rigorous and extensive.