Bonsai (盆栽?, lit. plantings in tray, from bon, a tray or low-sided pot and sai, a planting or plantings,

pronunciation (help·info))[1] is a Japanese art form using miniature trees grown in containers. Similar practices exist in other cultures, including the Chinese tradition of penjing from which the art originated, and the miniature living landscapes of Vietnamese hòn non bộ. The Japanese tradition dates back over a thousand years, and has its own aesthetics and terminology.

“Bonsai” is a Japanese pronunciation of the earlier Chinese term penzai. A “bon” is a tray-like pot typically used in bonsai culture.[2] The word bonsai is often used in English as an umbrella term for all miniature trees in containers or pots. This article focuses on bonsai as defined in the Japanese tradition.

The purposes of bonsai are primarily contemplation (for the viewer) and the pleasant exercise of effort and ingenuity (for the grower).[3] By contrast with other plant cultivation practices, bonsai is not intended for production of food or for medicine. Instead, bonsai practice focuses on long-term cultivation and shaping of one or more small trees growing in a container.

A bonsai is created beginning with a specimen of source material. This may be a cutting, seedling, or small tree of a species suitable for bonsai development. Bonsai can be created from nearly any perennial woody-stemmed tree or shrub species[4] that produces true branches and can be cultivated to remain small through pot confinement with crown and root pruning. Some species are popular as bonsai material because they have characteristics, such as small leaves or needles, that make them appropriate for the compact visual scope of bonsai.

The source specimen is shaped to be relatively small and to meet the aesthetic standards of bonsai. When the candidate bonsai nears its planned final size it is planted in a display pot, usually one designed for bonsai display in one of a few accepted shapes and proportions. From that point forward, its growth is restricted by the pot environment. Throughout the year, the bonsai is shaped to limit growth, redistribute foliar vigor to areas requiring further development, and meet the artist’s detailed design.

The practice of bonsai is sometimes confused with dwarfing, but dwarfing generally refers to research, discovery, or creation of plant cultivars that are permanent, genetic miniatures of existing species. Bonsai does not require genetically dwarfed trees, but rather depends on growing small trees from regular stock and seeds. Bonsai uses cultivation techniques like pruning, root reduction, potting, defoliation, and grafting to produce small trees that mimic the shape and style of mature, full-size trees. 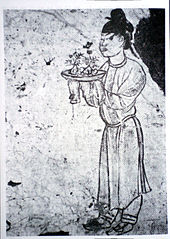 The earliest illustration of a penjing is found in the Qianling Mausoleum murals at the Tang Dynasty tomb of Crown Prince Zhanghuai, dating to 706.[5][6]

The Japanese art of bonsai originated from the Chinese practice of penjing.[7] From the 6th century onwards, Imperial embassy personnel and Buddhist students from Japan visited and returned from mainland China, bringing back souvenirs including container plantings.[8] At least 17 diplomatic missions were sent from Japan to the Tang court between the years 603 and 839.[8]

Japan’s historical Shōsōin, which houses 7th, 8th, and 9th-century artifacts including material from Japan’s Tempyō period, contains an elaborate miniature tree display dating from this time.[9] This artifact is composed of a shallow wooden tray serving as a base, carved wooden mountain models, and sand portraying a riverine sandbar. The artifact includes small tree sculptures in silver metal, which are meant to be placed in the sand to produce a table-top depiction of a treed landscape. Though this display is closer to the Japanese bonkei display than to a living bonsai, it does reflect the period’s interest in miniature landscapes.

From about the year 970 comes the first lengthy work of fiction in Japanese, Utsubo Monogatari (The Tale of the Hollow Tree), which includes this passage: “A tree that is left growing in its natural state is a crude thing. It is only when it is kept close to human beings who fashion it with loving care that its shape and style acquire the ability to move one.” The idea, therefore, was already established by this time that natural beauty becomes true beauty only when modified in accordance with a human ideal.[10]

In the medieval period, recognizable bonsai began to appear in handscroll paintings like the Ippen shonin eden (1299).[9] Saigyo Monogatari Emaki was the earliest known scroll to depict dwarfed potted trees in Japan. It dates from the year 1195, in the Kamakura period. Wooden tray and dish-like pots with dwarf landscapes on modern-looking wooden shelf/benches are shown in the 1309 Kasuga-gongen-genki scroll. These novelties show off the owner’s wealth and were probably exotics imported from China.[11]

Chinese Chan Buddhist monks also came over to teach at Japan’s monasteries, and one of the monks’ activities was to introduce political leaders of the day to the various arts of miniature landscapes as ideal accomplishments for men of taste and learning.[12][13]

The c.1300 rhymed prose essay, Bonseki no Fu (Tribute to Bonseki) written by celebrated priest and master of Chinese poetry, Kokan Shiren (1278–1346), outlined the aesthetic principles for what would be termed bonsai, bonseki and garden architecture itself. At first, the Japanese used miniaturized trees grown in containers to decorate their homes and gardens.[13][14][15]

Criticism of the interest in curiously twisted specimens of potted plants shows up in one chapter of the 243-chapter compilation Tsurezuregusa (c.1331). This work would become a sacred teaching handed down from master to student, through a limited chain of poets (some famous), until it was at last widely published in the early 17th century. Before then, the criticism had only a modest influence on dwarf potted tree culture.

In 1351, dwarf trees displayed on short poles were portrayed in the Boki Ekotoba scroll.[16] Several other scrolls and paintings also included depictions of these kinds of trees. Potted landscape arrangements made during the next hundred years or so included figurines after the Chinese fashion in order to add scale and theme. These miniatures would eventually be considered garnishes decidedly to be excluded by Japanese artists who were simplifying their creations in the spirit of Zen Buddhism.[17]