IWD 2016: how women are finding new ways to fight inequality

Marches will always have their place in the fight for equality. But increasingly women around the world are finding innovative methods of making their voices heard. On International Women’s Day, here are a few of them 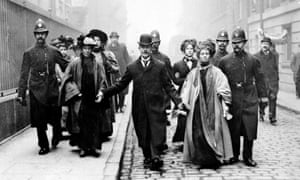 Green, white and purple sashes, powerful placards and large-scale marches – these are the hallmarks of feminist protest from days gone by. But while the suffragettes, and other activists, might have firmly etched such images on the public consciousness, a new wave of protesters are taking up the fight in inventive and surprising ways.

Marches are still important – and effective – of course, but with protests that don’t always involve rallies or banners, women around the world are also finding their own unique ways of making their point.

To celebrate International Women’s Day, here are a collection of recent and varied examples that might inspire you to take your own stand. Some are individuals, who have reported their actions to the Everyday Sexism Project. Others have hit the headlines with their unconventional and startling techniques for disrupting gendered oppression. Whether deeply personal or very public, all of them are finding new ways to stand up to inequality.

When media outlets in the Indian state of Kerala reported that 45 female employees had been strip-searched after a used sanitary towel was found in a factory toilet, feminist activists didn’t take it lying down. Campaign group Kiss of Love launched an action called Red Alert in January last year, calling on women to send sanitary towels (“used or unused”) to the marketing director of the company where the incident occurred.

“When we are walking down the street and someone harasses us in any way … we run after this person, we grab our confetti guns, we shoot once, we turn on the speakers and we sing Sexista Punk.”

Their song includes the lyrics, “What you’ve done to me is called harassment,” and explains how these women are choosing to “respond” to such provocation rather than accept it as the norm.

Young people around the world have also been finding new and attention-grabbing ways to protest against sexist school dress codes, which enforce societal gender stereotypes, and often send the message that girls’ bodies are sexual and dangerous. In the most insidious cases, girls are told the reason they asked to cover up is that they risk distracting male peers from their studies. So when girls at a middle school in Illinois were banned from wearing leggings in March 2014, they turned up to protest bearing placards that read “Are my pants lowering your test scores?”

When a transgender student in Brazil was fined because she chose to wear a skirt to school later that year, her male classmates supported her by turning up for lessons wearing skirts themselves. A photo of the students in their skirts went viral, causing the school to announce it would consider a change in uniform policy.

In Afghanistan, performance artist Kubra Khademi made a powerful statement about women’s bodies in public spaces last year when she walked through the streets wearing metal body armour specially designed to emphasise her breasts, crotch and bottom. The performance, designed to highlight the discomfort caused by men groping and harassing women in the street, drew leers, thrown stones and death threats – perfectly proving Khademi’s point.

Gender equality remains a hot topic and something that women continue to strive for at every level. Entries to the Everyday Sexism Project suggest there are also thousands of individual women finding their own, personal methods of protest. Here are just a few:

Whether it’s coordinated collective action, a personal stand or even an unplanned instance of bystander intervention, there is something each of us can do to tackle the widespread normalisation of gender inequality. You don’t even have to go looking for opportunities to take part in the movement, because – unfortunately – sexism is likely to cross everybody’s path at some point; whether it’s witnessing street harassment, overhearing workplace discrimination, or seeing the impact of gender stereotypes on a young person you know. So the next time you come across the problem, let these women be your inspiration to get stuck in and become part of the solution.