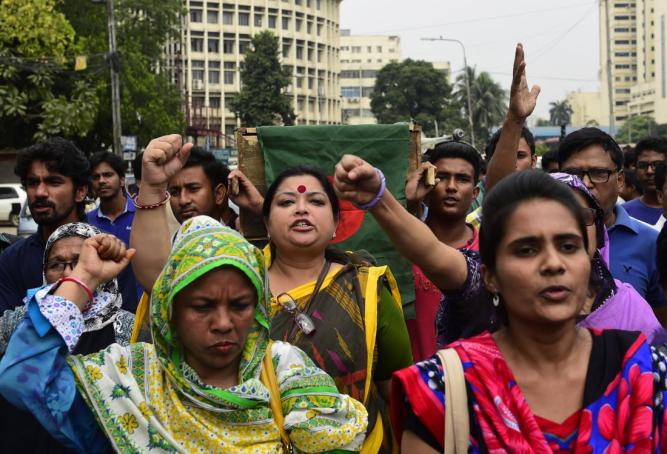 Bangladeshi activists shout slogans as they march in the street with mock coffins, that symbolize the deaths of secular publishers and bloggers, in Dhaka on November 5, 2015. Secular activists marched with mock coffins to protest the recent murder of a publisher and attempted murder of writers and bloggers that have been claimed by Islamic extremists. AFP PHOTO/ Munir uz ZAMAN (Photo credit should read MUNIR UZ ZAMAN/AFP/Getty Images)

Ahmed Rajib Haider was hacked to death in 2013

Two students in Bangladesh were sentenced to death on Thursday for killing a prominent atheist writer and blogger in the country’s capital city Dhaka in 2013.

Six others were convicted for their role in the murder of Ahmed Rajib Haider, the BBC reported.

Haider, one of several bloggers demanding the execution of Islamist leaders who committed war crimes during the 1971 conflict that led to the creation of Bangladesh, was hacked to death while returning home from a public rally two years ago.

One student attacked Haider with a meat cleaver, the court said while sentencing him to death. The other student was sentenced in absentia, while the head of Ansarullah Bangla — the group suspected of perpetrating the attack — received a five-year prison term.

The past year saw an uptick in the murders of atheist writers who spoke out against rising Islamic extremism in the South Asian nation, with five of them killed in much the same manner as Haider in 2015.