American Christians could take a lesson from Angela Merkel (COMMENTARY) 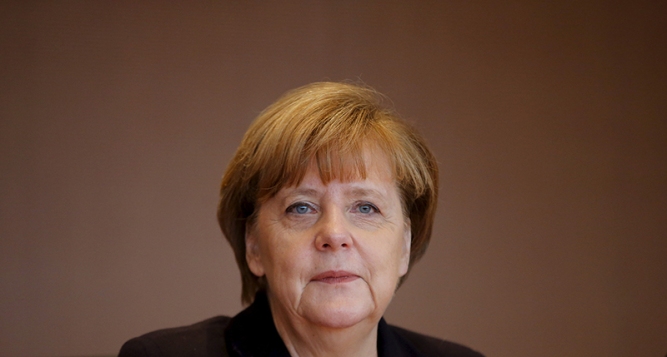 German Chancellor Angela Merkel attends the weekly cabinet meeting at the Chancellery in Berlin, Germany, on December 1, 2015. Photo courtesy of REUTERS/Fabrizio Bensch *Editors: This photo may only be republished with RNS-MERKEL-FAITH, originally transmitted on Dec. 10, 2015.

Writes about faith and public policy. From 2011 to 2015, he worked at the National Immigration Forum mobilizing Christians to advocate for the value of immigrants and immigration to America. Follow him at @guthriegf

(RNS) Time magazine’s 2015 “Person of the Year” is a self-identified conservative Christian, but not one of the many running for president of the United States. While the dynamics of faith and politics are different in Europe, German leader Angela Merkel is an example of a conservative Christian living out her faith in the public square quite differently than we see in the U.S.

Time, which calls her “Chancellor of the Free World,”  characterizes her strong leadership of economic and political crises in Europe as “no flair, no flourishes, no charisma, just a survivor’s sharp sense of power and a scientist’s devotion to data.” She may be a quantum chemist, but she’s also an Evangelical Lutheran preacher’s kid with an unwavering faith.

The chancellor has described her personal faith in several interviews. “The structure of the world relating to belief is a framework for my life that I consider very important,” she said in one. “I believe in God, and religion is also my constant companion, and has been for the whole of my life,” she told a theology student during a video interview in 2012. She kept her faith mostly quiet up until that point, which is understandable given the rising secularization of Germany.

She has held firm to her socially conservative belief that marriage is the sacred union of one man and one woman. (She has also voted against abortion rights.) But unlike conservative Christians in America, she has strongly favored anti-discrimination legislation. “Wherever we still find discrimination, we will continue to dismantle it,” she told influential YouTube star Florian Mundt.

Merkel’s faith-based leadership stands in stark contrast to her Christian conservative cousins in the United States.