Quoting one of the ‘Sayings of the Peaceful Prophet Muhammad (saw) Imam Shamshad said:

Muslim is the one from whose hand and tongue other peace loving people are saved”.

IN USA We live in a multinational and multicultural society like nowhere else. The diversity of our society is so rich that one can find some degree of representation of every race, nation, culture and religion in this country USA. Knowing this unique structure of our society it is not hard to realize how important it is that every person who is living in this country should fully understand the values of others and responsibilities of ourselves toward each individual. Because this is the only way that people of so much diversified back ground could live together with love and respect which are the two basic ingredients of creating peace in any society.

The teachers and management of West Chicago High School in west Chicago IL deserve to be fully appreciated in this regard that they realized the importance of this subject and allowed 56 students of 9th grades all between the ages of 14 to 16 belonging to different ethnic backgrounds and religions to a study tour to visit different places of worships of different religions like Mosques, Churches, Hindu Temples etc. 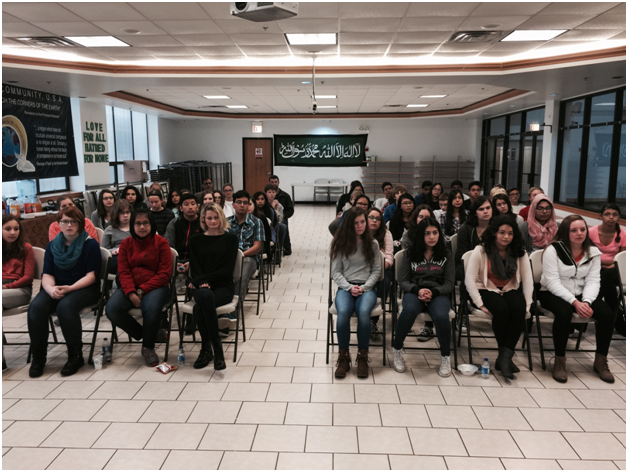 It was on Wednesday, Nov. 18th 2015 when these students visited Baitul Jamaay Mosque of the Ahamdiyya Muslim Community in Glen Ellyn Chicago.

“The oldest Muslim community in USA working for the propagation of love and peace in the entire world”.

Imam Shamshad welcomed the students and their teacher Mr. Dave Saynes warm heartedly. Before the program started all the visitors were served with the variety of refreshments.

The program started with the recitation of Holy Quran by Mirza Mashood and then Imam Shamshad started with brief introduction to the religion of Islam. He explained meaning of Islam, Muslim, and Holy Prophet Mohammad peace be on him and Holy Quran.

Imam Shamshad then described “Five pillars of Islam” in detail and that what are the duties and responsibilities of each and every Muslim in daily life. He said According to the teachings of Islam, Muslin is the one from whose hands and tongs other peace loving people are saved and who submitted totally to the will of God. For the interest of students Imam mentioned some of the teachings of Islam like
1) Worship one God
2) Importance of being kind to parents and Teachers.
3) Being good to your neighbors
4) Being kind to your wives; bringing up daughters & sisters in very kind manner.
5) Spending your wealth for poor & the needy people.

Students took special interest in it.

After providing a clear overview picture of Islam and Islamic teachings, Imam Shamshad gave introduction of the Ahmadiyya Muslim Community. He explained how the Ahmadiyya community differs from all the other sects of Islam. And that Ahmadiyya Muslim community is the only community who believe that the promised reformer of this age, whose advent is awaited by every major religion of the world, has arrived more than 125 years ago in Qadian, India and his name was “Mirza Ghulam Ahmad” (PBOH).

“By the Grace of Allah, this community have spread in 206 countries of the world so far and still counting. The slogan of this community is: “Love for All, Haltered for None”. There is one supreme worldwide head of this community called “Khalifa” who leads members in their all moral, spiritual and Islamic teachings. Recently the Khalifa has been addressed to all major parliaments and the head of their governments in spreading the message of love and peace”, said Imam Shamshad.

Followed by the presentation there was a question and answer session. Students fully participated and they asked Imam all the questions very anxiously about Islamic teachings and the Ahmadiyya Muslim Community which were still in their minds. Imam Shamshad provided very comprehensive answers to each questioned asked, up to the full satisfaction of young students.

One of the student asked “why there is a partition between men and women and they are separated from each other in the mosque?
Imam Shamshad softly replied that “Its not only in Islam. Many major religions do emphasize on the separation of two genders and if you see the history of the church and synagogue you will find that this was their practice also, But the thing is that Muslims are the only one who follow the original divine teachings while and others have abandoned it.” 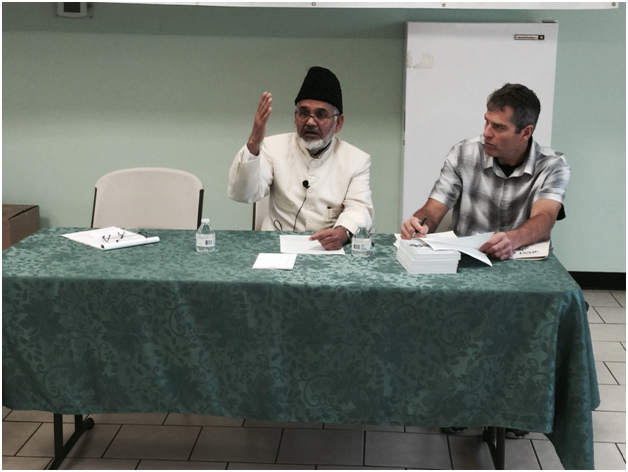 This very interesting program concluded with warm wishes and compliments to each other. Imam Shamshad openheartedly welcomed all the students and faculty for any upcoming event or visit to the Mosque in future and gave to Teacher Mr. Dave the book “Path to peace.”