There may be flowing water on Mars. But is there intelligent life on Earth?

While we marvel at Nasa’s discoveries, we destroy our irreplaceable natural resources – so we can buy pre-peeled bananas and smartphones for dogs 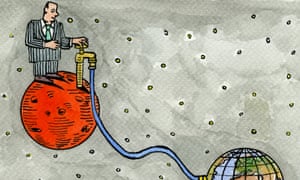 ‘Think of what would change if we valued terrestrial water as much as we value the possibility of water on Mars.’

Evidence for flowing water on Mars: this opens up the possibility of life, of wonders we cannot begin to imagine. Its discovery is an astonishing achievement. Meanwhile, Martian scientists continue their search for intelligent life on Earth. 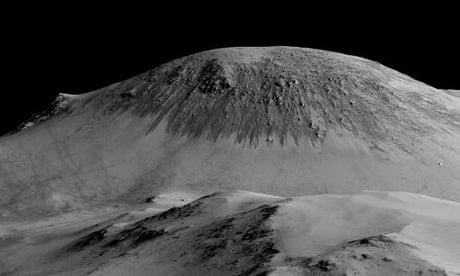 We may be captivated by the thought of organisms on another planet, but we seem to have lost interest in our own. The Oxford Junior Dictionary has been excising the waymarks of the living world. Adders, blackberries, bluebells, conkers, holly, magpies, minnows, otters, primroses, thrushes, weasels and wrens are now surplus to requirements.

In the past four decades, the world has lost 50% of its vertebrate wildlife. But across the latter half of this period, there has been a steep decline in media coverage. In 2014, according to a study at Cardiff University, there were as many news stories broadcast by the BBC and ITV about Madeleine McCann (who went missing in 2007) as there were about the entire range of environmental issues.

Think of what would change if we valued terrestrial water as much as we value the possibility of water on Mars. Only 3% of the water on this planet is fresh; and of that, two-thirds is frozen. Yet we lay waste to the accessible portion. Sixty per cent of the water used in farming is needlessly piddled away by careless irrigation. Rivers, lakes and aquifers are sucked dry, while what remains is often so contaminated that it threatens the lives of those who drink it. In the UK, domestic demand is such that the upper reaches of many rivers disappear during the summer. Yet still we install clunky old toilets and showers that gush like waterfalls.

Human ingenuity is on abundant display at Nasa, which released those astounding images. But not when it comes to policy.

As for salty water, of the kind that so enthrals us when apparently detected on Mars, on Earth we express our appreciation with a frenzy of destruction. A new report suggests fish numbers have halved since 1970. Pacific bluefin tuna, which once roamed the seas in untold millions, have been reduced to an estimated 40,000, yet still they are pursued. Coral reefs are under such pressure that most could be gone by 2050. And in our own deep space, our desire for exotic fish rips through a world scarcely better known to us than the red planet’s surface. Trawlers are now working at depths of 2,000 metres. We can only guess at what they could be destroying.

A few hours before the Martian discovery was announced, Shell terminated its Arctic oil prospecting in the Chukchi Sea. For the company’s shareholders, it’s a minor disaster: the loss of $4bn; for those who love the planet and the life it sustains, it is a stroke of great fortune. It happened only because the company failed to find sufficient reserves. Had Shell succeeded, it would have exposed one of the most vulnerable places on Earth to spills, which are almost inevitable where containment is almost impossible. Are we to leave such matters to chance?

At the beginning of September, two weeks after he granted Shell permission to drill in the Chukchi Sea, Barack Obama travelled to Alaska to warn Americans about the devastating effects that climate change caused by the burning of fossil fuels could catalyse in the Arctic. “It’s not enough just to talk the talk”, he told them. “We’ve got to walk the walk.” We should “embrace the human ingenuity that can do something about it”. Human ingenuity is on abundant display at Nasa, which released those astounding images. But not when it comes to policy.

Let the market decide: this is the way in which governments seek to resolve planetary destruction. Leave it to the conscience of consumers, while that conscience is muted and confused by advertising and corporate lies. In a near-vacuum of information, we are each left to decide what we should take from other species and other people, what we should allocate to ourselves or leave to succeeding generations. Surely there are some resources and some places – such as the Arctic and the deep sea – whose exploitation should simply stop?

The Guardian view on the discovery of liquid water on Mars: cause for great celebration

Editorial: Now the search is on to find living organisms on the red planet. Even traces of primitive microbes would rank among the most important discoveries in history
Read more

All this drilling and digging and trawling and dumping and poisoning – what is it for, anyway? Does it enrich human experience, or stifle it? A couple of weeks ago I launched the hashtag #extremecivilisation, and invited suggestions. They have flooded in. Here are just a few of the products my correspondents have found. All of them, as far as I can tell, are real.

An egg tray for your fridge that syncs with your phone to let you know how many eggs are left. A gadget for scrambling them – inside the shell. Wigs for babies, to allow “baby girls with little or no hair at all the opportunity to have a beautifully realistic hair style”.The iPotty, which permits toddlers to keep playing on their iPads while toilet training. A £2,000 spider-proof shed. A snow sauna, on sale in the United Arab Emirates, in which you can create a winter wonderland with the flick of a switch. A refrigerated watermelon case on wheels: indispensable for picnics – or perhaps not, as it weighs more than the melon. Anal bleaching cream, for… to be honest, I don’t want to know. An “automatic watch rotator” that saves you the bother of winding your luxury wrist-candy. A smartphone for dogs, with which they can take pictures of themselves. Pre-peeled bananas, in polystyrene trays covered in clingfilm; Just peel back the packaging.

Every year, clever new ways of wasting stuff are devised, and every year we become more inured to the pointless consumption of the world’s precious resources. With each subtle intensification, the baseline of normality shifts. It should not be surprising to discover that the richer a country becomes, the less its people care about their impacts on the living planet.

Our alienation from the world of wonders, with which we evolved, has only intensified since David Bowie described a girl stumbling through a “sunken dream”, on her way to be “hooked to the silver screen”, where a long series of distractions diverts her from life’s great questions. The song, of course, was Life on Mars.