Separated by geography and language, there’s not much that might seem to connect India’s five dwindling Jewish communities – except praying in Hebrew, and food.

East of the Hooghly River in the Indian city of Kolkata sits Barabazar, a wholesale market whose history goes back to the 18th Century. Everything – from spices, clothes and electronics to salvaged doors and second-hand furniture – is traded here. Amidst this bustling grid of roads, at the corner of Brabourne Road and Canning Street, sits the imposing Magen David Synagogue. Adjacent to it is the city’s oldest existing synagogue, Neveh Shalom Synagogue.

Built in Italian Renaissance style in the late-19th Century with bright brick finish, beige trim, arches and a pointed tower, Magen David is striking. Inside, chequered floors, ornate pillars, shimmering chandeliers and stained-glass windows make for a memorable image. However, the synagogue is deserted on most days, and hardly any religious activity takes place.

Kolkata is home to the Baghdadi Jews, who were once abundant enough to warrant five synagogues; now there aren’t enough for a minyan (minimum [10] male Jews required for liturgical purposes). Magen David and the smaller Beth El Synagogue on nearby Pollock Street were both classified as protected monuments and renovated by the Archaeological Survey of India in 2017. Today, they are tourist destinations, and kept open for the odd visitor.

The story of disappearing Jewish populations finds echoes elsewhere in India. Esther David’s recent book, Bene Appetit: The Cuisine of Indian Jews, is an attempt to preserve the culinary traditions of these diminishing communities. Jews are believed to have first arrived in India about 2,000 years ago, according to David. Since then, until two centuries ago, waves of Jewish immigrants continued to come here from various parts of the world, fleeing persecution and looking for better livelihoods. Once they landed, they settled in disparate corners of the country.

The largest group, the Bene Israel Jewish community, is spread over Mumbai and Pune in Maharashtra and parts of Gujarat; while Malabar or Cochin Jews can be found in in Kerala. Baghdadi Jews settled in Kolkata; Bene Ephraim Jews near Machilipatnam, Andhra Pradesh; and Bnei Menashe Jews in Manipur and Mizoram. By 1940, an estimated 50,000 Jews called India home. But widespread immigration to Israel in the 1950s slowly whittled away the numbers and it is estimated that fewer than 5,000 remain. 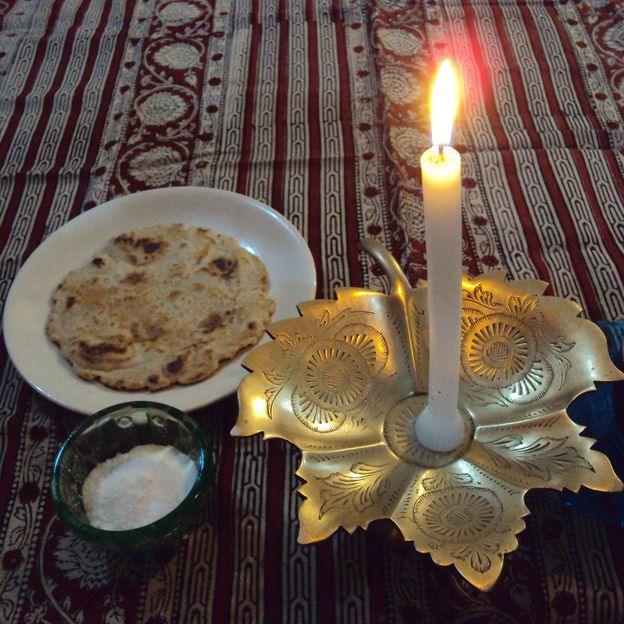 For Indian Jews, the Shabbat ceremony can include chapatis and grape sherbet (Credit: Esther David)

Predictably, they amalgamated into the local communities and adapted the local language and culinary influences. So much so that each community is now distinct. No two speak the same language and much of their food varies widely. Yet, certain points of overlap remain: all five communities continue to pray in Hebrew and all maintain the dietary laws – which includes no mixing of dairy and meat, no pork, no shellfish, no fish without scales – that are fundamental to the religion.

“The food of the Indian Jews has regional influences, but [while Jewish cuisine elsewhere usually has a meat element] their staple diet is fish [with scales] and rice,” David explained, noting that Indian Jews end a meal with sweets made with coconut milk or fruit so as to not mix dairy with meat. “Because kosher meat is not always available, many of them follow a vegetarian diet,” she added. The cookbook does list a number of meat dishes, but these are cooked occasionally, on special and festive occasions.

You may also be interested in:
• The last Paradesi Jews of Cochin
• A return to vegetarian Jewish cuisine
• The Indian synagogues preserved by Muslims

Other distinctive adjustments David notes, include swapping challah for chapatis (unleavened bread) – taking care not to cook or smear it with ghee, as is usually done in India, if served with meat – and using homemade grape juice/sherbet for the Shabbat ceremony due to the unavailability of kosher wine.

An award-winning author and artist from the Bene Israel Jewish community, David confessed that she had only a passing interest in food. One of her previous works, Book of Rachel, has a protagonist who turns to cooking and each chapter begins with a Jewish recipe. Yet, a cookbook was never on the radar for David. A trip to the town of Alibaug (outside Mumbai, and Bene Israel homeland) to meet with a source changed things. The aromas and taste from dishes made by her source took her back to childhood and unlocked long forgotten memories. Hence the first line of Bene Appetit: “Food is memory”.

The exact moment of deciding to write a cookbook on Indian Jewish cuisine, however, occurred far away from home, in Paris, at the launch of one of her novels, where she cooked Bene Israel Jewish dishes and started thinking of documenting Indian Jewish dishes across the country. Back home, she reached out to the communities, travelled and met people, and collected their recipes. When the pandemic hit, work progressed online, and the book was published in 2021. 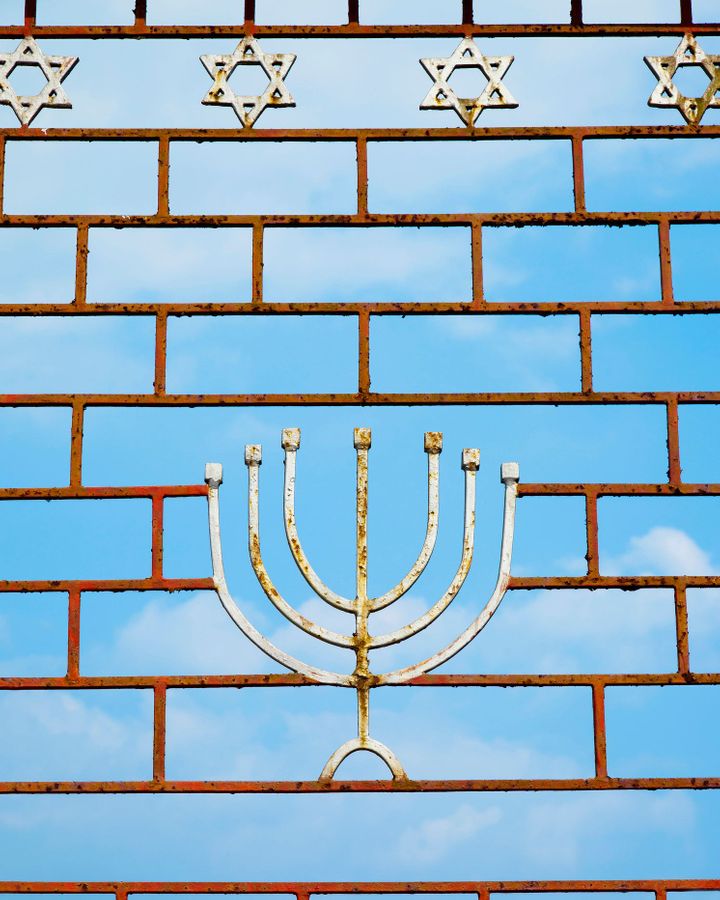 The arc in the food story of each of the five communities is a factor of history. In Kolkata, the change in cuisine possibly happened soon after the Iraqi Jewish immigrants arrived and discovered Indian spices. Author Sonal Ved, in her book Whose Samosa Is It Anyway? The Story of Where “Indian” Food Really Came From, says when they arrived in the 1800s, they probably knew only such ingredients as chilli and garlic. When they discovered the rest, it “gave rise to a whole new hybrid Jewish cuisine, which had preparations like arook (meaning “veined” in Hebrew and Arabic), rice balls flavoured with garam masala; pantras, beef-stuffed pancakes sprinkled with turmeric, ginger and garam masala; hanse mukhmura, a duck-based dish where the meat is cooked with almonds, raisins, bay leaf, tamarind paste and ginger root; and aloo-m-kalla murgi, pot-roasted chicken with potatoes.”

At the other end of the country, Mattancherry is a tiny locality south of Kochi on the Kerala coast that’s home to Jew Town, a mishmash of a few streets with shops selling antiques, spices, knickknacks and local handicrafts, interspersed with cafes and eateries. At the end of Synagogue Lane is the 17th-Century Paradesi (foreign) Synagogue, built with sloped tiled roofs, blue and white willow-patterned tiles, Belgian chandeliers, Jewish symbols and four scrolls of the Torah.

Outside, the humid coastal air carries the aromas of spices, something that Kerala has always had in abundance. As a trading community, the Malabar Jews sensed an opportunity and ended up controlling the local spice trade. Unsurprisingly, Malabari Jewish cuisine today is redolent with spices and tempered with coconut milk (an essential part of traditional Kerala cuisine), which works well with Jewish dietary laws. Here you’ll find Malabar Jews eating flavoursome curries made with fish, chicken and vegetables, as well as sambhar (lentil and vegetable gravy), eaten with rice. There are also appam (rice hoppers), meen pollichathu (green fish curry), Jewish fish kofta curry, chicken in coconut curry; and puddings and payasam (a kind of porridge) made coconut milk. An unusual dish is pastel, something similar to an empanada, stuffed with minced chicken.

In western India, home to the Bene Israeli Jews, the local influences are unmistakable. Poha (beaten rice) is a familiar Maharashtrian staple used to make breakfast and snacks, but also finds a strong presence in local Jewish food. The poha is washed and mixed with grated coconut, an array of dry fruits and nuts and chopped seasonal fruit, and forms an integral part of the malida (a local Jewish thanksgiving ceremony). But there are also unusual dishes such as chik-cha-halwa, a signature Bene Israeli sweet made by reducing wheat extract and coconut milk. 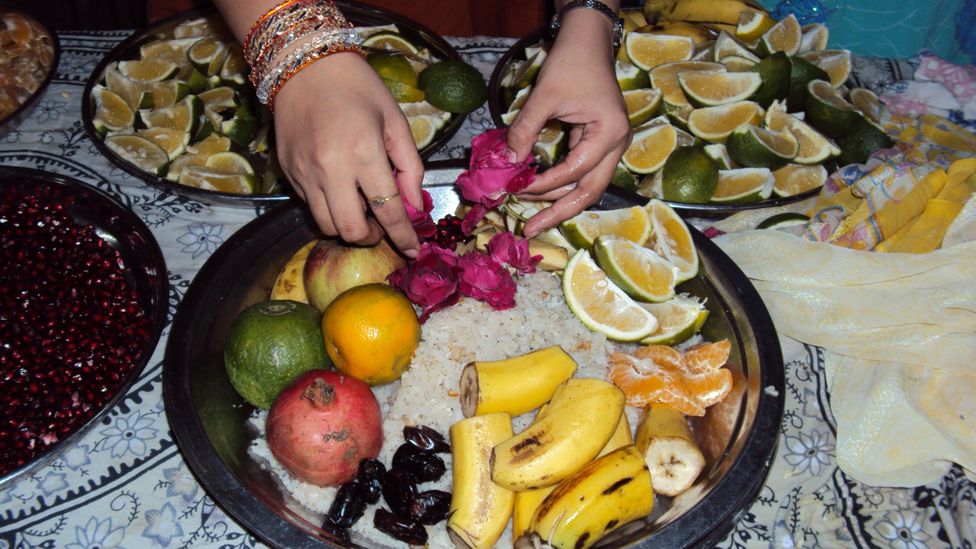 The Bene Israeli Jews have incorporated Maharashtrian staples into their diet, such as using poha in the malida ceremony (Credit: Esther David)

On India’s east coast, Machilipatnam, a little port town in Andhra Pradesh’s Krishna district, and a few other nearby rural towns are home to the Bene Ephraim Jews, a population of a mere 50. Andhra’s fiery food (Andhra Pradesh is India’s largest producer of chillies) finds its way into the local Jewish cuisine, with spicy curries accompanying local Andhra dishes that fit into the Jewish tradition, such as tamarind rice, lemon rice, biryani, chicken with gongura (tangy roselle leaves), sambhar, chutneys and a sweet called bobbatlu (a flat, round wheat envelope with a sweet lentil filling).

And in India’s north-east, the Bnei Menashe Jews in Manipur and Mizoram rely on rice – which is a local staple and eaten for all meals, including breakfast – and accompaniments cooked with fiery red or green chillies as is the local practice. These include such dishes as bamboo-cooked fish, bamboo shoot sauce, a variety of greens including colocasia stir fry and mustard leaves, otenga (a dish made with elephant apple), rice puris (fried puffed bread) and even an egg chutney and rice pudding made with local black rice.

It was both surprising and heartening at the same time. Indian Jews are united by their food heritage

Along with recipes, David’s book also documents how Jews of each region celebrate Jewish festivals and traditions (Shabbat, Rosh Hashanah, Yom Kippur, Passover, Hanukkah and others) and have adopted cultural aspects from the local communities, such as mehendi (henna designs traditionally drawn on the bride’s – and other women’s – hands and legs during a Hindu wedding) and the wearing of saris and bangles.

For David, travelling from community to community, and faced with language and geographical differences, it was the similarities that stood out.

“It was both surprising and heartening at the same time,” she said. “Indian Jews are united by their food heritage.”

If you liked this story, sign up for the weekly bbc.com features newsletter called “The Essential List”. A handpicked selection of stories from BBC Future, Culture, Worklife and Travel, delivered to your inbox every Friday.