Dozens injured in riots in Sweden after Quran burnings 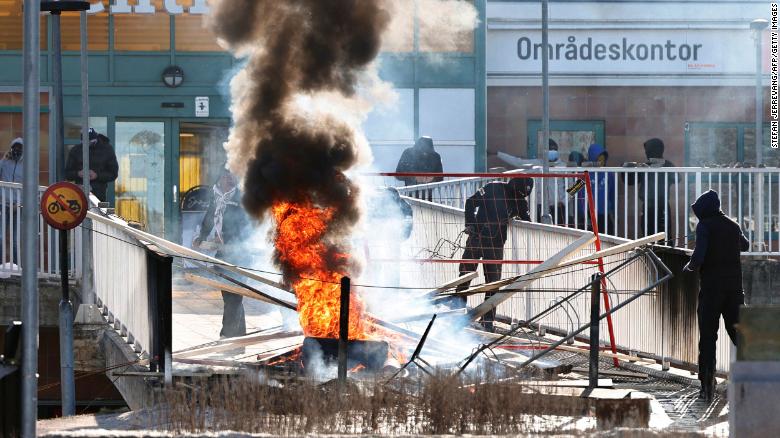 Protesters burn a barricade at the entrance to a shopping center during rioting in Norrköping, Sweden, on Sunday.

(CNN)Forty people have been injured in riots that broke out over Easter weekend in southern Sweden following a far-right anti-Muslim rally.

Some 26 police and 14 members of the public were injured, the spokesperson said, adding that police had arrested 26 individuals, including four minors, in Linköping and Norrköping where the violence began on Friday. There would be “more to come” as police analyze footage, the spokesperson added.

The riots erupted in several of Sweden’s southern cities after burnings of the Quran by Rasmus Paludan, leader of the Danish far-right Stram Kurs (Hard Line) party.

Paludan planned and carried out the anti-Muslim demonstration, posting a picture of himself on social media with a burning Quran and declared intentions of burning more. 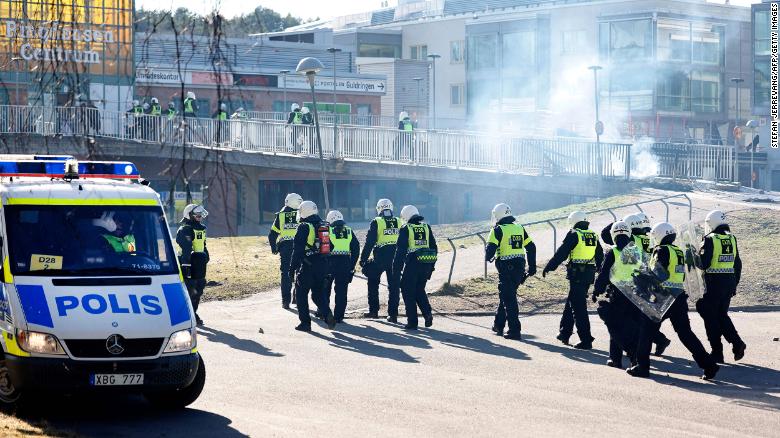 Riot police pass a barricade to enter a shopping center during rioting in Norrköping.

Police “don’t know for sure yet” if the riots began as a protest to the anti-Muslim rally led by Paludan, the spokesperson said, adding that the police were “looking into why and who.” CNN has reached out to Stram Kurs for comment.

In the city of Norrköping, three people needed medical attention after being hit by police bullets during clashes between police and protesters.

“Three people seem to have been hit by ricochets and are now being cared for in hospital. All three injured are arrested on suspicion of crime,” police said in an online statement, adding none of the injuries were life-threatening.

The violence spread south to the city of Malmö on Saturday and continued throughout Sunday, the spokesperson said.

Police used weapons against the rioters, the spokesperson said, but would not confirm local media reports that tear gas was used. Rioters can be seen hurling objects at police in video filmed by the Reuters news agency Sunday, which also shows vehicles ablaze. 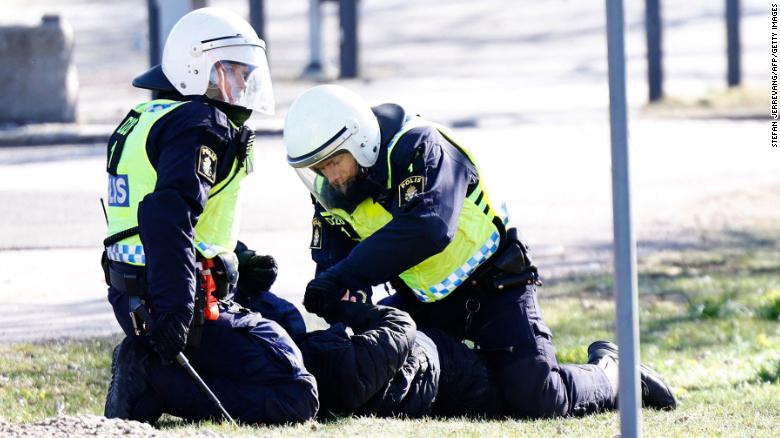 Police arrest a protester during rioting in Norrköping.

Police believe that people with links to criminal gangs took advantage of the situation, according to the spokesperson.

Officers saw no further unrest on Monday but will continue to be present in Norrköping, they added.

Countries with Muslim majority populations have condemned the burnings of the Quran, with Saudi Arabia calling Paludan’s actions a “deliberate abuse of the Holy Qur’an.”

In a statement published on their state news agency SPA on Sunday, the kingdom called the burnings “provocations and incitement against Muslims by some extremists in Sweden” and stressed “the importance of concerted efforts to spread the values of dialogue, tolerance and coexistence, reject hatred, extremism and exclusion, and prevent abuse of all religions and sanctities.”

The ‘anti-woke’ crusade has come to Europe. Its effects could be chilling

Turkey’s Foreign Ministry denounced the “vile attacks against our holy book,” adding in a statement: “There is still hesitation to prevent Islamophobic and racist provocative acts, and committing crimes of hatred openly and publicly are tolerated under the guise of freedom of expression.”

In Iraq, the government urged the Swedish authorities to stop “provocative” actions.

“[The act] was considered a provocation to the feelings of Muslims and extremely offensive to their sanctities…this matter has serious repercussions on the relations between Sweden and Muslims in general,” a statement by the Iraqi Ministry of Foreign Affairs said on Sunday.

In a tweet, the Emirati diplomatic adviser to the president, Anwar Gargash, rejected the “hatred” and “intolerance” against Islam.

The Egyptian Ministry of Foreign Affairs “condemned the intentional abuse of the Holy Qur’an” by the far-right, saying it is “among the extreme right-wing practices that incite against immigrants in general and Muslims in particular.”

Kuwait “expressed its utter condemnation and disgust towards the acts of desecration perpetrated by Swedish extremists against the Holy Quran,” the state news agency KUNA said.

And Jordan’s Ministry of Foreign Affairs said the action “contradicts all religious values and principles, human rights principles and basic freedoms, and fuels feelings of hatred and violence and threatens peaceful coexistence.”