Fasting and Prayers above the Arctic Circle, in Alaska, Russia, Norway and Sweden 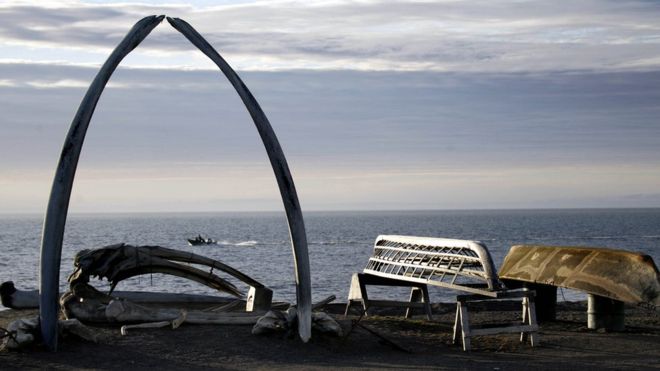 Whale bones sit on the edge of the city of Barrow or Utqiagvik, as it will now be called, where many residents are subsistence hunters.  The Muslim Times has the best collection of articles about religion & science

The sun sets for the last time over Barrow, Alaska.

On the 18th of November, 2016 at 13:31 local time, the sun set forever on America’s northernmost city of Barrow, Alaska.

That is because on Thursday the town officially changed its name to its original indigenous title, Utqiagvik. 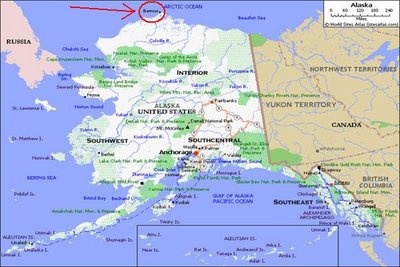 The city of about 4,300 people, which sits above the Arctic Circle, experiences more than two months of 24-hour darkness each winter.

Meteorologists predict that the sun will not rise again over the city until the afternoon of January 22nd, 2017.[1]

There may not be any Muslims in Utqiagvik or at least none that I know of, but there are hundreds of Muslims living in Norway and Sweden above the Arctic Circle.

Different countries above the Arctic Circle

It is a rare warm day in Tromsø, located 344 kilometers (214 miles) north of the Arctic Circle — a day when shoppers are more likely to buy an ice cream than a wool sweater.

The seagulls are screeching and the boss is asleep in his camper van when Ahmed Hammadan, working at the market stall set up nearby wonders aloud: Who is going to buy a Norwegian sweater on a day like today?

But Ahmed is troubled by a different, much more important question: When will the boss finally wake up? Again and again he glances through the open door into the ramshackle van, but the boss is still sleeping. Ahmed bounces from one foot to the other. He begins speaking faster, his sentences become shorter. He is eager for his shift to come to an end. In eight minutes, the afternoon prayer begins, the Asr, and it takes three minutes to get to the mosque. During Ramadan, praying is just as important as fasting, a meticulously prescribed obligation, to pray five times a day, no matter what.

It is 3:35 p.m. In two-and-a-half hours, the sun will go down in Mecca. In Istanbul the sun sets in four hours, in Marrakesh, six.

A 46-year-old from Morocco, Ahmed is wearing sweat pants, athletic shoes and the kind of wool cap favored by surfers. But his casual dress belies his rigorous approach to the fasting period. “It has to hurt, only then is it good,” he says. The rules of Ramadan hold that the faithful may not eat or drink until the sun goes down. It is sometimes painful, and many Muslims like Ahmed believe it should be. But for the Muslims in Tromsø, it ultimately became too painful. 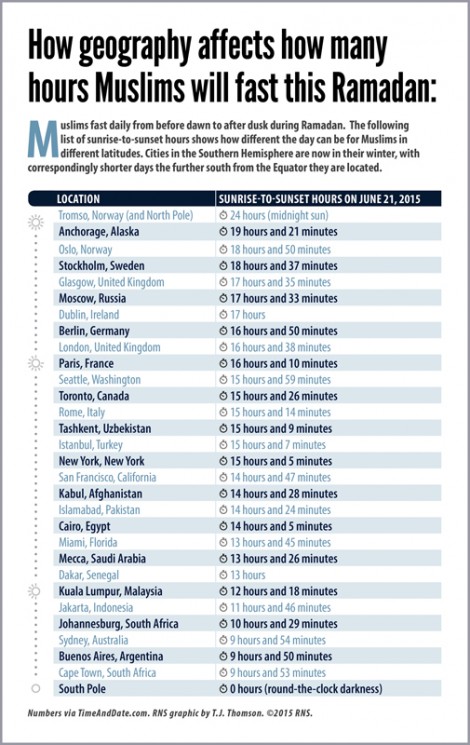 There are roughly 900 of them living in the city in Norway’s far north, and they have a problem for which the holy Quran provides no specific guidance. Traditionally, the fast lasts from a little before sunrise, when “the white thread of dawn appears to you distinct from the black thread” (Surah 2, Verse 187/188), until sunset. But here, in the northernmost university city in the world, the sun never goes down in the summer. For two months of the year, there is daylight around the clock. For tourists, the midnight sun is a natural phenomenon, something to experience. But for Muslims, it is a nightmare when Ramadan comes at exactly this time of year. Like this year. It is a nightmare that the holy Prophet Muhammad, may peace be on him, may not have been aware of, 1,400 years ago in the Middle East.[2]

There are some indirect references to 5 daily prayers or Salats in the Holy Quran and those are timed by sunrise and sunset.  For example the holy Quran says:

As the Muslims begin to understand the Quranic injunctions about fasting and prayers in more pragmatic and contemporary terms for Murmansk (population 307,257), Norilsk (175,365), Tromsø (71,295) and Vorkuta (70,548), they may also find better and wholesome understanding of the scripture, which may help them overcome many of the other problems facing some of the 1.5 billion of them, like fundamentalism and extremism.

Fundamentalism usually has a religious connotation that indicates unwavering attachment to a set of irreducible beliefs. However, fundamentalism has come to apply to a tendency among certain groups—mainly, though not exclusively, in religion—that is characterized by a markedly strict literalism as applied to certain specific scriptures, dogmas, or ideologies, and a strong sense of the importance of maintaining ingroup and outgroup distinctions, leading to an emphasis on purity and the desire to return to a previous ideal from which advocates believe members have strayed. Rejection of diversity of opinion as applied to these established “fundamentals” and their accepted interpretation within the group is often the result of this tendency.

Extremism within Islam goes back to the 7th century to the Kharijites. From their essentially political position, they developed extreme doctrines that set them apart from both mainstream Sunni and Shia Muslims. The Kharijites were particularly noted for adopting a radical approach to Takfir, whereby they declared other Muslims to be unbelievers and therefore deemed them worthy of death.

The Shia and Sunni religious conflicts since the 7th century created an opening for radical ideologues, such as Ali Shariati (1933–77), to merge social revolution with Islamic fundamentalism, as exemplified by the Iranian Revolution in 1979. Islamic fundamentalism has appeared in many countries; the Wahhabi version is promoted worldwide and financed by Saudi Arabia, Qatar and Pakistan.

Abu Huraira reported: The Messenger of Allah, Muhammad, peace and blessings be upon him, said, “Any word of wisdom is the lost property of the believer, so wherever he or she finds it, he or she should acquire it.”[3]

The Prophet also said, “Seek knowledge even if you have to go to China.”

If we study science, geography, history, psychology, sociology, anthropology and politics to name just a few, we not only acquire secular knowledge but also better understanding of religion and the holy Quran and in so doing overcome myopia leading to fundamentalism and extremism and other ills arising from a strict and literal understanding of the holy Quran.

If as Muslims, we find it difficult to identify tendencies of fundamentalism among ourselves, we can at least begin to see how insistence on literal understanding of scripture, creates problems among the Christians and the Jews and start our journey to enlightenment there.

Arctic Ramadan: fasting in land of midnight sun comes with a challenge

Fasting and Prayers above the Arctic Circle, in Alaska, Russia, Norway and Sweden https://t.co/wKpkM6EWXD @keithellison pic.twitter.com/TGi6XhLb6p