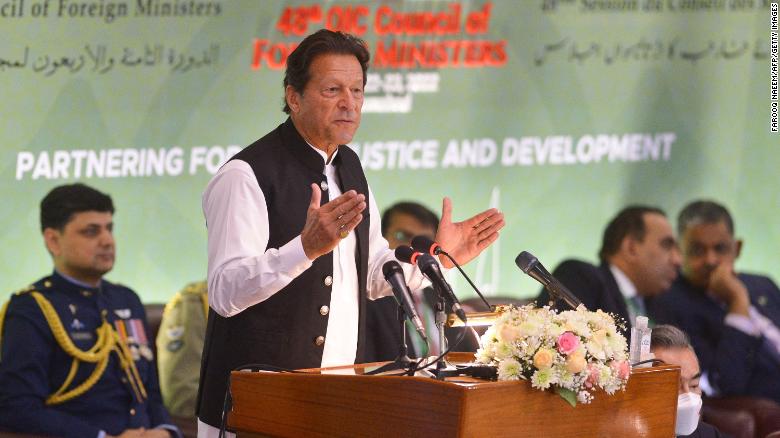 Pakistan Prime Minister Imran Khan during the 48th session of the Organization of Islamic Cooperation Council of Foreign Ministers, in Islamabad on March 22.

Islamabad, Pakistan (CNN)Pakistan’s Prime Minister Imran Khan has been ousted as the country’s leader following a vote of no confidence over allegations of economic mismanagement and mishandling of the country’s foreign policy, bringing an end to his tumultuous term in office.

The parliamentary vote, held Sunday, saw the former cricket star defeated. The opposition needed a minimum of 172 votes out of the 342 member assembly to oust him.

The vote of no confidence was backed by an alliance of politicians including more than a dozen defectors from Khan’s own political party.

The vote took place after Pakistan’s Supreme Court ruled Thursday a decision to block a previous vote of no confidence against Khan over allegations of economic mismanagement was unconstitutional.

In its decision, the Supreme Court also quashed Khan’s earlier order to dissolve parliament and call for early elections, calling it of “no legal effect.”

The speaker of the National Assembly will now send a notice to Khan and call for a fresh session of parliament to elect a new prime minister.

In an address to the nation Friday night, Khan repeated unverified claims the vote of no confidence was the result of a “foreign conspiracy” connected to the United States.

Khan said he had been singled out by the US because, unlike his opponents, he couldn’t “easily be used as a puppet by the West,” with regard to an independent foreign policy. He said he was not anti-American but would not let his nation “be used as a tissue paper” in a “one-sided relationship.”

He also called for nationwide protests Sunday against what he claimed was an attempt to “install” a new government by “foreign powers.”

On Thursday, the US State Department issued a statement saying there was “no truth” to Khan’s claims of interference.

“We are closely following developments in Pakistan, and we respect, we support Pakistan’s constitutional process and the rule of law, but when it comes to those allegations, there is no truth to them,” the statement said.

Sunday’s vote marked the latest escalation in a crisis smoldering for weeks, with Khan already having lost the backing of key political allies and the country’s powerful military.

Pakistan, a nation of 220 million, has struggled with political instability since its formation in 1947, with multiple regime changes and military coups. No prime minister has ever completed a full five-year term under the present constitution of 1973.

Khan’s ouster comes just short of four years in office and there are now concerns it could raise the risk of political instability in the South Asian nation.

Pakistan’s main opposition parties have been rallying for Khan’s dismissal since he rose to power in 2018 following an election mired in accusations of vote rigging and foul play.

More recently, he has been dogged by claims of fiscal negligence, as his government battles depleting foreign exchange reserves and double-digit inflation, with the cost of necessities such as food and fuel skyrocketing. On Thursday, the Pakistani rupee hit an all-time low, according to Reuters.

Khan’s response has been to repeat his claims that opposition to him is being fueled by the US.

His failure to work in tandem with his allies and the military led to a breakdown of relations within his coalition government.

As frustration with his leadership grew, the opposition filed a motion to hold a no confidence vote in parliament. They had urged Khan to resign ahead of the vote.

Instead, Khan called for an early election last Sunday in a dramatic attempt to cling to power after the deputy speaker of parliament blocked the vote of no confidence against him, which had appeared almost certain to succeed.

The move, and Khan’s subsequent dissolution of parliament, enraged an opposition that has for months demanded his removal.

The opposition responded by accusing Khan of treason and asking Pakistan’s highest court to rule on whether the prime minister had breached the constitution. The Supreme Court’s Thursday decision paved the way for Khan’s removal from office.

Arguably Pakistan’s best-known prime minister in recent decades, Khan has made a name for himself as a politician, philanthropist and sports star at home and around the world.

Born in 1952 to an affluent family in the city of Lahore, he received a prestigious education, rounded off with a degree in philosophy, politics and economics from Oxford University.

After making his debut for Pakistan’s cricket team in 1971, he went on to become one of the best players of his generation. 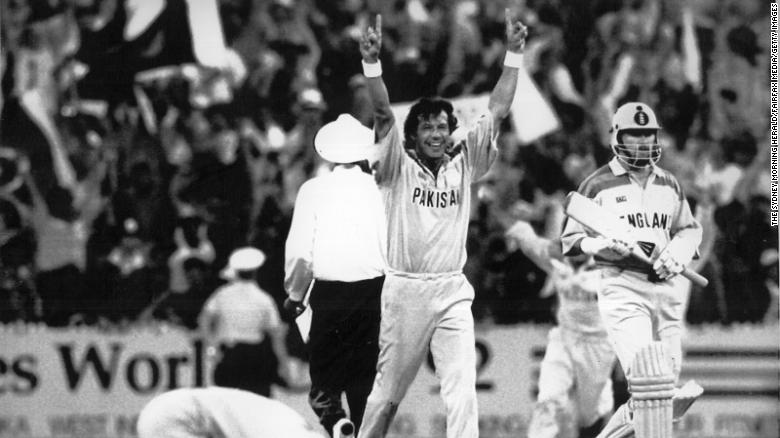 With his eyes set on politics, he mined his superstar popularity to become one of the most formidable politicians in Pakistan.

Riled by the constant state of corruption in the country, he founded his own political party in 1996, the Pakistan Tehreek-e-Insaaf (PTI), or the Movement for Justice.

Khan won a seat in parliament in 2002, but his party mostly languished in the political wilderness. In the summer of 2013, with a crop of new voters reared on tales of the magic of Khan, the PTI roared ahead in that year’s general elections, though they were unable to win a majority. 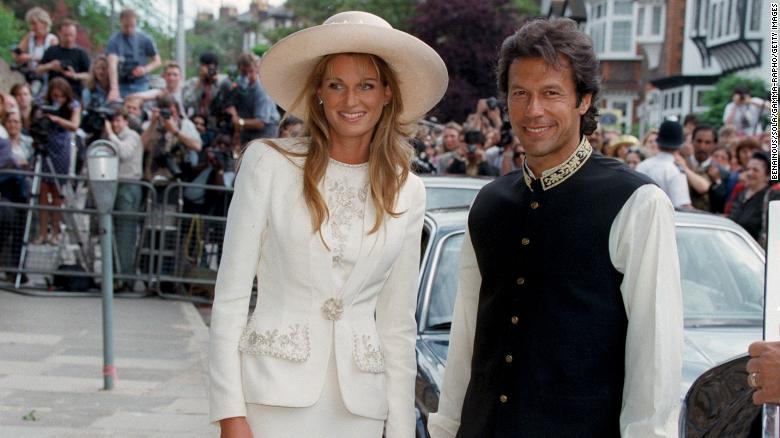 He led thousands of protesters to Islamabad against then-Prime Minister Nawaz Sharif, shutting down the capital in August 2014 during a sit-in lasting months that became known as the Azadi march, or freedom movement.

In 2018, after more than two decades of struggles in politics, Khan achieved his long-awaited dream of becoming prime minister, promising a “new Pakistan,” and vowing to eradicate poverty and corruption.

His tenure saw him face numerous hurdles, from rising inflation to a global pandemic. Khan’s government has also dealt with record slumps in foreign exchange reserves, and last year accepted a $6 billion bailout from the International Monetary Fund.

In 2019, rising hostilities between Pakistan and neighboring India saw clashes between the two nuclear-armed states. But diplomacy on both sides led to a simmering stalemate that lasted throughout Khan’s premiership, with much praise going to the Pakistani leader for his professional and peaceful conduct.

The following year, the coronavirus pandemic once again tested Khan’s leadership, as thousands of cases were reported in Pakistan, which closed borders and imposed lockdowns in an attempt to curb the virus’ spread.

In August 2021, Khan watched closely as the Taliban began their insurgency in neighboring Afghanistan. Pakistan has deep ties with the extremist group and has been accused of supporting the Taliban as they battled the US-backed government — charges denied by Islamabad.

For much of his term, Khan pushed anti-American rhetoric, blaming the US for the situation in Afghanistan. In a sign of frayed relations, US President Joe Biden and Khan have not spoken since Biden took office last year.

Under Khan’s leadership, Pakistan maintained close relations with China. Strong economic, diplomatic and military ties mean Islamabad is one of Beijing’s closest allies in the region, while China has also invested heavily in Pakistan in recent years through its Belt and Road trade and infrastructure scheme.

Khan also refused to condemn Russia’s invasion of Ukraine, sparking renewed calls from the opposition for him to step down.

On a state visit last month, Khan met with Russian President Vladimir Putin in Moscow on February 24, the day Russia began its assault on its democratically-governed neighbor. 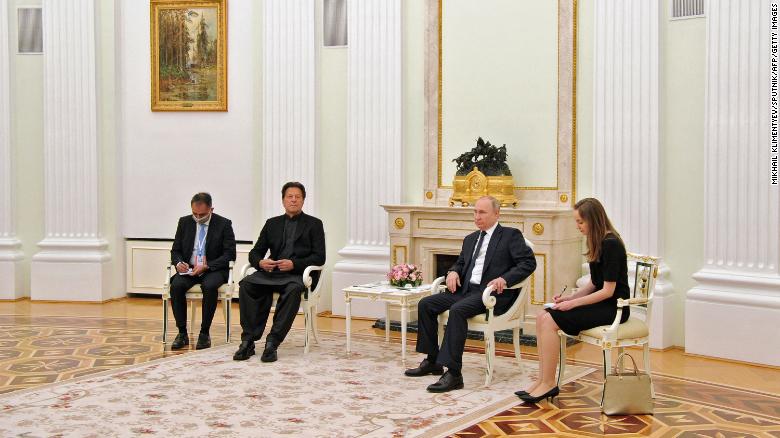 With detractors citing poor foreign policy decisions and spiraling inflation, Khan won a confidence vote from parliament just over a year ago. But on Saturday, his luck ran out.