BY MICHAEL LIPKA AND DAVID MASCI

Just in time for the holidays, here are five facts about Christmas in America and how people celebrate it: 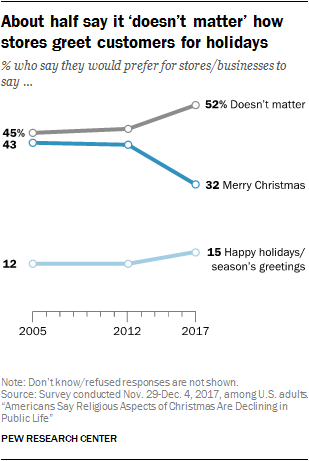 When they go to the store, which greeting do Americans prefer: “merry Christmas” or “happy holidays”? For some, this can be a sensitive question, but an increasing number of Americans do not seem to have strong feelings either way. About half of Americans (52%) now say it doesn’t matter how stores greet their customers over the holidays, up from 46% in 2012. About a third (32%) choose “merry Christmas” – down considerably from the 42% who said this five years ago. Republicans are much more likely than Democrats to say they prefer “merry Christmas.” 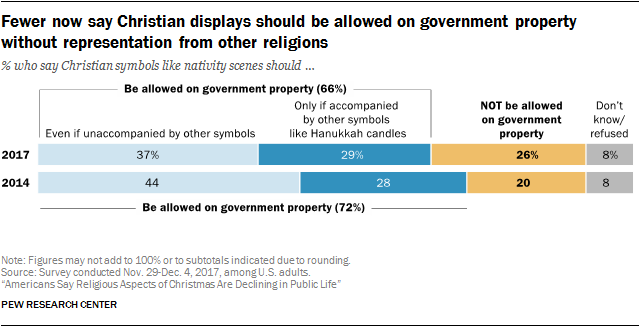 4 Americans have long argued about whether nativity scenes and other religious holiday displays on public property violate the Establishment Clause of the U.S. Constitution’s First Amendment. In the 1980s, the Supreme Court handed down two landmark rulings that allow for displays of Christmas crèches, Hanukkah menorah and other religious holiday symbols on public property so long as they do not actively endorse or promote a particular religion or religion in general. In practice, religious symbols that are a part of larger secular holiday display (containing, say, Christmas trees, Santa Claus and reindeer) have had a much better chance of surviving a court challenge than those displays that are solely or more overtly religious. 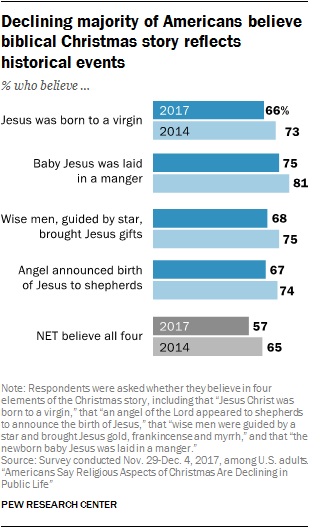 Most Americans believe that elements of the biblical Christmas story reflect actual historical events, although the percentage expressing this view has dropped noticeably in recent years. Two-thirds (66%) say Jesus was born to a virgin, compared with 73% who said this in 2014; 75% believe he was laid in a manger, down from 81%. Similarly, the shares who say they believe that wise men, guided by a star, brought Jesus gifts — and that an angel appeared to shepherds to announce the birth of Jesus — also have declined. A slim majority of U.S. adults (57%) believe that all four of these things actually happened, down from 65% three years ago. Belief in these events has declined not only among people with no religious affiliation, but among Christians as well. Overall, about one-in-five Americans (19%) now say none of these things actually happened.