By now, all things being equal, Zemari Ahmadi would have moved to a country he and his family considered “safe,” a reward for his 14 years working for a California-based aid group.

That is, if he wasn’t killed in a drone strike launched by his presumed safe haven – the United States – on August 29.

The Afghan died alongside his three children and six other relatives. An electrical engineer, Ahmadi, who was 43, was the breadwinner of his family, and at the time of his death, was awaiting a U.S. visa which would have allowed him to take his family out of Afghanistan.

But a drone strike that took the life of 10 family members ended that dream tragically.

“It was a doomsday,” Ajmal, Ahamadi’s younger brother who lost his 3-year-old daughter, told CGTN. “Nothing can heal my family’s pain now, but compensation can be a possible remedy for at least the two mothers who lost their seven children in a blink of eye.”

Nearly four months on, the streets of the family’s residential neighborhood in Kabul are empty, a sharp contrast to when it was packed with journalists eager to find out what happened in the wake of the drone strike.

The grim tranquility not only masks the unspeakable sorrow and frustration still felt by Ahmadi’s family but also of their feeling that they have been neglected by the Americans.

The family house where 10 civilians including seven children died after a U.S. drone strike in Kabul, Afghanistan, September 18, 2021. /CFP

At first, the Ahmadis had to stomach the accusation of having given shelter to “a terrorist,” even as they were sorting the bodies of their loved ones amid the rubble and wreckage of their homes. “A righteous strike” – the term used by the Pentagon at the time – triggered questions from journalists as to whether the family was hiding other “terrorists.”

But it was soon revealed that the 10 Afghans, including seven children, killed by the strike were all innocent civilians. And not so soon was the Pentagon’s admission that the strike was a “grievous mistake,” which came over half a month too late.

But will the Americans remedy the catastrophic mistake as they promised? This is a question the Ahmadis are dying to hear the answer to.

To compound their sense of injustice, however, the Pentagon decided last week that none of the military personnel involved in the botched drone strike would be punished, a decision that has drawn widespread criticism.

“If those who committed the crime are not punished, at least the U.S. should be accountable in paying us compensation and resettling us in a safe country,” Ajmal said.

The Pentagon has promised to compensate the Ahmadis financially and coordinate with the State Department to help relocate them to the U.S. Yet while that pledge brings a measure of solace to the Ahmadi family, an unexpected downside is the safety risk to which they now feel exposed.

Emal, another brother, said that all family members are now unemployed and they can’t risk sending their remaining children to school over threats posed by unknown people who think the family has received a big sum of compensation money and call them “opportunists.” 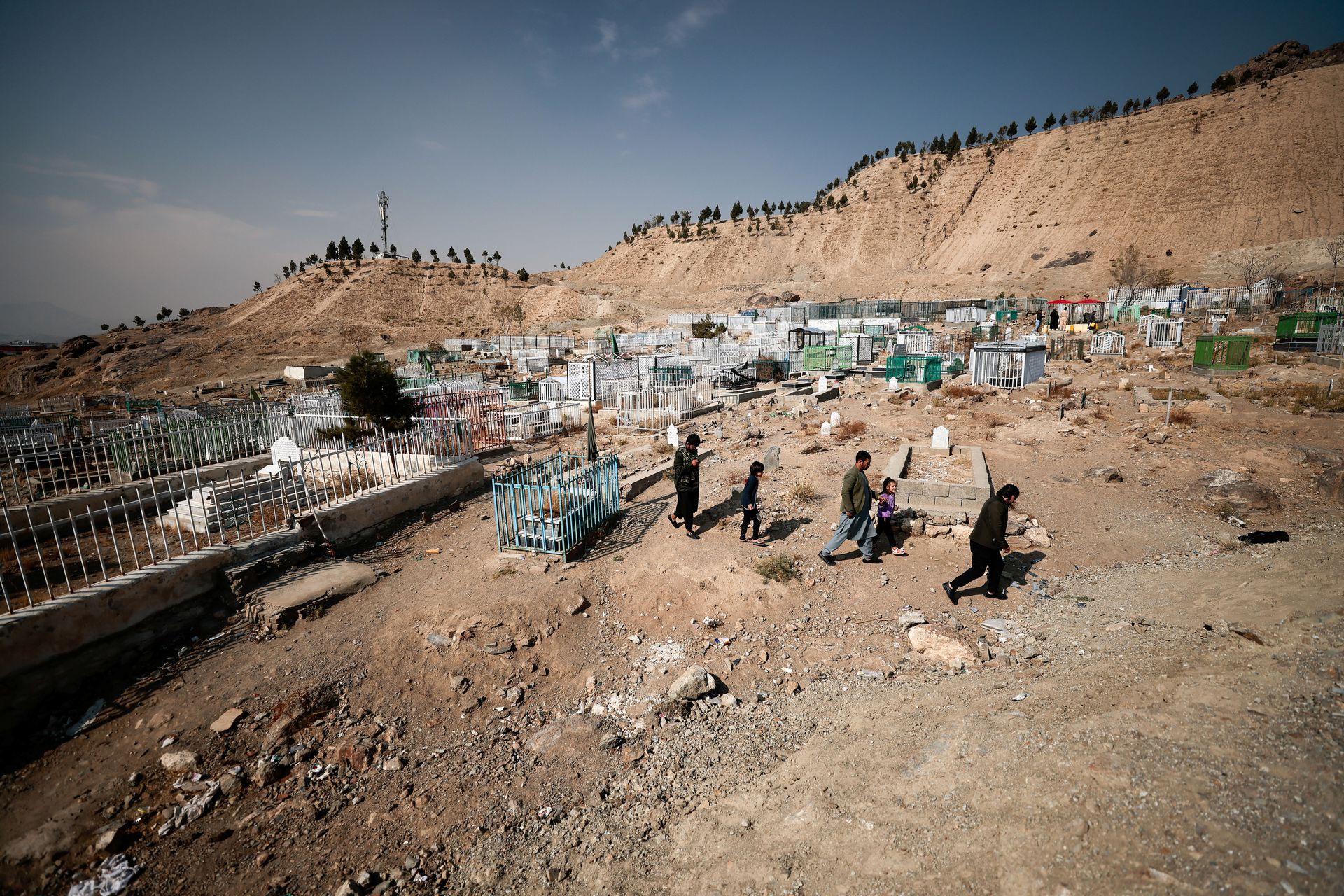 Emal Ahmadi, his brother Ajamal and their children leave the cemetery after praying by the graves of their family members who were victims of a U.S drone strike that killed 10 civilians, including seven children, in Kabul, Afghanistan November 7, 2021. /Reuters

The irony is, while they are suffering the consequences of promised reparation, the Ahmadis haven’t heard of any progress from the U.S. government since the promises were made.

“They have made lots of pledges to us; we haven’t received any compensation so far,” Romal, Ahmadi’s other brother who lost three children, told CGTN. “They said they will evacuate us from Afghanistan, but we’re still here.”

Both the U.S. State Department and the Pentagon did not respond to a CGTN email request for answers regarding the promised compensation and relocation. The Defense Department has previously said that due to the absence of U.S. troops in Afghanistan, it was not able to contact family members directly.

“People tell us that the U.S. has deceived us with their false promise, but it is the United States of America, a very big country,” Ajmal said, adding that they will keep raising their voices, until Washington feels the pressure from the international community.

Thirty-one-year-old Ajmal was not ready to talk only until recently. Referring to his daughter and six other nephews who were all under 10, Ajmal said “How can I forget them? I remember my little daughter’s giggles and the adorable faces of my nephews with whom I was a friend and we would go to nearby parks in Kabul very often.” 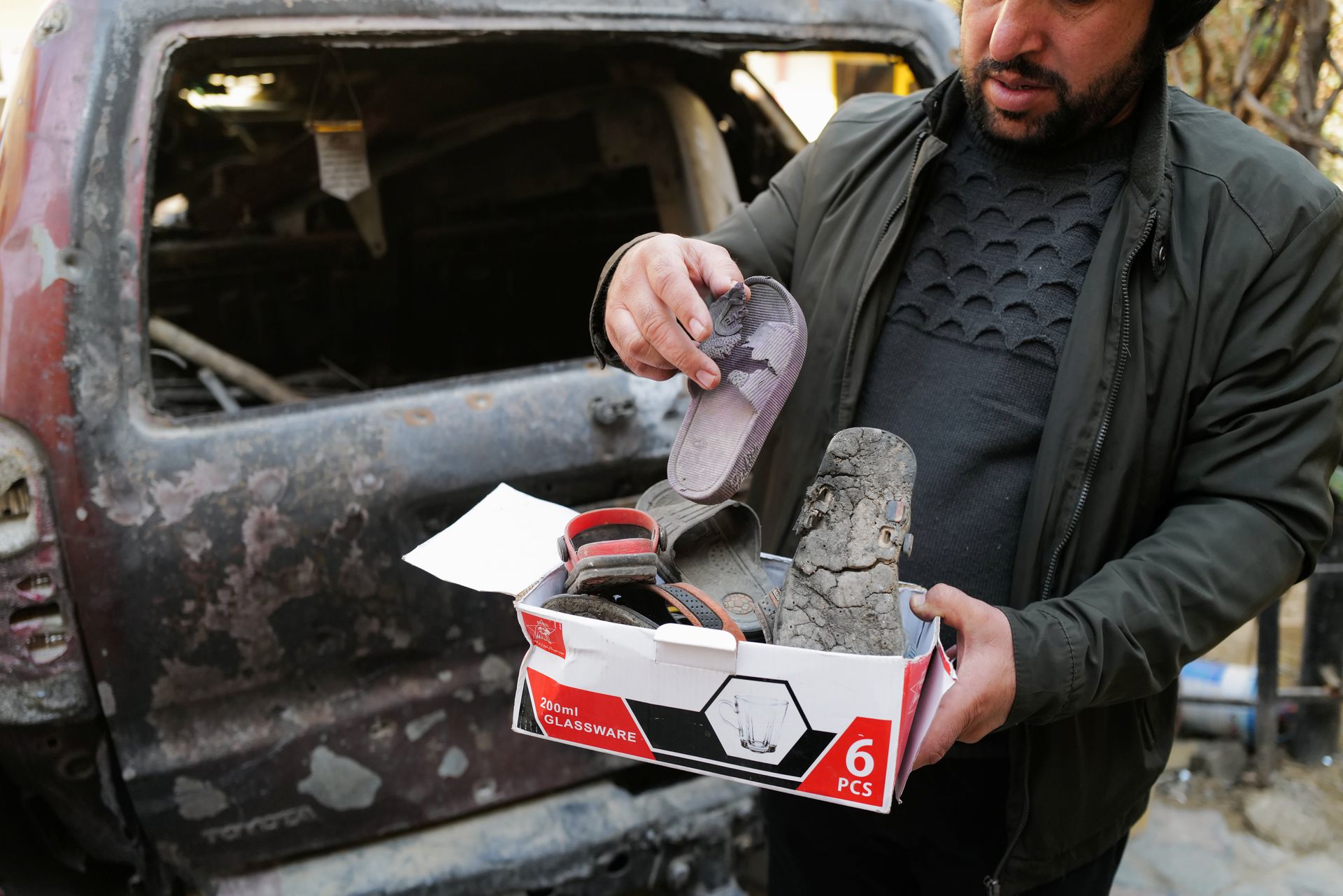 Ajmal Ahmad shows shoes of his nephews, victims of a U.S drone strike that killed 10 civilians, including seven children, as he stands beside a damaged car at the house’s courtyard in Khwaja Bughra in Kabul, Afghanistan November 7, 2021. /Reuters

He recalled those good days and then uncontrollably burst into tears. “My family saw them beheaded and burnt in fire as a result of the U.S. drone strike targeting our home.”

The mothers are now struggling with deep psychological trauma, he said.

The Ahmadis say they also feel like they have been forgotten by the Taliban, claiming that officials have paid just one visit.

In a previous interview with CGTN, Taliban spokesperson Zabiullah Mujahid said compensation for the family is “an ethical responsibility the U.S. must assume.”

“We want justice,” he said. “The U.S. has to compensate not only the family of the victims of the August 29 drone strike, but all the similar families who have lost their loved ones due to the blind attacks by the U.S. and its allied forces during the last 20 years.”