An immense mystery older than Stonehenge

By Andrew Curry 16th August 2021Reshaping previous ideas on the story of civilisation, Gobekli Tepe in Turkey was built by a prehistoric people 6,000 yea rs before Stonehenge.W

When German archaeologist Klaus Schmidt first began excavating on a Turkish mountaintop 25 years ago, he was convinced the buildings he uncovered were unusual, even unique.

Atop a limestone plateau near Urfa called Gobekli Tepe, Turkish for “Belly Hill”, Schmidt discovered more than 20 circular stone enclosures. The largest was 20m across, a circle of stone with two elaborately carved pillars 5.5m tall at its centre. The carved stone pillars – eerie, stylised human figures with folded hands and fox-pelt belts – weighed up to 10 tons. Carving and erecting them must have been a tremendous technical challenge for people who hadn’t yet domesticated animals or invented pottery, let alone metal tools. The structures were 11,000 years old, or more, making them humanity’s oldest known monumental structures, built not for shelter but for some other purpose.

After a decade of work, Schmidt reached a remarkable conclusion. When I visited his dig house in Urfa’s old town in 2007, Schmidt – then working for the German Archaeological Institute – told me Gobekli Tepe could help rewrite the story of civilisation by explaining the reason humans started farming and began living in permanent settlements.

The stone tools and other evidence Schmidt and his team found at the site showed that the circular enclosures had been built by hunter-gatherers, living off the land the way humans had since before the last Ice Age. Tens of thousands of animal bones that were uncovered were from wild species, and there was no evidence of domesticated grains or other plants.

Schmidt thought these hunter-gatherers had come together 11,500 years ago to carve Gobekli Tepe’s T-shaped pillars with stone tools, using the limestone bedrock of the hill beneath their feet as a quarry. 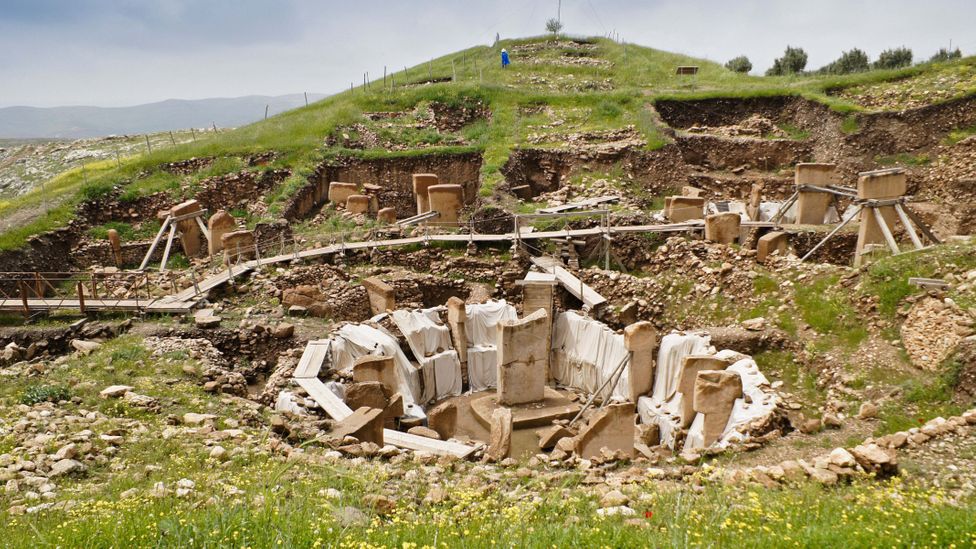 Situated in modern-day Turkey, Gobekli Tepe is one of the most important archaeological sites in the world (Credit: Michele Burgess/Alamy)

Carving and moving the pillars would have been a tremendous task, but perhaps not as difficult as it seems at first glance. The pillars are carved from the natural limestone layers of the hill’s bedrock. Limestone is soft enough to work with the flint or even wood tools available at the time, given practice and patience. And because the hill’s limestone formations were horizontal layers between 0.6m and 1.5m thick, archaeologists working at the site believe ancient builders just had to cut away the excess from the sides, rather than from underneath as well. Once a pillar was carved out, they then shifted it a few hundred metres across the hilltop, using rope, log beams and ample manpower.

You may also be interested in:
• The Maya’s ingenious sercret to survival
• Turkey’s mysterious portal to the universe
• Switzerland’s gravity-defying solution

Schmidt thought that small, nomadic bands from across the region were motivated by their beliefs to join forces on the hilltop for periodic building projects, hold great feasts and then scatter again. The site, Schmidt argued, was a ritual centre, perhaps some sort of burial or death cult complex, rather than a settlement.

That was a big claim. Archaeologists had long thought complex ritual and organised religion were luxuries that societies developed only once they began domesticating crops and animals, a transition known as the Neolithic. Once they had a food surplus, the thinking went, they could devote their extra resources to rituals and monuments.

Gobekli Tepe, Schmidt told me, turned that timeline upside down. The stone tools at the site, backed up by radiocarbon dates, placed it firmly in the pre-Neolithic era. More than 25 years after the first excavations there, there is still no evidence for domesticated plants or animals. And Schmidt didn’t think anyone lived at the site full-time. He called it a “cathedral on a hill”.

More than 25 years after the first excavations there, there is still no evidence for domesticated plants or animals.

If that was true, it showed that complex ritual and social organisation actually came before settlement and agriculture. Over the course of 1,000 years, the demands of gathering nomadic bands together in one place to carve and move huge T-pillars and build the circular enclosures prompted people to take the next step: to regularly host large gatherings, people needed to make food supplies more predictable and dependable by domesticating plants and animals. Ritual and religion, it seemed, launched the Neolithic Revolution.

The next day, I drove with Schmidt to the hilltop before dawn. I wandered, mystified and awestruck, among the pillars as Schmidt, his head wrapped in a white cloth to protect it from the blazing sun, oversaw a small team of German archaeologists and workers from the small village down the road. 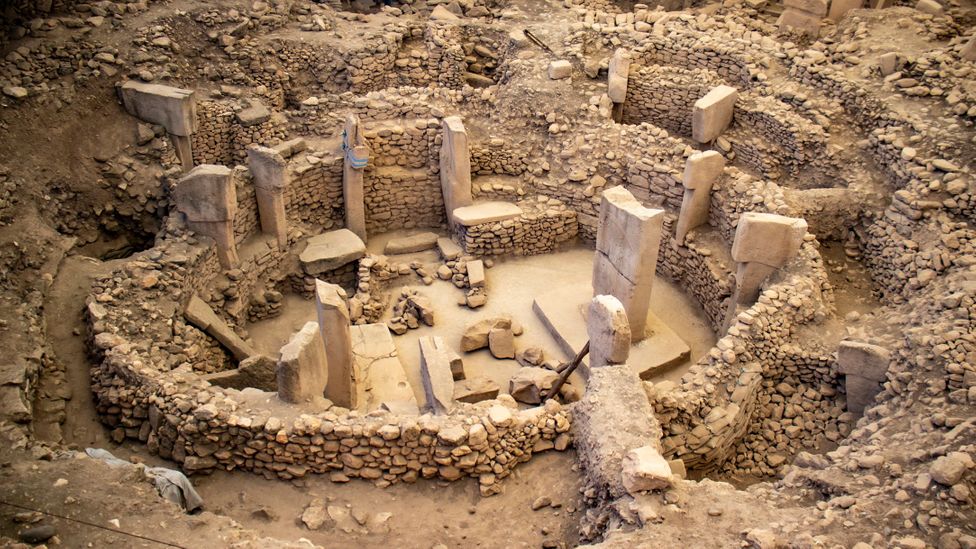 Schmidt had just published his first reports on Gobekli Tepe the year before, setting the small world of Neolithic archaeology experts abuzz. But the site still had a sleepy, forgotten feel, with excavation areas covered by makeshift corrugated steel roofs and potholed dirt roads winding up to the mountaintop dig site from the valley below.

Schmidt’s take on the site’s striking T-pillars and large, round “special buildings” captivated colleagues and journalists when they were first published in the mid-2000s. Breathless media reports called the site the birthplace of religion; the German magazine Der Spiegel compared the fertile grasslands around the site to the Garden of Eden.

Soon, people from around the world were flocking to see Gobekli Tepe for themselves. Within a decade, the hilltop was totally transformed. Until the civil war in nearby Syria disrupted tourism in the region in 2012, work on the site often slowed to a crawl as busloads of curious tourists crowded around open excavation trenches to see what some were calling the world’s first temple and made it impossible to manoeuvre wheelbarrows on the narrow paths.

Over the past five years, the mountaintop on the outskirts of Urfa has been reshaped once again. Today, roads and car parks and a visitor’s centre can accommodate curious travellers from around the world. In 2017, corrugated steel sheds were replaced by a state-of-the art, swooping fabric-and-steel shelter covering the central monumental buildings. The Şanlıurfa Archaeology and Mosaic Museum, built in 2015 in central Urfa, is one of Turkey’s largest museums; it features a full-scale replica of the site’s largest enclosure and its imposing T-pillars, allowing visitors to get a feel for the monumental pillars and examine their carvings up close.

In 2018, Gobekli Tepe was added to the Unesco World Heritage register, and Turkish tourism officials declared 2019 the “Year of Gobekli Tepe”, making the ancient site the face of its global promotion campaign. “I still remember the site as a remote place on a mountaintop,” said Jens Notroff, a German Archaeological Institute archaeologist who began working at the site as a student in the mid-2000s. “It’s changed completely.” 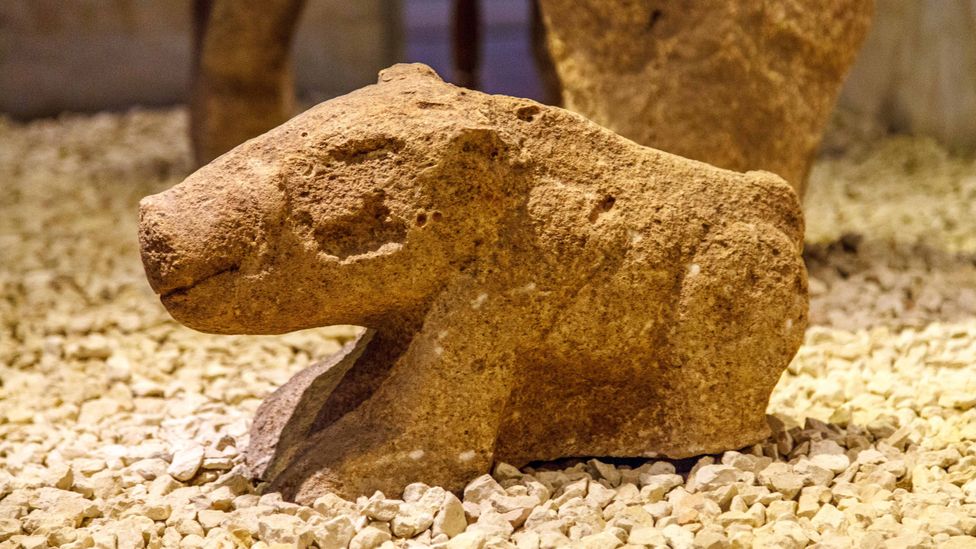 Gobekli Tepe was constructed more than 11,000 years ago, right on the cusp between a world of hunter-gatherers and a world of farmers (Credit: Giulio Ercolani/Alamy)

Schmidt, who died in 2014, didn’t live to see the site’s transformation from dusty mountaintop dig to major tourist attraction. But his discoveries there spurred global interest in the Neolithic transition – and in the last few years, new discoveries at Gobekli Tepe and closer looks at the results of earlier excavations are upending Schmidt’s initial interpretations of the site itself.

Work on foundations needed to support the site’s swooping fabric canopy required archaeologists to dig deeper that Schmidt ever had. Under the direction of Schmidt’s successor, Lee Clare, a German Archaeological Institute team dug several “keyhole” trenches down to the site’s bedrock, several metres below the floors of the large buildings. “We had a unique chance,” Clare said, “to go look in the lowest layers and deposits of the site.”

What Clare and his colleagues found may rewrite prehistory yet again. The digs revealed evidence of houses and year-round settlement, suggesting that Gobekli Tepe wasn’t an isolated temple visited on special occasions but a rather a thriving village with large special buildings at its centre.

The team also identified a large cistern and channels for collecting rainwater, key to supporting a settlement on the dry mountaintop, and thousands of grinding tools for processing grain for cooking porridge and brewing beer. “Gobekli Tepe is still a unique, special site, but the new insights fit better with what we know from other sites,” Clare said. “It was a fully-fledged settlement with permanent occupation. It’s changed our whole understanding of the site.”

Meanwhile, Turkish archaeologists working in the rugged countryside around Urfa have identified at least a dozen other hill-top sites with similar – if smaller – T-pillars, dating from around the same time period. “It’s not a unique temple,” said Austrian Archaeological Institute researcher Barbara Horejs, an expert on the Neolithic who was not part of the recent research efforts. “That makes the story much more interesting and exciting.” Turkish Culture and Tourism Minister Mehmet Nuri Ersoy went as far as saying that this area could be referred to as the “pyramids of south-east Turkey“. 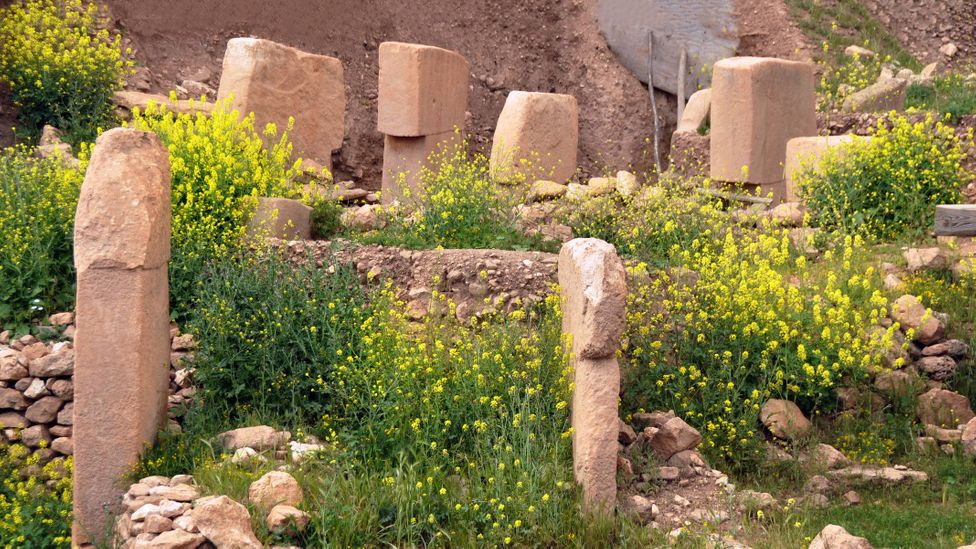 Rather than a centuries-long building project inspiring the transition to farming, Clare and others now think Gobekli Tepe was an attempt by hunter-gatherers clinging to their vanishing lifestyle as the world changed around them. Evidence from the surrounding region shows people at other sites were experimenting with domesticated animals and plants – a trend the people of “Belly Hill” might have been resisting.

Clare argues the site’s stone carvings are an important clue. Elaborate carvings of foxes, leopards, serpents and vultures covering Gobekli Tepe’s pillars and walls “aren’t animals you see every day,” he said. “They’re more than just pictures, they’re narratives, which are very important in keeping groups together and creating a shared identity.”

When I first wandered across the site more than 15 years ago, I remember a feeling of great distance. Gobekli Tepe was built 6,000 years before Stonehenge, and the exact meaning of its carvings – like the world the people there once inhabited – is impossible to fathom.

That, of course, is part of the Gobekli Tepe’s tremendous magnetism. As thousands of visitors marvel at a place most people had never heard of a decade ago, researchers will continue trying to understand why it was built in the first place. And each new discovery promises to change what we now know about the site and the story of human civilisation.

“The new work isn’t destroying Klaus Schmidt’s thesis; it stands on his shoulders,” said Horejs. “There’s been a huge gain of knowledge, in my view. The interpretation is changing, but that’s what science is about.”