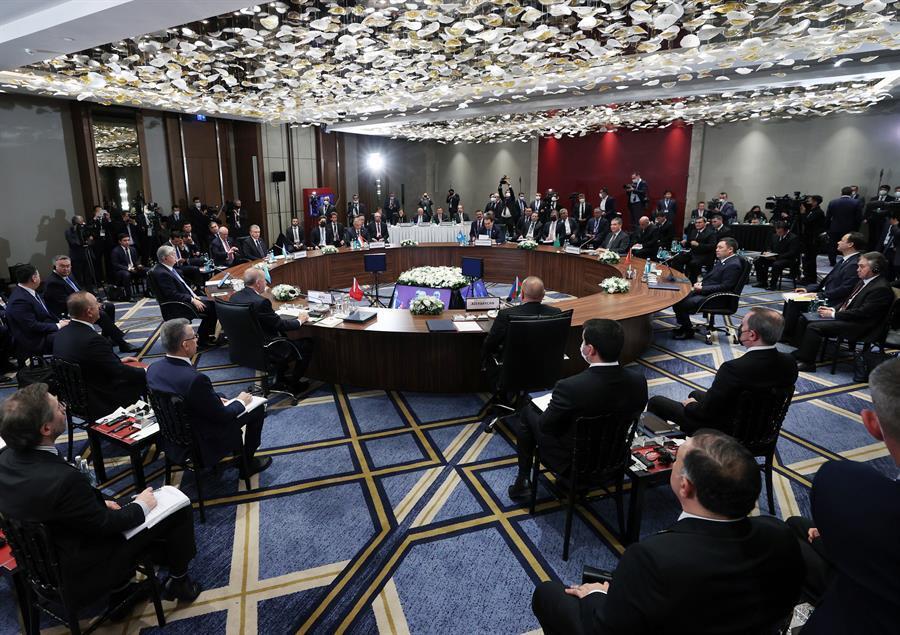 The name of the Cooperation Council of Turkic Speaking States (Turkic Council) has been changed to the Organization of Turkic States, according to a joint declaration of the Council’s 8th Summit in Istanbul.https://4b37740708cf8099fc407cc9aa4c09b1.safeframe.googlesyndication.com/safeframe/1-0-38/html/container.html

The declaration was issued following the summit held on the Democracy and Freedoms Island in the Sea of Marmara under the theme “Green Technologies and Smart Cities in the Digital Age.”

“Turkish World 2040 Vision” initiated by the council’s honorary chairman, Nursultan Nazarbayev, is accepted as a strategic document that will guide future cooperation in various fields where the Turkic states have common
interests,” it said.

Also, instructions were given to prepare the “Strategic Roadmap of the Organization of Turkic States 2022-2026” for the implementation of the document.

Turkmenistan joined the Organization of Turkic States as an observer country and that would improve the solidarity and cooperation between the Turkic States and their peoples, the declaration emphasized.

It also praised Turkey for allocating its historical building in the Sultanahmet district in Istanbul to the council’s general secretariat office.

Azerbaijan was congratulated for its victory of the liberation of a key city in the Nagorno-Karabakh region and the normalization of relations between Armenia and Azerbaijan was supported, it said.

The declaration underlined that a fair, permanent, sustainable and mutually acceptable solution to the issue of Cyprus should be reached based on facts on the island.

Regarding violence that erupted April 28 between Tajikistan and Kyrgyzstan, centered on control of a local water distribution network, the declaration welcomed dialogue between Kyrgyzstan and Tajikistan.

And it was decided to develop cooperation to fight terrorism, extremism, separatism, racism, discrimination, xenophobia, Islamophobia and all forms of hate speech and to coordinate efforts in these areas in the international arena.

Highlighting the importance of necessary measures to facilitate mutual trade and investment, the declaration said the aim of creating favorable conditions among member states was adhered to and relevant authorities were instructed to follow up the decisions made.

The initiation has been started to establish a Turkish Trade Houses to increase trade, export potential and investments between member and observer states.https://4b37740708cf8099fc407cc9aa4c09b1.safeframe.googlesyndication.com/safeframe/1-0-38/html/container.html

The importance of the implementation of the memorandum of understanding among member states of the Organization of Turkic States on the sharing of knowledge and experience between various economic zones was emphasized.

To reduce the effects of natural disasters and contribute to recovery, it was instructed to start an initiation on the establishment of a disaster response unit, The Organization of Turkic States Civil Protection Mechanism, to carry out joint search, rescue and rehabilitation efforts.

Additionally, Turkey’s Directorate of Communications was congratulated for hosting the successful organization of the three-day media forum in Istanbul last month.https://4b37740708cf8099fc407cc9aa4c09b1.safeframe.googlesyndication.com/safeframe/1-0-38/html/container.html

The declaration, which includes 121 articles, was signed in the Kazakh, Kyrgyz, Turkish, Uzbek and Azerbaijani languages.

The Organization of Turkic States was formed in 2009 to promote cooperation among Turkic-speaking states. It consists of Azerbaijan, Kazakhstan, Kyrgyzstan, Turkey and Uzbekistan as member countries, and Hungary and Turkmenistan as observer states.