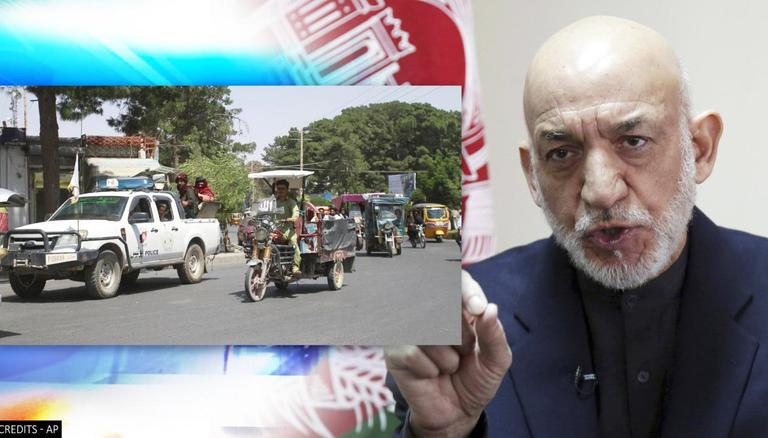 As the Taliban took total control of Afghanistan and its military power forcing government officials, including President Ashraf Ghani, to resign and flee the country, an undeterred former president Abdul Hamid Karzai said he will not leave Kabul under any circumstance.

According to TOLO News, former Afghan President Hamid Karzai assured the people in a message that he will stay in the country even as a ‘peaceful’ transfer of power takes place in Kabul, following Ghani’s resignation. Karzai urged people to stay in their homes, stating that he was working to resolve issues with the militant group through dialogue. Karzai has formed a transition Council with Abdullah Abdullah and Gulbuddin Hekmatyar.

The ex-President’s message comes at a time when Afghanistan’s local residents have begun fleeing the country to take shelter in neighbouring nations after the Ashraf Ghani-led government surrendered on Sunday. Bringing the country and its government to its knees, the terrorists have forcefully claimed every region of Afghanistan. READ | Afghanistan President Ashraf Ghani & Amrullah Saleh flee Kabul after Taliban takeover

As per local news agencies, President Asraf Ghani has officially resigned from his post amid the Taliban takeover and is now headed to Tajikistan to take refuge. From there on, he will head to another country seeking protection. Despite the circumstances, Vice President Amrullah Saleh has said he “will never, ever and under no circumstances bow to the Taliban.”READ | India monitoring Afghanistan situation; Plane with 129 onboard departs Kabul for Delhi

“I will never betray the soul and the legacy of my hero Ahmad Shah Masoud, the commander, the legend and the guide. I won’t disappoint millions who listened to me. I will never be under one ceiling with the Taliban. NEVER,” he wrote on Twitter.

The tweet comes amid reports that he and President Ashraf Ghani have fled Kabul as the Taliban captured almost all of Afghanistan earlier today. Earlier in the day, Afghanistan’s Acting Interior Minister Abdul Sattar Mirzakwal announced that Kabul will not be attacked by the Taliban and that the transition will happen peacefully, confirming the government’s surrender. He assured residents that security forces will ensure the security of the city.READ | Afghanistan Defence Min asks citizens not to ‘panic’, dubs Kabul ‘safe’ despite surrender

The new Afghanistan government will reportedly be led by top Taliban leader Mullah Abdul Ghani Baradar. As per sources, Mullah Baradar has the support of Qatar, which has been helping the Taliban and Afghan govt negotiate.