Today, some of the world’s financiers come to believe that it is necessary to return to the gold standard. This is how the monetary system is called when the currencies of the states are pegged to gold. This idea wants to “cure” the global crisis. Economists consider such a proposal differently: some of them consider the gold dinar to be a hopeless idea, others try to implement it.

The idea of ​​creating a currency of Muslim countries that would be supported by gold is not new. It was also mentioned by the Koran: it advises Muslims to use this money both during transactions, as savings, and for paying taxes.

The Koran forbids usury, and most followers of this scripture believe that paper notes are not money. This led to the fact that Islamic banking is a special system where the dominant role is assigned to the Islamic Development Bank. It was created by 55 eastern countries in which the main raw material resources of the planet are concentrated. The economy of these Muslim countries is growing rapidly, but it is very dependent on the US dollar. If the gold dinar were introduced, the dependency would weaken. The dinar rate would be higher than the cost of one dollar. That is, in this case, in addition to the economic, there is also a political background.

OPPONENTS AND SUPPORTERS OF THE GOLD STANDARD

Some economists (opponents) believe that there is a limited supply of gold in the world. And if the volume of the gold standard is equal to the stock of this metal, it will restrain the growth of production. The level of production of the “yellow” metal is lower than the pace of the economy, and its reserves are unevenly distributed throughout the world. The movement of capital, by contrast, is much freer than before.

Proponents believe that the gold currency will help stabilize the economy, reduce inflation, because in this case the state will not at its own discretion emit bills that are not secured by a precious metal.

THE CONCEPT OF STANDARD GOLD

The gold standard is the monetary system when the limited amount of gold is the main means of settlement. In this case, a guarantee is given that the currency is exchanged for the same amount of gold. States for settlements with each other set the exchange rate calculated on the ratio of their national currencies to gold (to one unit of weight).

THE ORIGINS OF THE STANDARD

It is known about the existence of several types of gold standard:

The first is the classic (gold coin): the money system was based on gold coins. Along with this, banknotes were issued, which changed into coins at the established rate written on these banknotes. This system worked until World War I began.

Next came the standard gold bars. The notes could be exchanged for a 12.5 kg gold bar. The course of the dinar against the ruble was not yet precisely determined.

The third type: gold exchange. Appeared at the end of the Second World War. Its foundations were laid in Bretton Woods: America pledged to ensure the exchange of gold at the rate of $ 35 for 31.1035 grams (troy ounce). Only the states, using their central banks, had the right to change the American currency into gold. In August 1971, these operations were suspended due to inconsistencies in the actual value of the American currency regarding gold. A year later, this standard was abolished altogether.

Two decades later, the world once again began to talk about the revival of the exchange of currencies for gold. Then offered to enter the gold dinar.

Why exactly dinar? Most Islamic states export oil and other natural resources. Commodity exchanges around the world are trading in US currency, so countries pay for their raw materials in US dollars or in the form of numbers on accounts. In fact, such figures are not provided with anything, therefore they are very unreliable.

This prompted the eastern countries to take a step towards reducing their dependence on the dollar. In 2002, it was proposed to introduce the golden Islamic dinar as an international currency. It was not intended to use it in daily calculations. Essence – the reserves of this currency would be in the central banks of the states that would be participants in this system.

The currency of the Islamic state assumed the use of a netting system. The foundation of the latter is bilateral contracts between the parties to the agreement. This would nullify the issue of the lack of gold for the release of coins. 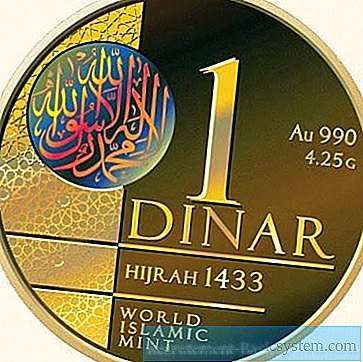 The idea was as follows: the precious metal was exchanged for natural resources. The main energy exporters are Turkey, the United Arab Emirates, Indonesia, Saudi Arabia, and Malaysia. If gold dinar were introduced, these countries would greatly benefit, since they would receive up to 20 tons of gold annually.

Despite the freezing of the project in 2003, in Malaysia, in one of the states, a dinar was minted – a coin that was declared a legal currency along with the national one. But the federal government did not support such an initiative.

THE IDEA IS IN THE AIR

Since that time, the idea of ​​an Islamic currency began to be realized. The company was opened E-dinar Ltd, whose headquarters is in Malaysia.

This company is nothing more than a bank that provides the opportunity to transfer your money into dinars, however, electronic. The weight of a gold dinar is 4.25 grams of gold. With the help of this bank, funds are transferred to dinars, the necessary calculations are made, then you can reverse the conversion.

Users open accounts for free, you just need to register and fill out a form on the site. The company’s vaults contain such a reserve of gold bullion, which will cover the requirements of all those who have electronic dinars. For the first few years, the company registered three hundred thousand accounts opened by customers from all over the world. In addition to the already mentioned E-dinar, there is an E-Dirham in the system, equal to three grams of silver.

THE SPREAD OF GOLD CURRENCY

The end of 2001 was marked by the official ceremony of introducing gold and silver currencies into circulation. Coins are distributed through specially registered companies. In the offshore of the Emirates and Malaysia, gold dinar is already in circulation.

As expected, the common currency of the Islamic states will be introduced before the beginning of 2011. However, this did not happen. The date of introducing the gold standard into circulation was postponed to the beginning of 2015. But even then it did not happen. As expected, the head office of the Central Bank of this currency will be located in Riyadh, the capital of Saudi Arabia.

Talks about the gold dinar re-emerged after the crisis in 2008. However, the Russian Federation does not develop this theme, despite the fact that the emergence of such a currency may adversely affect the country’s economy. Practically all reserves are kept by our Central Bank in American and European currencies. As a result, the very appearance and course of the dinar will have a very negative impact on the financial stability of our country.

The whole world is still dependent on the dollar. Along with him and Russia, holding more than half of its reserves in US currency. To date, no one sees the alternative.

THE AFFAIRS OF THE MODERN WORLD

In mid-2015, the press began to spread again the information that they wanted to reintroduce gold coins in the territory of one of the Islamic states. The price of each will be $ 139.

Most economists agree that this is an attempt to demonstrate the seriousness of intentions. But there is nothing connected with reality. Experts believe this is a failure option, because it is supposed to put into circulation the money, the cost of which has a hard peg to gold. It turns out that certain reserves are needed. Returning to a gold dinar is very expensive.

On the other hand, it is important that there will be a paper currency that will receive gold reinforcement. Since the volume of trade within the Islamic state is small, it will take a little gold to secure the coins. Then the attempt to revive the dinar is realizable.

Today, anyone can release their own gold dinars, having gold, a 3D printer and a layout that is sent by email to anyone. However, whether it is worth it is not at all clear.

This explains the fact that in 2015 the Central Bank actively bought gold, since it is this precious metal that will support the new type of national currency – the gold ruble.

The State Duma wants to change the ruble to another national currency in order to stabilize trading on the international market. To balance the rate and reduce the level of speculation with the ruble between the member countries of the SCO, the EAEU, the BRICS, it is proposed to introduce the gold ruble into circulation. He will be able to stabilize the exchange rate of the national currency when converting with the euro and the dollar. It is also expected that this currency minimizes the level of speculative actions with these and other foreign currencies.

According to the deputies, the transition to a new currency will be the beginning of an important period, which in the end will have a favorable effect on the Russian economy. An example is the single currency of European countries.

For the new currency of Russia to appear, it is necessary to amend the Constitution. In addition to the gold ruble, it was proposed to use the yuan as a settlement between the countries.

As everyone remembers, from mid-2014, the ruble exchange rate began to actively fall. The President of the country then ordered the government to develop measures to strengthen the national currency, the weakening of which was caused by speculative actions.

Muammar Gaddafi was the last president who wanted to give up the US currency as the main one in settlements between countries. He was actively working in this direction – he tried to put into circulation a gold dinar. Unfortunately, Gaddafi could not realize his ideas.

Gold coins, the price of which will be provided with gold, will most likely lead to the collapse of the economic system of the United States. However, today it’s too early to talk about it: there is still no alternative to the dollar.

For a long time, the main currency in settlements between states was the US dollar. The new millennium was marked by the emergence of a new currency – the euro. The European currency quickly took the place of the Second World War. The emergence of a completely new unit of currency, which will have a different circulation technology and philosophy, will force the “old people” to leave their leading positions.

Taking into account the ability of Muslim countries to control prices on the world market of raw materials, the transition to the golden dinar of Islamic states (participants of the Islamic Development Bank) will become a serious threat to the collapse of the currencies prevailing today.