Life after 370: Beyond the silence of Kashmir Valley

Beneath the uneasy calm in Kashmir Valley after the abrogation of Article 370, people are shocked and angry. The real challenge for the government will begin when restrictions are eased. 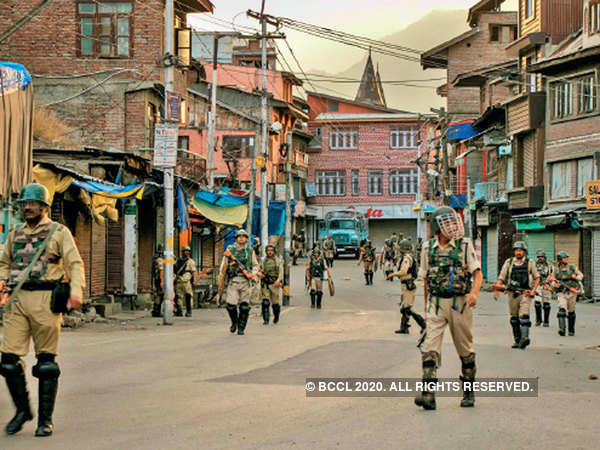 On the boulevard along Srinagar’s Dal lake, there is silence. Barring the horns and screeches of a few vehicles that are on the road with special permission, there’s emptiness. Tourists, both Indian and foreign, have departed. Houseboats are vacant. The boatmen are sleeping or sitting idly on their shikaras.

Mohammed Iqbal, a shepherd from Sonmarg, landed in Srinagar on Monday morning with a few companions: 50 sheep, a big goat and a helper.“I came to Srinagar to sell my sheep. But curfew began the day I reached. Now, I am worried. I don’t know if the situation will improve at all even after the restrictions are lifted. Maybe, I should return to my village,” Iqbal says in despair. If he does return to the village with the animals, that would mean zero business before Eid and a weeklong walk to Sonmarg, about 95 km north of Srinagar.

There’s something else he is worried about. “Hum log se dapha 370 cheen liya gaya hain (Article 370 has been snatched from us),” he says loudly, almost like a slogan, as a few passers-by turn to look.

The shepherd from Sonmarg may not be able to articulate the nitty-gritty of the controversy and its precise fallout on him and other Kashmiris. But he is sure that this time they are staring at something far bigger than what they faced after Burhan Wani’s killing.

Wani, a homegrown Hizbul Mujahideen terrorist and poster boy of Kashmir militancy, was eliminated in July 2016, triggering massive protests, stone-pelting and a virtual shutdown of the Valley for at least three long months. Iqbal says: “Dapha 370 kaafi lamba khisega (The trouble over Article 370 will last longer).”

Over the past week, the Narendra Modi government revoked Jammu and Kashmir’s special status embedded in Article 370 of the Indian Constitution and bifurcated the state into two Union territories — Jammu and Kashmir with a legislature and Ladakh without one — upsetting the majority of its residents.

Since then, the Valley has remained peaceful mainly due to enhanced security measures and a massive deployment of troops. Section 144 of the Criminal Procedure Code (CrPC) has been in force since the night of August 4, prohibiting assembly of more than four persons. The restrictions on the ground seemed like a well-enforced lockdown. In several dozen locations across the city, roads are blocked for vehicular traffic. In some pockets, pedestrian movement is restrained as well. Srinagar is now a city of barricades.

At the time of filing this report, only a few incidents of stone pelting have been reported from the city. I saw broken bricks only on one road — at a tri-junction between the airport and downtown.

Beneath the uneasy calm in Srinagar, people are shocked and angry. Between Wednesday and Friday, ET Magazine visited Lal Chowk, Rajbagh, Dal Lake, Jawahar Nagar Colony, Batmaloo, among others, to understand the ground situation. Moving from one place to another is a nightmare. For the locals, the challenges include managing their daily rations and bringing patients to hospitals. A large number of ambulances are on the roads, but with telephone lines down, the ambulance helplines are not working. At Dalgate junction, the CRPF personnel, however, seem to be sympathetic to those who say they have a medical emergency.

I saw women and the elderly being allowed to move even if they are not carrying a curfew pass. For tourists, most of whom had left by Monday, security personnel check air tickets.

People are angry mainly on two counts. One, they feel their decades-long privileges were undemocratically and unceremoniously curtailed. Two, they are distraught by a total communication blackout for most part of the past week, with mobile phones, landline, internet and other messaging tools not working in the Valley. DTH television and radio are functional, though, and there’s no major power cut.

Limited text message facilities, though irregular, are also available in certain post-paid telephone connections. For example, Pawan Kumar from Lucknow, who works as a chef in a Srinagar hotel, says he has been contacting his family through texts since Sunday on Reliance Jio. “One of my family members purchased an air ticket for me and texted me the PNR details. I am taking an Air Asia flight to Delhi today (Friday),” says Kumar. Like him, there are tens of thousands of migrants in Kashmir Valley. They work in roadbuilding, real estate and hospitality. By August 9, most of them had returned home.

For tourism-dependent local entrepreneurs, it’s a huge blow. This is peak summer season. “Our hotel had bookings worth Rs 30-35 lakh. All those were cancelled. Now, there is zero business for us. The curfew may go on for longer than what we expected. But that’s only a minor concern. Our real loss is that Article 370 has been snatched away from us,” says Danish Farooq, 27, owner of Hotel Paradise located near Dal. Others echo similar sentiments, saying they are willing to sacrifice their business to protect their self-esteem.

This is precisely the challenge confronting the government and why it needs to tread carefully. 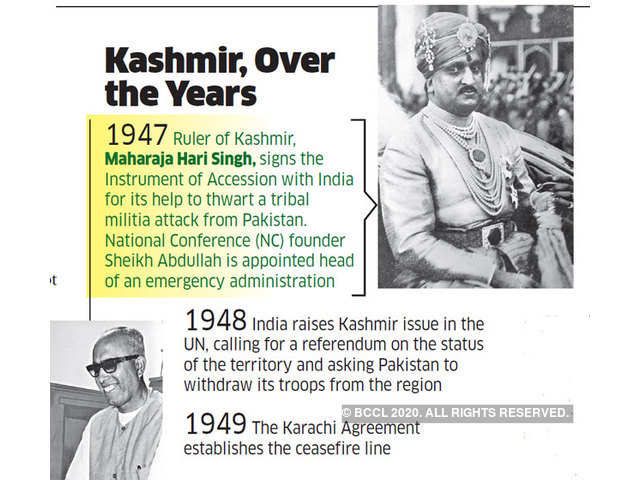 In the past, Kashmir’s mainstream political leaders played a pivotal role in winning back sections of those who got alienated. Today, they are under detention. About 300 political leaders, including two former chief ministers — Omar Abdullah of the National Conference (NC) and Mehbooba Mufti of the Peoples Democratic Party (PDP) — are either under house arrest or detained in guest houses.

In an interview to Press Trust of India earlier this week, J&K top cop Dilbagh Singh said situation in the Valley was peaceful with no untoward incident. On Wednesday, the government released a video of National Security Adviser Ajit Doval sharing a meal with a few people of Shopian on the roadside, arguably the worst terrorist-hit district in Kashmir, giving an impression that things are gradually becoming normal. No doubt, Doval’s presence in the trouble-torn pockets of J&K has helped the government machinery handle the critical situation, apart from boosting the morale of security forces, especially the CRPF personnel, who mostly man the Valley. But to assume that peace has returned to the Valley is fallacious.

In Rajbagh, a group of 20 young men stops me from taking photographs of vendors selling apples, saying the “Indian media” is trying to create a false narrative about the Valley limping back to normality. One tall man in his 20s starts shouting, attempting even to grab my camera before others intervene. The group checks the recent photos in the camera, one by one. They calm down only when two photographs of apple vendors wooing customers are deleted. The incident, however, terrifies my driver so much that he refuses to go any further than dropping me straight to the hotel.

In the middle of a silent city, a handful of shops are open, selling mainly essential commodities. In Rajbagh, for example, Sarwan Hakum, 30, is buying apples. Hakum, who has a crockery business in nearby Budgam town, is accompanied by his wife.

There’s 55-year-old vegetable vendor Ali Mohammad. He doesn’t have to go through police checkpoints in the city as he has a country boat to ferry his vegetables from his farm. “Curfew or no curfew, I have been selling vegetables every day,” he says, adding that prices are only marginally higher due to lockdown. Mohammad is selling tomatoes for Rs 30 a kilo and cabbages for Rs 20. “Gourd is Rs 20 a piece, no matter the size,” he says. Not far from Mohammad’s makeshift shop, two elderly women are selling fish. Both decline to talk. With the Centre taking drastic and dramatic steps on Kashmir, upsetting even the mainstream political leaders in the Valley, the question is, how would it gear up to face multiple challenges that include security and diplomacy?

In New Delhi, AS Dulat, former chief of India’s external spy agency Research & Analysis Wing (R&AW), tells ET Magazine that the intelligence agencies now need to be more alert. He says: “My apprehension is, and I hope I am wrong, the recent steps in Kashmir will only increase violence. I don’t think anything major will happen in 10-15 days. But these measures have made the rest of India more vulnerable. The intelligence agencies have to be highly alert to spot where, when and how that violence may occur.” Dulat, who was also an adviser on Kashmir to former prime minister Atal Bihari Vajpayee, adds that Vajpayee wouldn’t have done something like this. “Vajpayee was worshipped in Kashmir. He is still worshipped in Kashmir. Vajpayee wouldn’t have abrogated Article 370 or divided J&K into two,” says Dulat.

In an address to the nation on Thursday night, Prime Minister Narendra Modi reached out to Kashmiris by promising more schemes and jobs, adding that he would give Jammu & Kashmir full statehood once situation improves, indicating that the Union territory status is only temporary. He further elaborated on how 42,000 people have lost their lives in Kashmir since Independence, reminding everyone that measures adopted so far have not yielded the desired results. The PM’s speech also hinted that there could be some relaxation on restrictions so that Kashmiris can peacefully celebrate Eid on Monday — 97% of people in the Valley are Muslims.

However, for most people in Kashmir Valley, 370 is not just a number. They say it’s their identity. The challenge from now on for the government is, what can replace it? What solution and what scheme can substitute that?