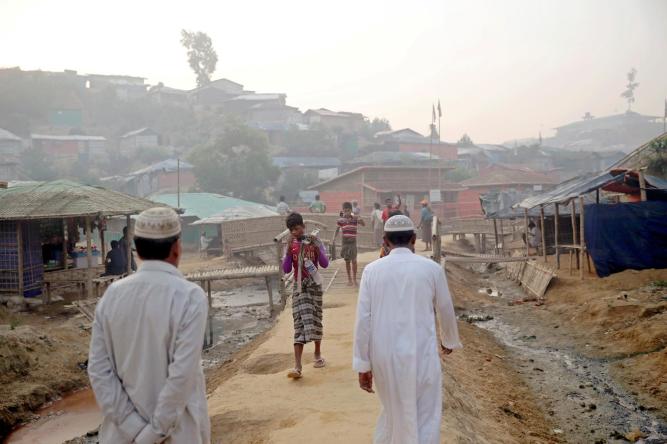 The International Court of Justice genocide suit against Myanmar on behalf of the Rohingya, which was initiated by The Gambia, is garnering increasing support from other nations around the world. An unexpected but very welcome development in recent days was that Bangladesh has become one of those nations.

At last week’s summit of the Organization of Islamic Cooperation in Niger, the government of Bangladesh donated $500,000 to The Gambia’s legal effort on behalf of the Rohingya — a move that surprised many observers, but which is a good sign of how Dhaka’s position on the Rohingya situation is evolving.
Bangladesh has taken in more than 1 million Rohingya refugees who fled the Myanmar army’s “clearance operations” against their villages in Rakhine state in the 2016-17 period, plus hundreds of thousands more from previous decades and tens of thousands of new incomers since the height of the crisis. Though the refugee camps in Bangladesh are secluded and relatively poorly provisioned, Bangladesh has done extremely well for a country of its limited means to take in and give refuge and safety to a people fleeing genocide. Its humane response to this refugee crisis puts to shame the response of most Western countries in recent years.

But one of the more disappointing aspects of its handling of the situation was that, up until now, it seemed committed to keeping good relations with the government of Myanmar that carried out the genocide against the Rohingya in the misguided hope that it could eventually return the refugees to their ancestral lands. The Bangladeshi authorities had refrained from strong criticism of Myanmar and put a lot of time and effort into negotiating for the return of the refugees.

After some three years of negotiations and successfully signed agreements, however, it seems that the government of Bangladesh finally understands that Myanmar has not been negotiating in good faith and has no intention of honoring any of its side of the deal. After spending half a century trying to expel the Rohingya from the country of their birth, the authorities in Myanmar were not about to undo all of that work just because the leaders of Bangladesh were asking nicely. So now it appears that Dhaka has accepted the reality that bilateral negotiations with Myanmar will not yield any fruit and is instead shifting its focus to supporting international legal efforts to force justice upon Myanmar for its crimes against humanity.

This is also a very good sign for the well-being of the Rohingya in the short to medium term. So long as Dhaka was pursuing its bilateral negotiations with Myanmar, it could pretend, or perhaps they could try to persuade themselves, that the refugee situation in Cox’s Bazar was a short-term problem that would soon be resolved. And this left the Rohingya in something of a limbo, while the Bangladeshi authorities were trying to keep the refugee population isolated from the indigenous people of Bangladesh.

It appears that Dhaka has accepted the reality that bilateral negotiations with Myanmar will not yield any fruit.

But now that the reality of the situation has sunk in and that Dhaka has seemingly given up its faith in its counterparts in Myanmar, it surely understands that the Rohingya will remain in Cox’s Bazar in large numbers for a long, long time. Even if the international community does eventually manage to get the Rohingya back to their ancestral homelands, it is going to be a very long and arduous process — it may take at least a generation or two.
So now the rational calculation for Bangladesh on the best way to interact with the million-plus Rohingya refugee population must surely change. This means that more infrastructure will have to be built around Cox’s Bazar to sustain the large population; it means economic activity will have to be encouraged in the camps so as to slowly evolve them into a proper city; and it means it would be beneficial for economic relationships between the camps and the rest of the country to develop, so that the Rohingya people become an increasingly self-sufficient community and even actively contribute to Bangladesh. If they will be allowed to, the Rohingya can become an asset to Bangladesh. And what better way for the Rohingya to thank their hosts for their kindness and humanity?

Dr. Azeem Ibrahim is a director at the Center for Global Policy in Washington, DC. Twitter: @AzeemIbrahim