Ersin Tatar’s victory and its impact on Turkish geopolitics 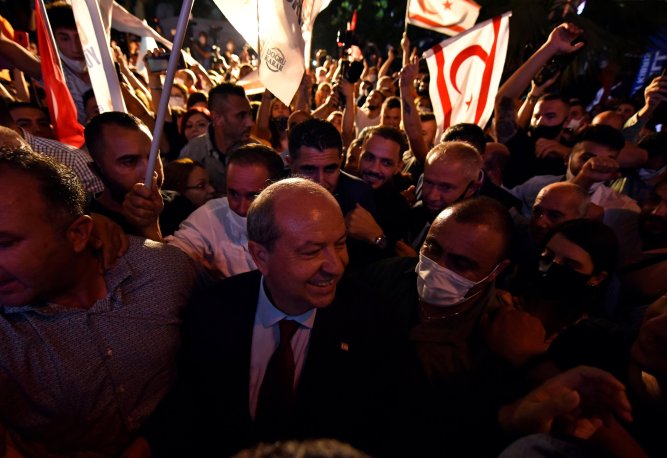 On Oct. 18, (also Azerbaijan’s Independence Day), Ersin Tatar won the presidential elections in the Turkish Republic of Northern Cyprus (TRNC). Unsurprisingly, the international press immediately had something to say, and that was to express their discontent with the result.

Tatar won the second round of the elections with 51.74% of the votes against his rival, still incumbent President Mustafa Akıncı and became the fifth president of the TRNC. Among some German media circles, the victory was described as belonging to President Recep Tayyip Erdoğan given that Tatar was openly supported by Ankara during the election process.

Although Akıncı ran as an independent candidate, he was supported by the West, so any success he achieved depended on the West. Throughout his time as the president of the TRNC, Akıncı was a controversial president, perhaps the second most controversial one after Mehmet Ali Talat, the second TRNC president, who had pursued a rigid anti-Turkey policy during his time in office.

On many occasions, Talat attempted to halt Turkey’s negotiation efforts for the Cyprus issue. He even tried to replace 40,000 Turkish soldiers who had been stationed in the TRNC during Turkey’s 1974 peace operation to stop the genocide of Turks on the island.

One of Akıncı’s most controversial acts was when he presented an illegal map to the United Nations showing the TRNC’s important areas to be ceded to the Greek Cypriot administration.

The areas that Akıncı proposed to be handed over to Greek Cyprus are vital to the Turkish community on the island in terms of agriculture and economy. The touristic hot spot Varosha (Maraş), which was recently reopened to the public, the agriculturally rich Güzelyurt (Morphou) and geopolitical significant Dipkarpaz (Rizokarpaso) are among the areas he had proposed, echoing the Annan Plan.

By taking such a step, Akıncı tried to weaken Turkey’s guarantorship by preventing it from having a say in the island’s affairs and to diminish the Turkish community’s economic, political and military power, despite the international law recognizing Turkey’s freedom to act in the region.

Why Akıncı acts that way

In 1974, Turkey saved the lives of Turkish Cypriots from genocide, and today, it continues its efforts to protect the rights of the Turkish Cypriot people.

Although it is deemed illegal under international law and contradicts the Copenhagen Acquis Communautaire criterion and the constitution of Greek Cyprus, the EU hypocritically accepted a de facto divided island in 2004. That happened due to Greece’s pressure at the Helsinki Summit in 1999.

It is noteworthy to mention that during a referendum the same year that asked them whether to reunite with the Turkish side, Greek Cypriots voted against reunification, which brought more advantages for them than for the Turks.

In contrast, 65% of the Turkish side voted “Yes” in the referendum, even though the Annan Plan would have driven the TRNC to ruins in the long run.

The reason for this is that in the new state system, the assimilation of the Turks was particularly simplified so that in the medium term, the integral Republic of Cyprus would have been wholly “Hellenized.”

Even today, the Hellenization idea of Cyprus exists and has a fundamental core presence in the society of Greek Cyprus. The Hellenization idea was the reason behind Turkey’s 1974 operation (which was legally recognized by the European Council’s Resolution 573/1974) that followed an attempted military coup in Lefkoşa in the same year.

The Greek Cypriot administration attempted to implement the Enosis (the annexation of Cyprus to Greece), which was a campaign the EOKA terrorist group sought to achieve for years by systematically eliminating the Turks.

How do we know that the idea is still deeply rooted today in Greek Cyprus? The answer is simple. Turkish flags are set on fire, slogans such as “You will leave the island dying” are chanted, and mass protesters march to the TRNC border to burn everything down in almost every demonstration.

To make matters worse, some Greek Cypriot politicians claim that they do not even want to share a hospital with the island’s Turks, some of whom still live in the south of the island.

The Greek Cypriot administration recently granted the United States and France the right to establish a military base on the island, which threatens more destabilization in the entire region. Together with the EU, according to the controversial Sevilla map, it is trying to corner Turkey – a country which has the longest coastline in the Eastern Mediterranean. As a center-oriented politician, Tatar’s election victory sent shockwaves across the EU and the Greek Cypriot administration.

When taking into consideration these facts, the question arises as to what extent a reunification makes sense.

Apparently, the Greek Cypriots and the EU are pursuing double standards regarding the Cyprus question. The EU knows very well that the TRNC is an independent state with a functioning bureaucracy and democratic institutions, whose only internationally recognized representative is the president himself.

A negotiation initiative in Beirut in 1968 faced the Greek side’s maximalist demands that aim to expose Turks to 50 years of unnecessary settlement discussions and only offered a federal-state solution.

Tatar’s victory will therefore open a new chapter for the Cyprus issue and undoubtedly strengthen the Turkish side’s hand in pleading for a two-state solution, instead of settling for a federal state.

EU’s role in the crisis

The EU has not yet made a significant contribution to the Cyprus conflict, even if the U.K. and Greece, together with Turkey, have guarantor power status over Cyprus.

On the one hand, however, the EU has offered the Turks the prospect of EU membership after reunification. On the other hand, under pressure from Greece, it has lifted the preliminary conditions of the island’s reunification for full membership at the Helsinki Summit in 1999.

The EU only pursued ideological and religious values upon accession. The Turks have so far remained internationally isolated despite their approval of the Annan solution, which would have harmed them in the long run.

In contrast to the Annan Plan, Turkey can no longer, especially amid the ongoing gas dispute, lose its influence in the TRNC within a federal solution framework.

Since the Greek Cypriot administration has allowed the U.S. and France to deploy military troops and two British bases continue to exist there, Turkey can and must guarantee its security by establishing a navy and an air force base in the north. The developments in the Geçitkale drone airport – which was opposed by Akıncı, was linked to Turkey’s guarantor strategy.

The federal solution allows missiles to be stationed on the Beşparmak Mountains, from which Turkey would easily become a target since it is only 70 kilometers (43.5 miles) from the northern part of the island. This is one of the reasons why former British Prime Minister Benjamin Disraeli in the 19th century called the island the key to the Middle East and endorsed the annexation of Cyprus.

Neither Turkey nor the Turkish Cypriots have any more time or lives to lose today. The unification of Turkey and the TRNC is the only solution that would increase the well-being of both.

Otherwise, there is a risk that leaders like Akıncı will take power and once again pursue anti-Turkish policies. Such an identity policy is not uncommon in Cyprus and indeed has a long tradition.

Since the island’s annexation by the British monarchy in the late 19th century, the ideological and cultural distance of the Cypriot Turks from Turkey has been systematically implemented first by Great Britain and then by the Greek Cypriots. Tatar’s victory is therefore significant.

Turkey can now continue to carry out natural gas research in the waters shared with the TRNC under the “Blue Homeland” doctrine and further expand its influence in the Eastern Mediterranean.

In this context, the Turkey-Libya agreement, which no longer allows Turkey to be excluded from gas developments such as the EastMed pipeline or reserves in the Levant Basin, can be seen as the first step. The deal with Libya also invalidated the Sevilla map and ended its existence.

With a new naval base, a chattering line for combat ships, and the foundation of a new independent “Turkish Republic of Cyprus,” Turkey will be even more robust and more proactive in shaping regional politics.

*Master of arts at Friedrich Alexander University in Erlangen, Germany

ABOUT THE AUTHOR
*Doing master’s thesis on the geopolitical and economic facets of the EastMed Pipeline project at the Friedrich Alexander University, Erlangen