Riyadh threatens Dhaka with curbing migration if it fails to adhere to its request, which could be disastrous for Bangladesh’s economy 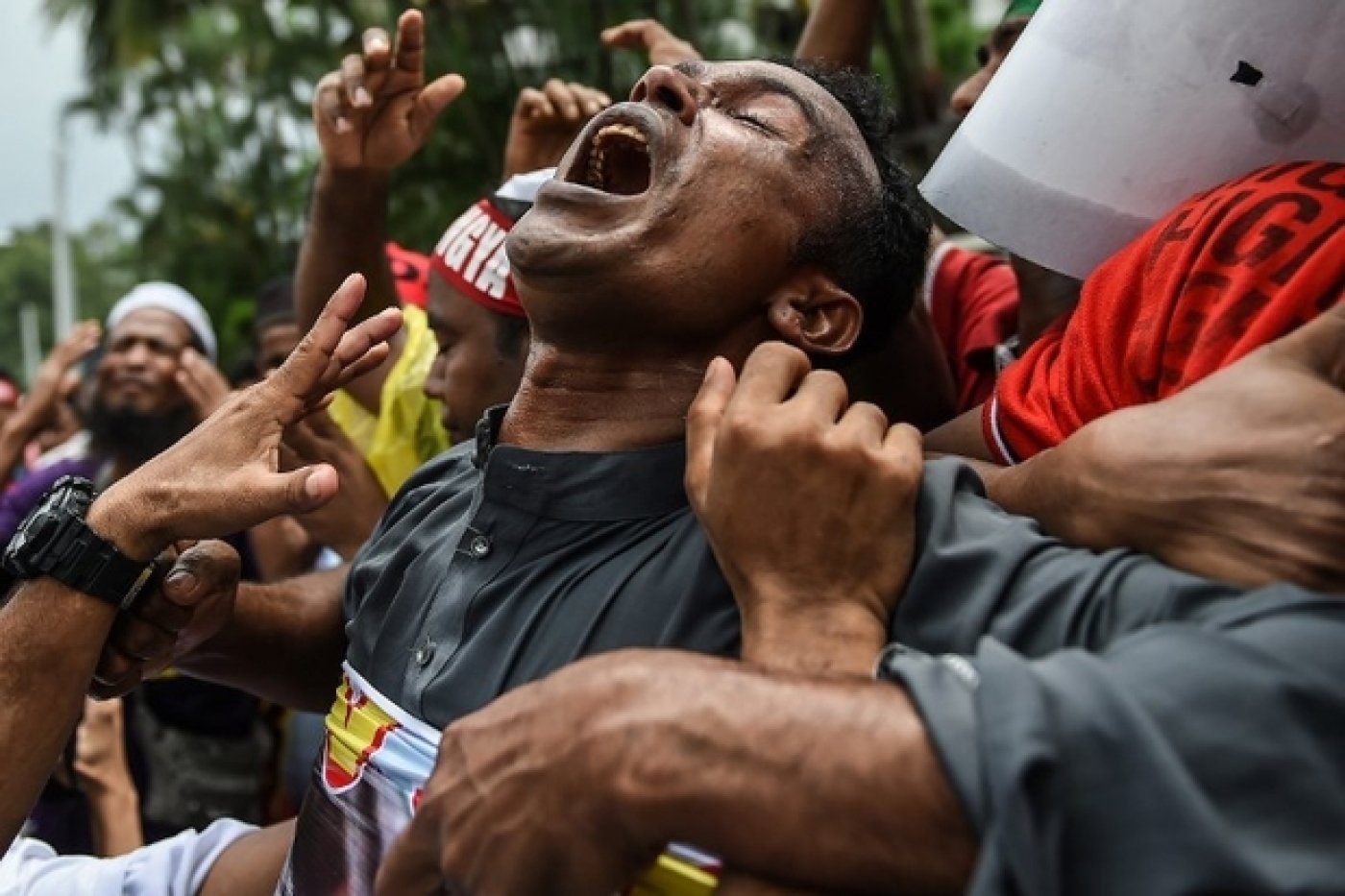 Rohingya refugees living in Malaysia shout slogans during a protest against the treatment of Rohingya Muslims in Myanmar, in Kuala Lumpur on 8 September 2017 (AFP)

Rohingya living in Saudi Arabia are worried that Riyadh will deport them, after the kingdom threatened Bangladesh with a migration ban unless Dhaka gave Bangladeshi passports to members of the persecuted minority.

Last month, Bangladesh’s Foreign Minister AK Abdul Momen confirmed in a Dhaka press conference that Riyadh had made the request for Bangladesh to give Rohingya living in Saudi Arabia Bangladeshi citizenship.

“Many of the refugees have never come to Bangladesh and have no idea about the country. They know Saudi culture and speak the Arabic language,” said Momen.

“They [Saudi Arabia] are not saying that they will send the 54,000 Rohingyas to Bangladesh, but they should be provided with Bangladeshi passports.”

Momen noted that while Bangladesh would not be able to give all Rohingya living in Saudi Arabia passports, it would consider giving Bangladeshi documents to Rohingya who previously had them.

Since 2017, Bangladesh has given refuge to more than a million Rohingya who had fled persecution in neighbouring Myanmar.

Myanmar authorities have repeatedly refused to give Rohingya passports as they do not recognise them as citizens. Many in the community were then forced to obtain fake passports from other countries in order to find work abroad.

Local media also reported that foreign ministry officials said that Riyadh threatened to curb migration from Bangladesh if it failed to accept Saudi Arabia’s request – a move that could have disastrous consequences for Bangladesh’s economy.

Hassan, a Rohingya who has lived in Mecca nearly all his life, went to Saudi Arabia after his family fled Myanmar when he was nine years old.

Refusing to give his last name for safety reasons, Hassan told Middle East Eye that reports in the Bangladeshi media “terrified” many within the Rohingya community.

“We hear these rumours all the time but it seems more real now,” said Hassan, who had never stepped foot in Bangladesh.

“Many are panicking and living in even more tension but it’s nothing new for our community.

“We’ve lived like this for years because of how the Myanmar government treats our families and when I was locked up for no reason in the [Saudi] detention centre.”

Hassan was held for four years in a Saudi detention centre without any charges against him.

In 2018, MEE revealed that hundreds of Rohingya men, women and children had been swept up in a series of crackdowns by Saudi authorities against undocumented workers.

‘I wonder if Saudi Arabia also asked Myanmar to issue passports for the Rohingya. A right they have been denying us for decades’
– Yasin, former Rohingya detainee

Detainees interviewed at the time said they had held for between one and six years inside the Shumaisi dentention centre in Jeddah without being charged.

Yasin, who has also never been to Bangladesh, was locked up for three years in the Shumaisi centre before being freed earlier this year, when Covid-19 infections spread among the detainees.

“Why is Saudi Arabia asking Bangladesh to give us passports,” Yasin, who was a shop clerk before his detention, told MEE via Whatsapp, requesting his surname not be mentioned for safety reasons.

“I wonder if Saudi Arabia also asked Myanmar to issue passports for the Rohingya. A right they have been denying us for decades.”

Over the last decade, many Rohingya who fled to Saudi Arabia used forged Bangladeshi documents to gain visas as the Myanmar government refused to issue passports to the Rohingya.

Once they entered Saudi Arabia, they lived as undocumented workers, often in low-paid jobs.

But the vast majority of Rohingya living in Saudi Arabia are descendants of those granted residency by King Faisal as a gesture of goodwill to help the minority when it was facing persecution from Myanmar’s army during the 1970s.

Ro Nay San Lwin, a leader of the Free Rohingya Coalition, called on Saudi Arabia to step up and continue to give residency papers to Rohingya inside the kingdom.

“Historically, Saudi Arabia has given Rohingya residency papers despite having no proper travel documents, and it was a great help,” said Lwin.

“But because Myanmar refuses to acknowledge Rohingya as citizens, the Rohingya have had no choice but to get travel papers from other countries to get to Saudi Arabia. But now there is growing pressure [on them] to procure a passport in order to renew these residency permits.

“Rohingya in Saudi Arabia are refugees and they should be given the relevant travel documents.”

Momen said that Dhaka would consider giving Bangladeshi passports to the Rohingya population, but would not repatriate members of the persecuted minority to Bangladesh.

‘The game’: The gamble Bangladeshis take in Libya to reach Europe

Professor CR Abrar, the executive director of the Refugee and Migratory Movements Research Unit (RMMRU) in Bangladesh, noted that any curbs on Bangladeshi migration to Saudi Arabia could be disastrous for the South Asian country.

“This move could have a huge impact on Bangladesh. Saudi Arabia represent its largest labour market, with Bangladeshi workers in different sectors, from construction to menial work,” said Abrar.

In 2018, Saudi Arabia deported to Bangladesh dozens of Rohingya who were detained in a Saudi detention centre for an indefinite period of time.

Former UN Special Rapporteur to Myanmar Yanghee Lee condemned the Saudi deportations of Rohingya and urged Saudi Arabia to give them refugee protection.

Abrar said he believed Riyadh was abdicating its responsibility “as leader of the Muslim world and custodian to the two holy mosques” by offloading the Rohingya to Bangladesh.

“These reports are beyond normal diplomatic practice and a breach of international norms, unless there is an explicit arrangement,” Abrar told MEE.

“The whole world is waking up to the realities of the crimes perpetrated by the Myanmar army and now you [Saudi Arabia] are asking a third country to take in the Rohingya.”