(CNN)It was the moment when Donald Trump’s “Art of the Deal” fabulism, billionaire tycoon bluster and populist standard-bearing for forgotten Americans was revealed to be what it always looked like: a sham.

A stunning New York Times exposé of the President’s tax returns Sunday revealed a pitifully inept businessman and a serial tax avoider crushed by massive debts that could expose him to conflicts of interest given his position as President and power to help undisclosed lenders. 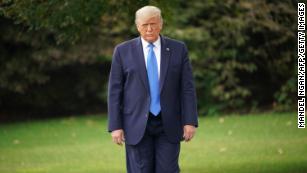 New York Times: Trump paid no income taxes in 10 out of 15 years beginning in 2000
Trump refused to talk about his tax returns and blasted the Times report as “totally fake news” on Sunday. But the article portrays the anti-elite crusader who rails against a corrupt system as actually using its loopholes to avoid paying any federal taxes at all in 10 of 15 years beginning in 2000 by writing off his own staggering losses.
In 2016 and 2017 each, Trump paid just $750 in federal income taxes — far less than many Americans who are working hard amid a deep recession to stay afloat. Trump took huge deductions — including $70,000 to take care of his hair — and also appeared to write off hundreds of thousands of dollars paying his daughter Ivanka as a consultant to the Trump Organization, according to the Times report. The story also reveals the extent to which Trump’s status as President is being used to shore up his losing ventures — for example his hotel in Washington, DC, and his golf resorts.
“This is a con man in the White House,” presidential historian Douglas Brinkley told CNN Sunday, referring to a President who shattered convention by refusing to release his tax records to the public while running for office.
Tony Schwartz, who penned Trump’s book “The Art of the Deal,” said even he was surprised by the “sheer brazenness” of Trump’s behavior, remarking to CNN’s Anderson Cooper that it revealed the “kind of mind that would think ‘I can get away with paying no taxes on hundreds of millions of dollars in income.'”
The publication of the deeply reported article, based on more than two decades of his tax information obtained by The Times, comes just two days before the first presidential debate and 37 days before an election in which he is trailing Democrat Joe Biden. It poses a grave challenge to a presidency that we now know Trump may need to preserve to outrun creditors with hundreds of millions of dollars in loans soon coming due.
It leaves the President facing multiple questions about his morals, behavior — and patriotism since he appears to be paying more in taxes to several foreign nations than he is to Uncle Sam. The reporting also raises the possibility that Trump’s deceptive accounting, already the focus of several investigations in New York, could open him up to serious legal issues when he leaves office.
The Times report, for instance, says that the President has been battling the Internal Revenue Service for years over whether losses he claimed should have resulted in a staggering tax refund of $73 million.

A debate opening for Biden

In the short-term, the New York Times report gives Biden a golden opportunity to put Trump on the defensive during their first debate in Cleveland, Ohio, on Tuesday evening.
In recent days, Biden has sought to undermine Trump’s good approval ratings on the economy by billing the election as a contest between Scranton, Pennsylvania — where he was born — and Park Avenue. Trump’s complicated and self-serving tax arrangements play directly into this construct. While the President’s most loyal devotees may not be shifted by such an attack, it is hard to see how it does not damage him among wavering blue-collar voters in the post-industrial heartland in states like Michigan, Pennsylvania and Wisconsin, which are crucial to Trump’s narrow pathway to 270 electoral votes.
more: