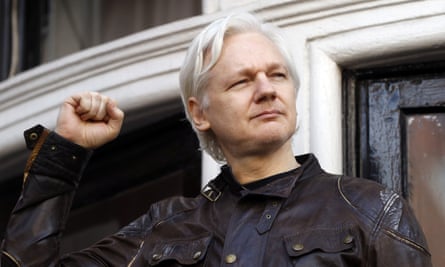 Julian Assange outside the Ecuadorian embassy in London in 2017. Photograph: Frank Augstein/AP

Two political figures claiming to represent Donald Trump offered Julian Assange a “win-win” deal to avoid extradition to the US and indictment, a London court has heard.

Under the proposed deal, outlined by Assange’s barrister Jennifer Robinson, the WikiLeaks founder would be offered a pardon if he disclosed who leaked Democratic party emails to his site, in order to help clear up allegations they had been supplied by Russian hackers to help Trump’s election in 2016.

According to a statement from Robinson read out to the court, the offer was made by the then Republican congressman Dana Rohrabacher and Trump associate Charles Johnson at a meeting on 15 August 2017 at the Ecuadorian embassy in London where Assange was then sheltering. At the time he was under secret investigation by a US grand jury.

Robinson added: “The proposal put forward by Congressman Rohrabacher was that Mr Assange identify the source for the 2016 election publications in return for some kind of pardon, assurance or agreement which would both benefit President Trump politically and prevent US indictment and extradition.”

Rohrabacher said he had come to London to talk to Assange about “what might be necessary to get him out”, Robinson said, and presented him with a “win-win situation” that would allow him to leave the embassy and “get on with his life” without fear of extradition to the US.