Billionaire Chuck Feeney achieves goal of giving away his fortune 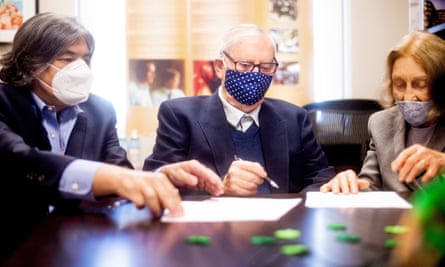 Chuck Feeney (centre) with Christopher Oechsli and his wife Helga during a meeting. Photograph: Noah Berger

Chuck Feeney has achieved his lifetime ambition: giving away his $8bn (£6bn) fortune while he is still around to see the impact it has made.

For the past 38 years, Feeney, an Irish American who made billions from a duty-free shopping empire, has been making endowments to charities and universities across the world with the goal of “striving for zero … to give it all away”.

This week Feeney, 89, achieved his goal. The Atlantic Philanthropies, the foundation he set up in secret in 1982 and transferred almost all of his wealth to, has finally run out of money.

As he signed papers to formally dissolve the foundation, Feeney, who is in poor health, said he was very satisfied with “completing this on my watch”. From his small rented apartment in San Francisco, he had a message for other members of the super-rich, who may have pledged to give away part of their fortunes but only after they have died: “To those wondering about Giving While Living: try it, you’ll like it.

Feeney, who gave most of his money away in secret, said he hoped more billionaires would follow his example and use their money to help address the world’s biggest problems.

“Wealth brings responsibility,” he often said. “People must define themselves, or feel a responsibility to use some of their assets to improve the lives of their fellow humans, or else create intractable problems for future generations.”

Christopher Oechsli, the president and chief executive of The Atlantic Philanthropies, said Feeney would not preach his views to other members of the global super-rich: “But he would scratch his head and say ‘how many yachts or pairs of shoes do you need? What is it all this wealth accumulation about, when you can look about you and see such tremendous needs’.”

Oeschsli said Feeney would not criticise other people for not giving more “but he would be dumbfounded – what is all that wealth about if you’re not going to do good with it?”

He said the one-time $8bn man would encourage the likes of Jeff Bezos, the Amazon founder and world’s richest person who has an estimated $186bn fortune, to “pick a global problem that interests you and invest your wealth and get involved”.

Feeney was influenced by Andrew Carnegie’s essay The Gospel of Wealth, with its declaration that “the millionaire will be but a trustee for the poor”.

“I have always empathised with people who have it tough in life,” Feeney said in a rare interview with Ireland’s RTE in 2010. “And the world is full of people who don’t get enough to eat.”

Feeney has lived a remarkably frugal lifestyle, not owning a car or home, and only one pair of shoes. He was known for flying only in economy class, even when members of his family and colleagues would travel in business class on the same plane.