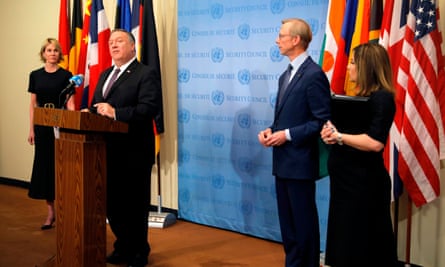 Mike Pompeo is flanked by the US ambassador to the United Nations, Kelly Craft, and US special representative for Iran, Brian Hook, as he speaks to reporters following a meeting with members of the UN security council. Photograph: Mike Segar/AFP/Getty Images

The extent of US isolation at the UN has been driven home by formal letters from 13 of the 15 security council members opposing Trump administration attempts to extend the economic embargo on Iran.

The letters by the council members were all issued in the 24 hours since the US secretary of state, Mike Pompeo, came to the UN’s New York headquarters to declare Iran in non-compliance with a 2015 nuclear deal.

Under that deal (the Joint Comprehensive Plan of Action, or JCPOA), comprehensive UN sanctions on Iran would be restored 30 days after the declaration. But almost every other council member has issued letters saying that the US has no standing to trigger this sanctions “snapback” because it left the JCPOA in May 2018.

The US has said it is still technically a participant because it is named as one in a 2015 security council resolution endorsing the JCPOA. The argument was rejected by France, the UK and Germany even before Pompeo made his declaration.

Since then, Reuters reported that it had seen letters from Russia, China, Germany, Belgium, Vietnam, Niger, Saint Vincent and the Grenadines, South Africa, Indonesia, Estonia and Tunisia, all rejecting the US position.

Only the Dominican Republic has yet to issue a formal letter on the subject. Last week the Caribbean state was the only security council member to back the US when it tried to extend an arms embargo on Iran. Pompeo visited the island two days after that vote.