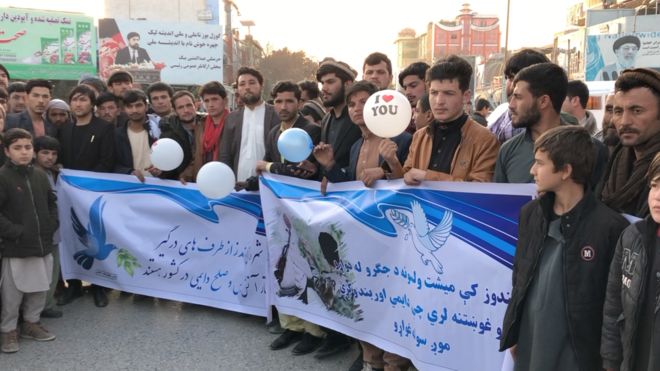 An Afghan flag flutters above the busy roundabout which marks the centre of Kunduz city. Pointing up to it, a policeman standing guard nearby tells me that whenever the Taliban have briefly captured the city, one of their first actions has been to replace the flag with their own white and black banner. They’ve done so twice in the past five years.

Behind us, in a corner of the square, a poster displays the pictures of senior police officials killed here in a suicide bombing during another assault by the insurgents last August.

For now though, the roundabout is host to a small demonstration in support of peace by about 100 young men. Patriotic songs blast out from a speaker – someone in the crowd is holding a large bunch of balloons with “I love you” written on them.

“We’ve come out in support of peace,” says Zahid, one of the demonstrators. “I’m so happy. In the past few days it’s been calm in Kunduz and across the country. We want a ceasefire that lasts forever.”

A week-long “reduction in violence” is coming to an end in Afghanistan after the Taliban, Afghan army and US-led international forces agreed not to launch attacks against each other for seven days.