What next with the ‘deal of the century’?

The so-called “deal of the century” has been widely rejected and loudly condemned. But since no change to the plan has been made as a result, the question that remains is what will happen next?
Israeli Prime Minister Benjamin Netanyahu wanted to implement the annexations as approved by the deal immediately upon his return from Washington at the end of last January. However, he was instructed by Washington to postpone any such action until after the Israeli elections were completed. Maps defining the areas to be annexed also had to be drawn by an American-Israeli committee.
The Israeli elections are due within days; on March 2. The maps are also being prepared by the tasked committee. This leaves no doubt that within the next weeks, Israel will declare annexations relating to the settlements and the Jordan Valley. As a matter of fact, Israel has already declared its intention to expand the existing settlements by building thousands of new housing units around Jerusalem.

Will the response to such additional expansionist plans stir a fresh round of protests and condemnations from the Palestinians, the Arabs — may be some of them — and some others? Most certainly yes. But, what next?

If the usual past-decades-pattern of “Israeli action on the ground faced by verbal Palestinian condemnation” can help as a guideline, then the Palestinians will condemn the upcoming annexation once again. They will add one more item to a very long list of grievances and wails against a systematic usurpation of their country during the last hundred years.

The Israeli colonisation of the Palestinian occupied land — I am just referring here to the post-1967 era, when the West Bank and East Jerusalem were occupied — started immediately after Israeli invading forces in June 1967 completed their occupation of the entire area of Palestine. Although the Arab lands that were occupied in that war were defined under international law as occupied, and should as such be strictly subjected to the provisions of the relevant international conventions that prohibit any change to it until the end of the occupation, Israel started its colonisation of Palestinian, Syrian and Egyptian occupied territories as early as 1967.

With respect to the Palestinian territory, no amount of condemnation, rejection and protest from the Palestinians or the Arab states has had any effect on a 53-year-old colonisation scheme, ongoing till this day. The result is close to 800,000 Jewish settlers in more than 130 illegal Jewish settlements all over the West Bank and in Jerusalem, leaving not much territory for the ‘imagined’ Palestinian state on the 1967 borders under the ‘imagined’ two-state solution formula.

But that is not, and should not be reason for complacency on the part of the Palestinians. We know that the United Nations has failed to implement its resolutions regarding the gross injustice inflicted upon the Palestinians and its tragic results decade after decade. We also know that the entire UN system has long ceased to be effective, except where it serves the direct interests of the very few influential powers, even when such interests are not that compatible with the provisions of the UN Charter. But this is the reality that may not change for a while.

And yet, the UN remains the right place for defining rights where international disputes are concerned and it did well in defining the Palestinian rights. For that reason, Israel never wanted UN involvement in this historic conflict, always accusing the UN with bias against it.

Over the years, Israel managed to distance the international organisation by resorting to bilateral dealings, US sponsorship of the peace process, the Quartet (the UN, the EU, The US and Russia) and other frameworks that secured for Israel the convenient political environment. Unfortunately, the Palestinian leadership went along with the trend, ending up becoming Israel’s helper and enabler, under Oslo particularly, to manage the occupation and see the status quo as the right prelude to a permanent solution, legalising rather than ending the occupation; and reducing the Palestinian national aspirations for self determination and statehood to nothing more than seemingly improved living conditions and temporary survival with no rights. Is this not what the Nation State Law passed by the Israeli Knesset means? Is this not what the “deal of the century” specifically dictates?

Evidently, any annexation may not change the reality on the ground. The land designated for annexation is already occupied by Israel and has been so for more than 50 years. Jerusalem was annexed 40 years ago. But this does not mean acquiescence to the abnormal reality by continuing to pant desperately behind the two-state mirage and the many other obsolete peace process gimmicks that only helped Israel buy time to prevent any possibility of Palestinian statehood by creating irreversible facts on the ground as we clearly see right now.

The real issue is the occupation. The Palestinians, with strong Arab support, should focus on ending the Israeli occupation and the removal of the settlements as was the case of the Sinai settlements, and as required by international law. This goal was evaded years ago in favour of an elusive, ambiguous, undefined and a hollow peace process.

It is time that the Palestinians exit the cycle that after decades of sterile negotiations landed them in this detrimental abyss. It is time to formulate a new strategy to put their cause on the UN stage, demanding firmly and clearly that the occupation should end and the legitimate Palestinian rights, as defined and recognised by the UN, should be addressed justly and rightly.

The Palestinians should exercise their legitimate rights to liberate themselves and to restore normal existence as they deserve and as all other nations do. This is the right road to peace, security and stability for the region and its people. This is the way to end the century-old conflict, the resulting uncertainty and violence. 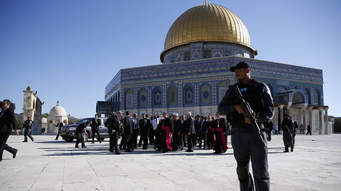 Tagged as: deal of the century, occupation, peace, settlements