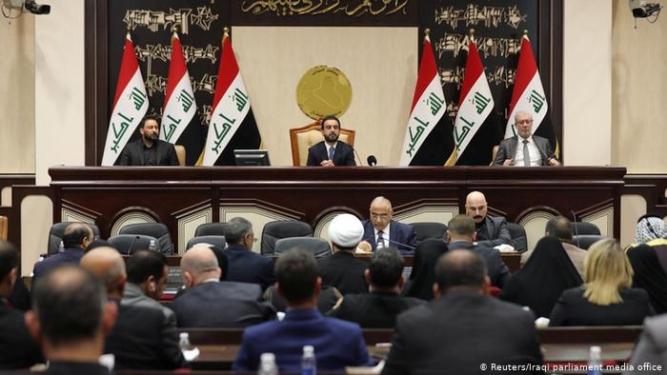 The Iraqi parliament has voted for a resolution to ask the government to end the agreement to host US troops in Iraq. The move would essentially oust US troops and all other foreign troops from Iraq.

The Iraqi parliament voted on Sunday to remove US troops from Iraq.

In an extraordinary session, lawmakers voted for a resolution to ask the government to end an agreement with Washington to station 5,200 troops in Iraq.

The resolution specifically calls for ending a 2014 agreement that allowed Washington to send troops to Iraq to help in the fight against the “Islamic State” group.
Read more: Pressure mounts in Iraq to boot out US troops

“The government commits to revoke its request for assistance from the international coalition fighting Islamic State due to the end of military operations in Iraq and the achievement of victory,” the resolution read.

“The Iraqi government must work to end the presence of any foreign troops on Iraqi soil and prohibit them from using its land, airspace or water for any reason.”

What does the resolution mean?

The resolution is non-binding, but it is likely to be heeded by the government as caretaker Prime Minister Adel Abdul-Mahdi supports the measures.

The resolution was passed two days after the US killing of Iranian Major General Qassem Soleimani in Baghdad, Iraq by airstrikes.

“The parliament has voted to commit the Iraqi government to cancel its request to the international coalition for help to fight IS,” parliament speaker Mohammed Halbusi announced.

“I consider this a weak response, insufficient against American violation of Iraqi sovereignty and regional escalation,” Sadr, who leads the largest bloc in parliament, said in a letter to the assembly read aloud by a supporter.