He is Allah, the Creator, the Maker, the Fashioner. His are the most beautiful names. All that is in the heavens and the earth glorifies Him, and He is the Mighty, the Wise. (Al Quran 59:24/25)

Painting by Michelangelo in Sistine Chapel in the Vatican, representing the creation of man by God the Father.  Additional suggested reading: Only 27% in Western Europe Believe in God of the Bible

For a decade and a half, the Pew Research Center has asked Americans what they believe about the origins of humankind, most often in a two-step process. An initial question asked respondents whether they think humans and other living things have evolved over time – in line with Charles Darwin’s theory of evolution – or whether they believe humans have existed in their present form since the beginning of time, as in the Book of Genesis’ creation story. Those who said they accept the idea of evolution then have been asked a second question: whether they think evolution has occurred due to natural processes such as natural selection, or due to processes that were guided or allowed by God.

Recently, however, the Center conducted a survey in which respondents were randomly assigned to be asked about evolution in one of two different ways. Half of the respondents were asked about evolution in a two-step process much like the one described above. The other half of respondents were asked a single question about their views on evolution and given three response options: “Humans have evolved over time due to processes such as natural selection; God or a higher power had no role in this process”; “Humans have evolved over time due to processes that were guided or allowed by God or a higher power”; or “Humans have existed in their present form since the beginning of time.” 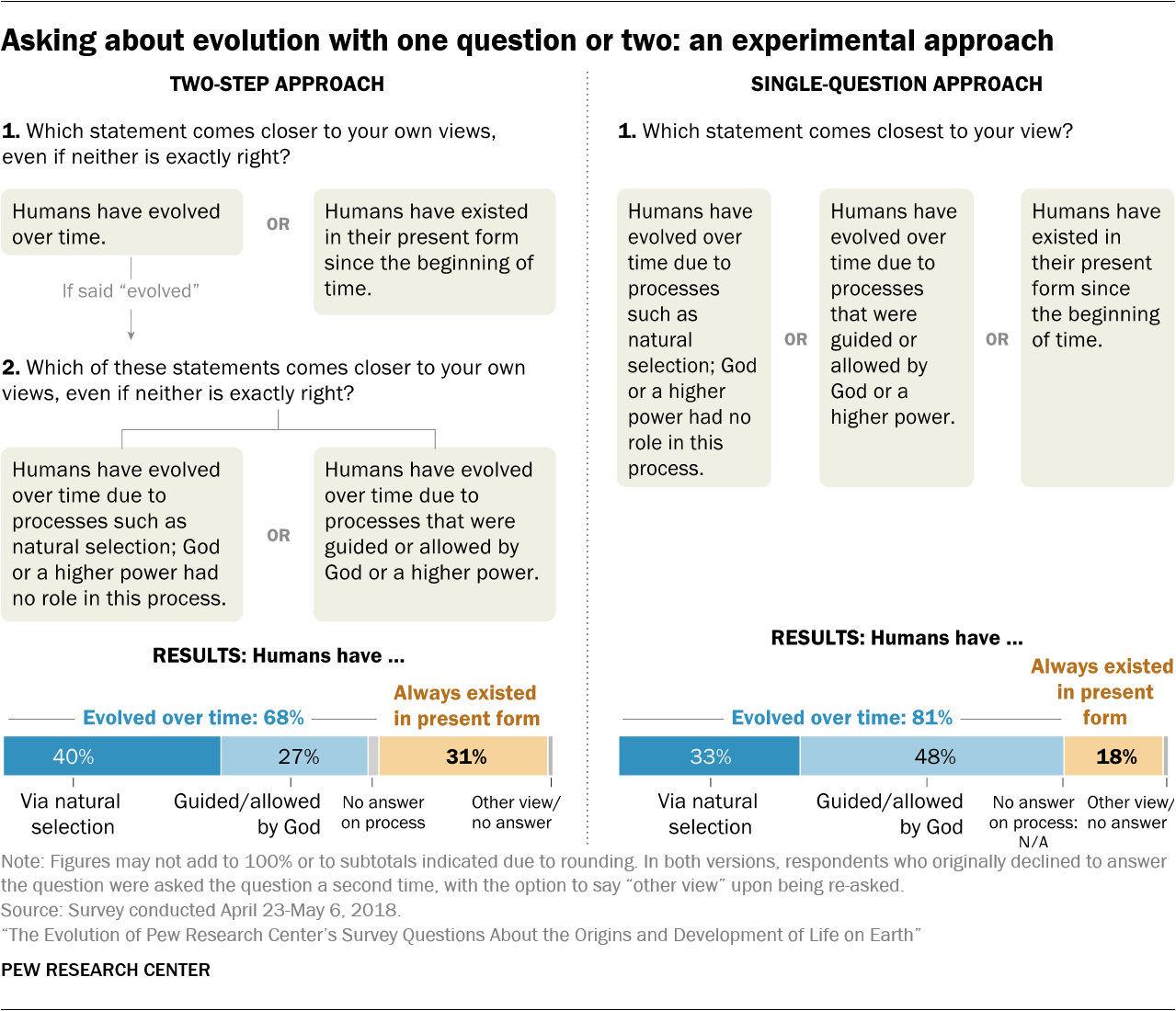 When asked in this single step of three questions shown in the right half of the above table, we find that 48% believe in guided evolution, whereas 33% believe in blind evolution and only 18% believe in creationism and deny evolution.

So, a large majority of the Americans do believe in guided evolution and all together 67% believe that we are the creation of All Knowing God, through the process of evolution over the billions of years or otherwise.

It is easy to conceptualize guided evolution in a scientific paradigm of modern day physics, just like Almighty God can now influence any part of nature, possibly at the quantum level and grant us our prayers without violating the laws of nature, He has always had Omnipotence  and guided evolution over the millennia, without leaving any firm finger prints.  In other words both the agnostics / atheists and the believers see evidence of biological evolution and it is only their metaphysics that decides, if it was guided or blind.

Arguments for evolution being blind or guided are not part of this article, for that I suggest other articles: Evolution: Natural Selection or Divine Choice?, A challenge for Dawkins: Where did carbon come from? and Ten Raised to Five Hundred Reasons for Our Gracious God.

In the Christian art God the Father has always been presented as an old man and Jesus, who was born to Mother Mary around 1 AD and put on cross at a young age of around 33, is always depicted as a young man and holy Ghost as a dove.

Jesus and the Sermon of the Mount.  See the difference between the son and God the Father

In the Christian theology there is always some conflation between the three identities of the holy Trinity.  But, when the Christians think of the creation or guided evolution of our universe and of life on our planet earth, they are not thinking of the dove creating the universe or Jesus son of Mary doing the job. It is always God the Father.

This point was again powerfully made to me, when I visited Rome this October with my wife.  During our trip to the Vatican, our tour guide showed us all the accomplishments of Michael Angelo, the foremost of which was the ceiling of the Sistine chapel, with its most famous section of an old man touching the finger of naked Adam; clearly a reference  to creation of mankind by God the Father.

When Baylor University researchers asked their 1700 Christian participants about what they think God looks like, 60 percent drew abstract or nature scenes.[1]

Stated in another way, the sons and daughters of the Abrahamic faiths, believe in a Deist God, Who is the Creator of our universe and is Transcendent, beyond time, space and matter.

The holy Quran repeatedly makes a case for the Creator God, Who has made the heavens and the earth and whatever is between them and all forms of life on our planet including humanity. For example:

He has created the heavens without any pillars that you can see, and He has placed in the earth firm mountains that it may not quake with you, and He has scattered therein all kinds of creatures; and We have sent down water from the clouds, and caused to grow therein every noble species. This is the creation of Allah. Now show me what others beside Him have created. Nay, but the wrongdoers are in manifest error. (Al Quran 31:10-11/11-12)

The Trinitarian Christians may have some historical confusions about Trinity, but when it comes to creation, a large majority of them believe that God is the Creator and He has guided evolution as noted in the recent Pew survey.

When it comes to God the Creator it is indeed God the Father that the majority of the Christians believe in like Michael Angelo did, when he painted the Sistine chapel and in so doing they are like all the Muslims and the Jews and exactly in line with the Quranic prescription.

Only 27% in Western Europe Believe in God of the Bible

Pew Research Center: Democrats are less likely to say they believe in the God of the Bible than Republicans (45% vs. 70%)

Nine-in-ten Americans believe in a higher power, but only a slim majority believe in God as described in the Bible

Stephen Colbert’s explanation of God starts with a story about broccoli. It’s not necessarily funny