Reality Check: Syria war: Who benefits from its oil production?

President Donald Trump says he expects the United States to benefit by millions of dollars per month from Syria’s oil revenues while US troops remain in the country.

The Syrian President Bashar al-Assad has responded by accusing the US of “stealing oil” from his country and Russia, a major supporter of Mr Assad, has called it “international state banditry”.

So who currently controls Syria’s oil production and who benefits from it?

“We’re keeping the oil, remember that. We want to keep the oil. Forty-five million dollars a month.”

The US announced a withdrawal of its forces from northern Syria in October, but has since said it would retain around 500 troops to guard oil facilities, along with Kurdish-led forces, who are currently the main beneficiaries of the production.

US Defence Secretary Mark Esper has said US troops are there to guard against not only Islamic State fighters but also Russian and Syrian government forces.

For their part, Russian forces are helping Syrians try to regain control of oil production and have their eyes on these facilities.

It’s in this context that President Trump has declared his own interest in benefiting from the oil his troops are defending.

It’s about money and it’s about oil….Of course we are angry, every Syrian is angry. This is looting.”

Bashar al-Assad
Syrian President
How much oil does Syria produce?

The oil and gas sector has been a crucial contributor to Syrian government revenues, even though its reserves are small compared with those of other countries in the Middle East.

The oil fields are concentrated in the province of Deir al-Zour, in eastern Syria, near the Iraqi border, and Hassakeh in the north-east.

But the country’s oil production has collapsed since the conflict began in 2011.

In 2008, Syria produced 406,000 barrels per day (bpd), according to the British Petroleum Statistical Review of World Energy for 2019. 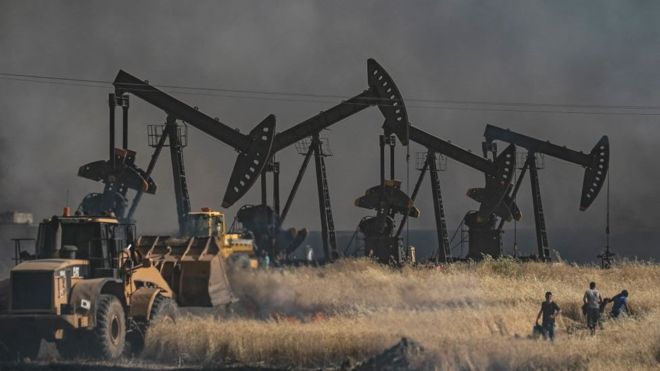