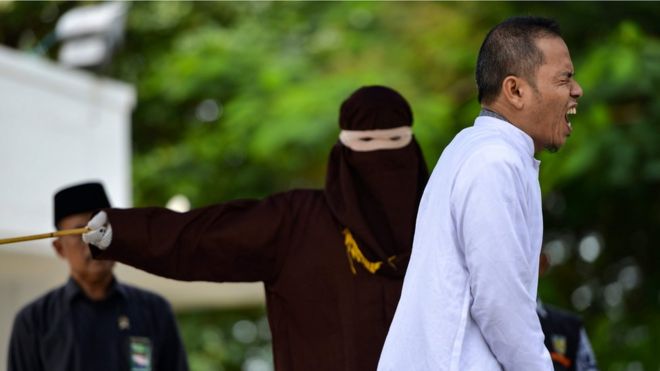 An Indonesian man – who worked for an organisation that helped draft strict adultery laws – has been publicly whipped after being caught having an affair with a married woman.

The woman he had the affair with was caned 23 times.

Mukhlis is from the deeply conservative Aceh region, the only place in Indonesia which practises the strict Islamic law, Sharia.

Gay sex and gambling are also punishable by public caning in Aceh.

“This is God’s law. Anyone must be flogged if proven guilty, even if he is a member of the MPU,” Husaini Wahab, the deputy mayor of Aceh Besar district, where Mukhlis lives, told BBC News Indonesia.

The couple were caught by officials in September, apparently in a car parked near a tourist beach.

The caning happened on Thursday. Mr Husaini added that Mukhlis would be expelled from the MPU.

The MPU advises the local government and legislature on drafting and implementing Sharia law in Aceh.

In our global village ‘Shariah Law’ is simply not applicable when you allow full human rights to the 5 billion non-Muslims.  Suggested reading: Triple Talaq: The Best Example Against ‘Sharia Law’ and Literalism

‘Islamic Law’: A Myopic Reading of the Quran

Eternal Damnation of the Non-Believers and the Merciful God of the Holy Quran?

Our Collection: Shariah Law or the Secular Law, That is the Question?

Is God Alive or Dead: A Metaphor for the Scriptures from the US Constitution?

I was an Isis sex slave. I tell my story because it is the best weapon I have