At least 25 people killed and more than 300 injured after magnitude 5.8 earthquake hits 22km north of Jhelum.

At least 25 people have beenc confirmed dead and more than 300 injured when a magnitude 5.8 earthquake hit Pakistan-administered Kashmir and areas in Punjab province.

Tuesday’s quake hit 22km (14 miles) north of the city of Jhelum along the boundary separating the agricultural heartland of Punjab province and Pakistan-administered Kashmir, the US geological agency, USGS, said.

Al Jazeera’s Kamal Hyder, reporting from Mirpur near the quake’s epicentre, reported on Wednesday, that many some of those who were injured had serious injuries, and it is likely that the death toll could go up.

He said many residents in the area stayed outside their homes overnight for fear of more aftershocks.

Mirpur police chief Gul Faraz told Al Jazeera that the damage was mainly limited to the area around Mirpur, in Pakistan-administered Kashmir, located about 85km (53 miles) southeast of the Pakistani capital Islamabad.

“Our main road that goes along the canal was badly damaged and a bridge was destroyed. People are being brought in on motorcycles from there,” he said.

Local disaster management officials told Al Jazeera they were still gathering reports from the site of the earthquake, but had received word of damage to infrastructure.

“We have reports of cracks in the roads there,” said disaster management official Ammar Raza Shaikh.
Tahir Mahmood, a senior police official in Rawalakot, about 80km (50 miles) from Mirpur, said “there is a lot of damage to infrastructure [in Mirpur]”.

“Roads seem to have developed cracks and sunk. Lots of vehicles were thrown around.”

Electricity supply to Mirpur and Kotli districts was cut off, the National Disaster Management Authority said in a statement.

A shop owner in Mirpur told local tv channel Geo News that the walls started shaking when the quake struck.
“I knew that it is a strong earthquake. The moment I came out of my shop, the roof collapsed,” he said.

The street he was standing on was filled with debris of the damaged houses and shops.

Ramzan Ahmad, 65, who suffered a head injury and bleeding nose, said he was with his family of seven when his house collapsed.

“We all got injuries,” he told Reuters news agency. “I saw dozens of houses razed on my way to the hospital.”

Indian news agency the Press Trust of India reported that people rushed from their homes and offices in panic in several places, including in Rajasthan, Punjab and Haryana.

The country was also hit by a magnitude-7.6 quake on October 8, 2005, that killed more than 73,000 people and left about 3.5 million homeless, mainly in Pakistan-administered Kashmir. 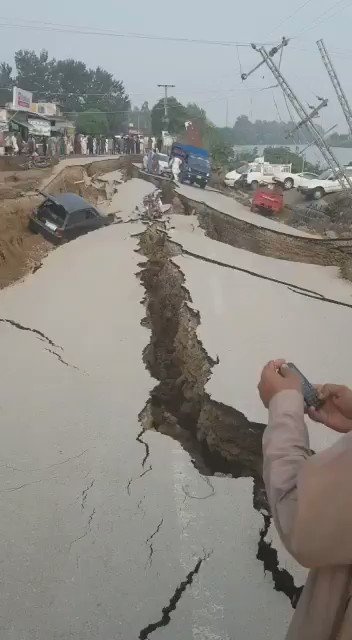