Greenblatt may stay in the role until the publication of the long-delayed plan, which is now due to come out some time after Israeli elections on 17 September. However, if those elections bring about the fall of Donald Trump’s close ally, Benjamin Netanyahu, the plan could be shelved indefinitely.

“Greenblatt’s leaving may have to do with the dim prospects of the so-called peace plan,” said Khaled Elgindy, a fellow at the Brookings Institution, and author of a book on US policy towards the Palestinians, Blind Spot. “What I do know is that it won’t make any difference to what is not really a plan – let’s call it a vision – because there is no chance of it going anywhere.”

Donald Trump tweeted that Greenblatt, one of his former lawyers, would be leaving “to pursue work in the private sector”

.
“Jason has been a loyal and great friend and fantastic lawyer,” Trump said. “His dedication to Israel and to seeking peace between Israel and the Palestinians won’t be forgotten. He will be missed. Thank you Jason!”
Greenblatt tweeted back his thanks to Trump and said the envoy job had been “the honor of a lifetime”.
“So grateful to have worked on the potential to improve the lives of millions of Israelis, Palestinians & others,” the envoy said.

Greenblatt, a real estate lawyer with no experience in diplomacy, began working on the would-be plan in 2017 with Trump’s son-in-law, Jared Kushner, in what the president has said would be the “ultimate deal”.

It was reported on Thursday that a 30 year-old Kushner aide, Avi Berkowitz – who graduated from law school in 2016 and has no Middle East experience, would take over some of Greenblatt’s role, while the state department’s special envoy for Iran, Brian Hook, would broaden his responsibilities to include Israel and the Palestinian territories.

During Greenblatt’s time in office, the US severed its diplomatic links with the Palestinians, closed down its consulate in Jerusalem, and ordered the Palestinian mission in Washington to shut down. Earlier this year, the US cut all aid to the Palestinian territories. 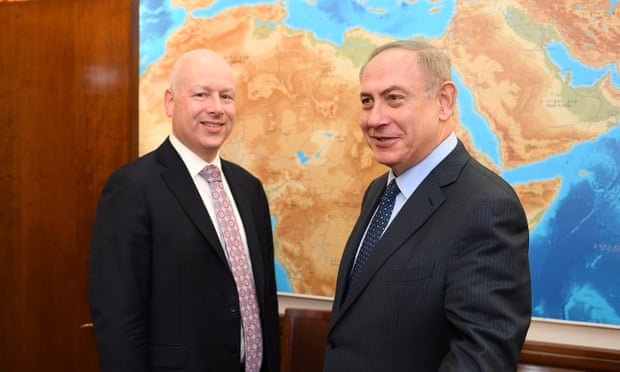