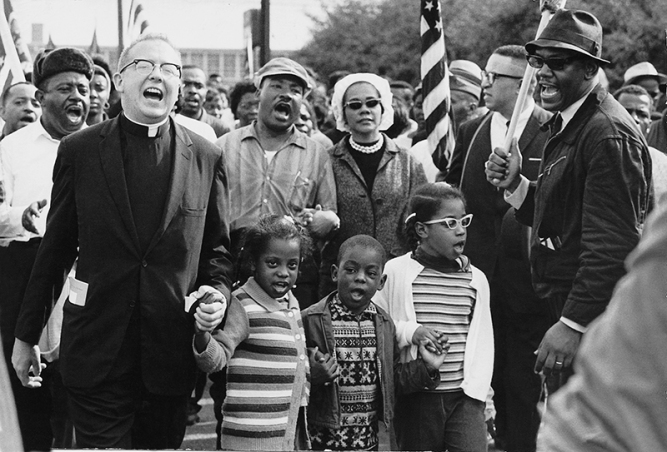 Civil Rights Movement Co-Founder Dr. Ralph David Abernathy and his wife Mrs. Juanita Abernathy follow with Dr. and Mrs. Martin Luther King Jr. as the Abernathy children march on the front line, leading the SELMA TO MONTGOMERY MARCH in 1965. The Children are Donzaleigh Abernathy in striped sweater from left, Ralph David Abernathy, 3rd and Juandalynn R. Abernathy in glasses. Name of the white Minister in the photo is unknown. Photo courtesy of Abernathy Family/Creative Commons

(RNS) — The Catholic nuns who occupied a revered place of awe and fear in my childhood psyche never talked about the the holy tradition of civil disobedience. But these resolute women, who seemed much more concerned with instilling respect for authority, also taught me about justice. Perhaps unwittingly they planted the subversive seed in my head that troublemaking is part of being a disciple of Jesus.

I thought about those long-ago teachers last week when I joined hundreds of Catholic sisters, clergy and lay Catholic advocates on Capitol Hill to raise a collective voice against the inhumane detention of immigrant children on the border.

Inside the rotunda of the Russell Senate Office Building, we prayed the rosary, sang and held images of young children who have died in federal custody. And then we refused to leave. Capitol Police pulled out bullhorns and warned us to disperse. Seventy of us were led out in handcuffs. “We have to put our bodies where our mouths are,” a 90-year-old sister who traveled from Chicago for the action told me earlier that morning.