How Battle of Karbala conditions Iranian mind on Palestinian issue

Saeed Naqvi is a veteran Journalist based in Delhi. He writes extensively on politics and specializes on Pakistan and Middle East.

How Battle of Karbala conditions Iranian mind on Palestinian issue

When the application of normal yardsticks on Iran lead to results which analysts find unexpected, a sort of irritation sets in. This is because of a distinct inability to understand that, with the exception of the Vatican, Iran is the only state where the leadership mindset is conditioned by theological concerns.

The epic battle between good and evil is common to many traditions including the one which brings us good cheer during Dussehra, when Ravana is killed. But these traditions are part of mythology.

Iranians, indeed Shias anywhere, contemplate the epic battle between Right and Wrong in historical terms. The battle of Karbala, fought on the bank of the Euphrates River in Iraq is, after all, an event that took place in 680 AD. The first military probe into India by Mohammad bin Qasim took place in 711 AD. By an amazing coincidence, 711 AD also happens to be the year when Tariq Ibn Ziyad crossed the stretch of water from Tangiers in Morocco and conquered the rock which he called Jabal al Tariq. Jabal means a rock. The British renamed it Gibraltar.

The point is that the Shias latched on to Karbala, a relatively recent event in history, as the ideal for morality and sacrifice. Let me explain. The great achievement of Prophet Mohammad (SAW) was to settle the differences between quarrelling Arab tribes. In fact, Islam taking advantage of the vacuum in global power, soon expanded into an Empire. Fissures reappeared after the Prophet’s (SAW) death in 632 AD. By 680 AD, a usurper, Yazid, entrenched as t 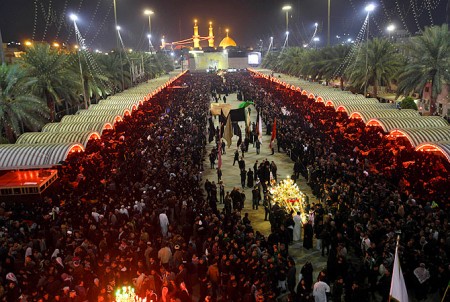 Worshippers gather outside Imam Hussein shrine, seen in the background, to mark the Muslim festival of Ashura, an important period of mourning for Shia’s in Karbala.—Photo by AP

he Governor of Damascus, turned to the Prophet’s (SAW) younger grandson, Imam Hussain (RA), to endorse his rule. Legitimacy would always elude him without Hussain’s (RA) endorsement. Relentless pressure caused Hussain (RA) to leave his ailing daughter in Medina and travel to Iraq. On the second of Moharram (September this year) he entered Karbala along with 72 of his closest relatives and friends.

When Hussain (RA)would not submit to Yazid’s dictat, sanctions (note the word) were imposed. In the torrid heat of the desert, water supply from the Euphrates was cut off. Children as young as six months, crying for three days without water would, Yazid had hoped, force a compromise. But on the question of principle, Hussain (RA) refused. On the 10th day of Moharram all male members, one by one went into battle against an overwhelmingly larger army, resulting in martyrdom – inspiring some of the greatest epic poetry of all time. Women of the prophet’s household were taken prisoners. And all because he would not compromise his core principles.

Karbala is the balance in which the clerical elements in the Iranian leadership measure rights-and-wrongs. Much to the discomfiture of Israel, Iran’s consistency on the Palestinian issue derives from these uncompromising belief systems. In other words, the principle of Palestinian rights is non-negotiable. Well, in which case Iran exposes itself to the most comprehensive sanctions Washington has imposed anywhere. But Iran’s Foreign Minister, Javad Zarif told the Asia Society in New York recently: “You must remember we have a PhD in coping with sanctions.”

Zarif could not have meant that it is life as usual in Tehran despite the sanctions. By all accounts, sanctions are hurting. Prices have risen sky high. But is this hurt causing the population to congregate in city squares to curse the regime for having invited US sanctions? Or is the opposite happening? Are people closing ranks behind the regime for standing up to what mural size graffiti in Tehran describes as the “great Satan”?

For a week, shortages of baby diapers caused immense inconvenience. Soon the women in the countryside rediscovered commonsense solutions: cut cloth dipped in Dettol into triangular pieces, then pin the three points below the navel.

Why sanctions are not pinching is that there is sufficient food on the table. For example, meat consumption may have been pruned from four times a week to twice or even once. But there is nourishment aplenty.

Is it possible to apply comprehensive sanctions in a situation where, say, Qatar depends totally on Iranian supplies because of Saudi sanctions? There are loopholes.

The Iranian drama is being played out with a subtle give and take behind the scenes between the hardliner Ayatullah Ali Khamenei and the moderate Hassan Rouhani. Khamenei was always wary of negotiations with the US but it was his good political sense because of which he went along with the public mood for engagement which Rouhani had rightly gauged. But the President exceeded his brief when he called up President Obama during the 2013 General Assembly session. The touch of over eagerness was not Khamenei’s style. But he protected Rouhani, convinced that “Zionist arrogance” will sooner or later hamper the Nuclear Deal coming to fruition. In that sense Khamenei has proved right.

Simmering differences manifested themselves at other levels too. Foreign Minister Javad Zarif, very much the face of the nuclear deal, was slighted by hardliners like Gen. Qasim Suleiman of the Al Quds Brigade causing Zarif to resign. What was the slight? During Syrian President Bashar al Asad visit to Tehran, Zarif, was apparently kept out of some meetings.

The unending chant from Washington and Jerusalem that Iran should become a “normal state” is, in the ultimate analysis, a demand for it to “soften” its stance on Palestine. While all the focus has been on Iran, the Bahrain Conference has with a sleight of hands worked towards formulations for virtually annexing the West Bank.

Not unrelated are developments in Israel. Benjamin Netanyahu must win the September elections if he is to escape prison term for corruption. But such a victory can only be sustained with extreme far right orthodox Jews who quite openly support an apartheid state. And who stands by the side of the Palestinians? Iran, ofcourse. Always the spoilsport.