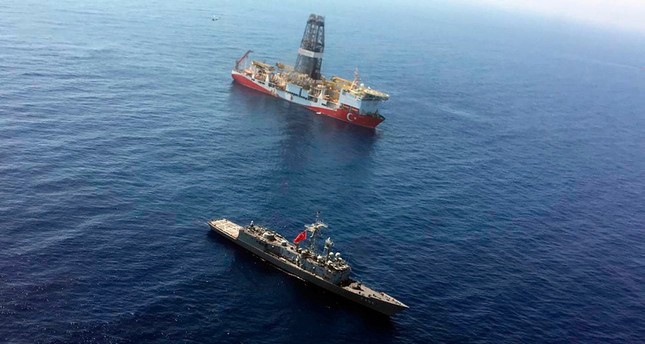 In this Tuesday, July 9, 2019 file photo, a Turkish Navy warship patrols near Turkey’s drilling ship ‘ Fatih ‘ that is making its way towards the eastern Mediterranean near Cyprus. (AP Photo)

Turkey welcomes and fully supports Turkish Republic of Northern Cyprus (TRNC) President Mustafa Akıncı’s proposal for the joint use of Cypriot resources, and cooperation between the two sides in the search for gas off the island, the Turkish Foreign Ministry said Saturday.
The proposal, which was presented through the United Nations, will surely contribute to the development of peace, cooperation and form a basis for a solution to unify the divided island, the ministry added.

Turkey called all interested parties, including the U.N., EU and particularly the guarantor states, to take this opportunity by supporting this proposal and to encourage cooperation on the island’s hydrocarbon resources.

“We reiterate our firm resolve in protecting the equal rights of the Turkish Cypriots over the off-shore resources of the Island in addition to our country’s own continental shelf rights in the Eastern Mediterranean,” the statement said.

“In this respect, we wish to draw the attention of the international community that we will maintain our determined and principled stance in protecting the equal rights of the Turkish Cypriots, until these rights are guaranteed,” it added.

Turkey has consistently contested the Greek Cypriot administration’s unilateral drilling in the Eastern Mediterranean, asserting that the TRNC also has rights to the resources in the area.

Since this spring, Ankara has sent two drilling vessels — Fatih and most recently Yavuz — to the Eastern Mediterranean, asserting the right of Turkey and the TRNC to the resources of the region.

The Turkish-flagged drillship Fatih launched offshore drilling operations this May in an area 75 kilometers (42 nautical miles) off the western coast of the island of Cyprus.

Athens and Greek Cyprus have opposed the move, threatening to arrest the ships’ crews and enlisting European Union leaders to join their criticism.

The island of Cyprus has been divided since 1974 when a Greek Cypriot coup took place after decades of violence against the island’s Turkish community and Ankara’s intervention as a guarantor power. It has seen an on-and-off peace process in recent years, including the latest initiative in Switzerland under the auspices of guarantor countries Turkey, Greece and the U.K. that collapsed in 2017.