John Bolton: the man driving the US towards war … any war

Donald Trump’s national security adviser is stoking tensions with North Korea, Iran and Venezuela, in line with decades of taking the most hawkish position on any given issue 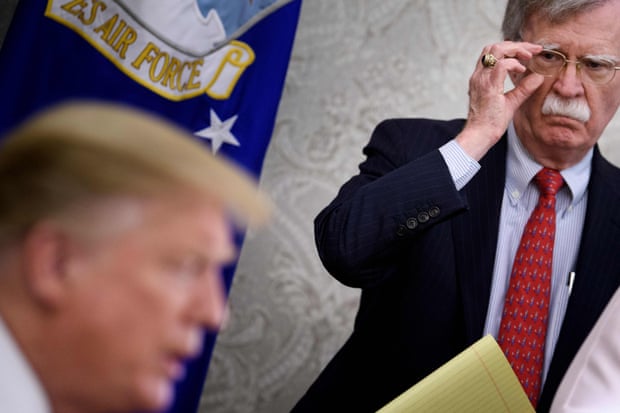 Throughout his career John Bolton has taken Winston Churchill’s maxim that ‘jaw-jaw is better than war-war’ and turned it on its head. Photograph: Brendan Smialowski/AFP/Getty Images

The US is now engaged in three major confrontations around the world that have the potential to degrade into war. And in the driving seat on all three fronts is John Bolton, one of the most fervent believers in American military power ever to work in the White House.
Missouri House passes extreme eight-week abortion ban – as it happened
Read more

Donald Trump’s 70-year-old national security adviser has been a fixture in US foreign policy over the past four decades, and has spent that time, whether in or out of government, mostly arguing for the most hawkish position on any issue put in front of him.
“He actually believes when America leads, the world is a safer and better place – not just for us but for the world,” said Mark Groombridge, who worked for Bolton for more than 10 years.

In the Obama era, Bolton’s bristling walrus moustache was a near constant presence on television, almost always Fox News, from where he would vent scorn and spleen on the Democratic administration.

These days, Bolton looks considerably more cheerful, having reached the peak of the policymaking establishment that had once seemed out of his reach.

Is John Bolton the most dangerous man in the world?
Ben Armbruster
Read more

Bolton seems to have played a key role in the collapse of the second Trump summit with Kim Jong-un in February, when he appeared to have drafted a maximalist list of demands for all-or-nothing disarmament that was presented to the North Korean dictator in Hanoi. A year of diplomacy ground to a halt, and Kim, who had been expecting a more gradualist approach, has now started goading the US with a return to missile tests.

In the standoff in Venezuela, Bolton was again centre stage, making himself the lead US voice for a failed effort at regime change in Venezuela in late April, producing a personal video appeal calling – in vain – on Nicolás Maduro’s top aides to defect. Behind the scenes he has urged a reluctant US Southern Command to come up with ever more aggressive solutions to Maduro’s hold on power.

And in the fast-moving escalation of tensions with Iran, it is Bolton who has seized the initiative, spun military deployments in the Gulf that were already in the pipeline as confrontational steps against Tehran, and reportedly irritated some in the Pentagon and intelligence agencies by putting a sensationalist spin on intelligence about Iranian military movements.
Bolton is reported to have convened a deeply unusual meeting on Iran on 29 April, not in the White House, but at CIA headquarters. It was an echo of the buildup to the Iraq war, when Dick Cheney, George W Bush’s vice-president, did the same thing.