Centuries-old Indian paintings have been given a contemporary twist thanks to a Swiss project involving Pakistani artists.

“While the size of the paintings has grown in many cases, the head of figures are mostly still no larger than a thumbnail,” explains Caroline Widmer, curator of Indian paintings at Museum Rietberg in Zurich.

The Swiss museum, which has an extensive collection of Asian art and artefacts, is putting a new face on these old works of art. It offered art students from Pakistan the opportunity to create contemporary miniatures inspired by Indian paintings from its collection that date as far back as the 15th century. Traditionally used to depict royal or mythological figures having a good time, the contemporary versions tackle life in modern Pakistan.

“They did not just reproduce old subjects and techniques but transformed them with new ideas. It is art like we understand it to be today,” says Widmer.

Modern-day miniatures
In the old days, Indian yellow was a signature colour used in miniature paintings. These works of art are small and very detailed thanks to the use of fine brushwork. However, the bright yellow colour was allegedly obtained from the urine of malnourished cows fed only mango leaves. Concerns for animal welfare have resulted in the development of alternative pigments, but many aspects of the discipline remain the same for modern-day miniature painters.

For example, semi-precious stones are still ground for colour and gum Arabic is used to make the pigments stick to the fine Wasli paper, used especially for miniatures. Artists continue to use very fine brushes with the finest as thin as “a hair on a squirrel’s tail”, as Widmer puts it.

Traditionally, miniature paintings were meant to be held by hand and viewed up close, one person at a time. Today, the paintings are larger as they are often mounted on a wall. However, artists still endeavour to maintain traditional proportions.

New generation
The Pakistani students from the Lahore National College of Arts were given a choice of 100 miniatures from the museum’s collection to interpret. Shahid Malik chose an 18th-century work showing Hindu God Shiva meditating in the Himalayas. Malik’s version is less pristine, with rubbish strewn around.

“Lahore has a large landfill that is almost 300 feet high. As there are no mountains in this region, the landfill mountain becomes part of the landscape,” he told swissinfo.ch.

His work aims to depict the changing environment in his country. Malik is very happy to have his work shown in a different place.

“As a lot of tourists visit Switzerland, my work will be seen by many people,” he says.

Eesha Suhail was also invited to show her work at the Rietberg museum. The 22-year old has only been a professional artist for two years. She chose an 18th-century miniature depicting Mughal emperor Jehangir (father of Shah Jahan who commissioned the Taj Mahal) with his last wife Nur Jahan. In her version, she replaced the monarch with multiple versions of herself.

Jahangir and Nur Jahan in the Rambagh (Awadh, India, 1780). Artist Eesha Suhail replaces the figures in the original painting with multiple versions of herself in her home.
(Museum Rietberg, Zurich) 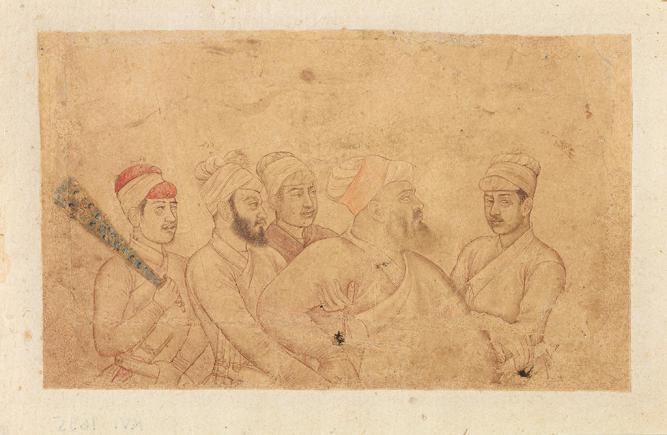 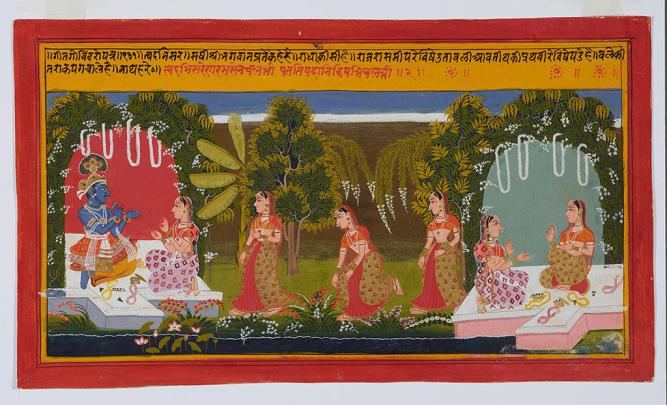 environment. I decided to portray myself in my home doing ordinary things like them,” she says.

Art form lives on
Over 20 former arts students from the Lahore National College of Arts participated in the Swiss project. Most of them know each other and were invited to contribute by the head of department Quddus Mirza, who is a well-known art critic in Pakistan.

Siyavosh and Afrasiyab meet at the Jihun river (Gujarat/Bundelkhand, India, 1425-1450). Ifrah Mehmood Afridi alludes to the partition of British India into two countries in 1947 and how that still shapes Pakistani identity today.
(Museum Rietberg, Zurich)

Donia Qaiser, a former student who now teaches miniature painting, remembers how she decided to dedicate herself to the discipline.

One of the objectives of the exhibition – that runs until June 16 – is to show that the art of miniature paintings is not dead but living on with new ideas. It has influenced contemporary art in Pakistan but is also undergoing changes of its own. 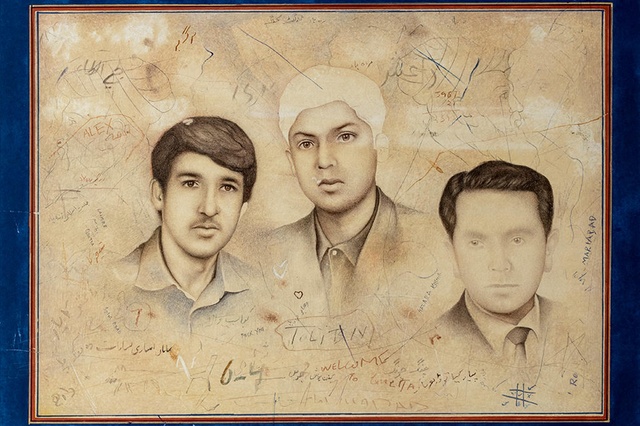 “Miniature painting is the most thriving art form today in Pakistan,” says Qaiser. “Today’s miniature painters are challenging the boundaries of the tradition yet keeping its essence intact. Let’s see where it leads.”